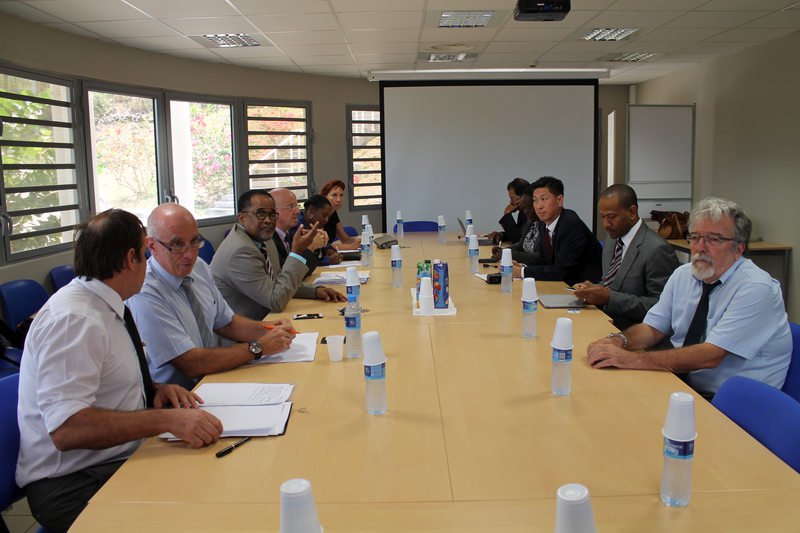 MARIGOT–The health authorities of both sides of the island met Saturday in the Louis-Constant Fleming Hospital to further discuss cooperation and the sharing of skills and resources between the two hospitals, the main ingredients for a Memorandum of Understanding (MOU).
Those taking part in the meeting from the French side included Director of the Louis-Constant Fleming Hospital Roland Toussaint, Director of Agence Regional de la Santé (ARS) Patrice Richard, Territorial Délégué for the ARS Pascal Godefroy, President of the Health Observatory Dr. Louis Jeffry, Second Vice-President of the Collectivité Ramona Connor, Chef de Cabinet for President Aline Hanson Pierre Brangé, and a representative from the Préfecture.
The Dutch-side delegation was headed by Minister of Health Emil Lee, accompanied by Head of Department of Public Health Fenna Arnell.
“Today we are in a very specific context where the proposal for a new hospital on the Dutch side advances the dynamics of cooperation between the two territories,” commented Jeffry after the meeting. “We are also in the context of interregional cooperation under the INTERREG V project on health in St. Martin and in the rest of the French departments of America (FDA).”
“In this context the Minister of Health on the Dutch side must defend the creation of this new hospital at the level of the Government in the Netherlands and its budgets. It was important to have an agreement in principle on the involvement of our hospital in the development of a new offer on the territory, a medical establishment on the Dutch side that will have 100 beds and be ready at the end of 2019.”
He added: “The idea is that we can provide an offer that is complementary and not competitive, that is, to work together on an offer that will eventually be spread over both parts of the island, but which will be not be competitive. It involves sharing of skills and workshop-sharing.”
“For that we need to have this commitment that allows us to go further in this dynamic. A common governance needs to be put in place, to have joint workshops for everything concerning adapting legislative issues, ethics, medical practices, communication, and cultural and linguistic adaptation. All this data we must exchange, and lastly it is about the exchange of health professionals and the ways the two hospitals can work together and exchange resources.”
French-side hospital director Toussaint remarked that the level of decision-making with regard to health was uneven on both sides.
“We do not have the same social schemes, or the same coverage in terms of insurance but we share a common destiny. If ever there is fire, a plane crash, a big accident, an earthquake, we are obliged to cooperate with each other. For all these reasons, we have tried to find common ground to work together. Sint Maarten proposes to build a new hospital with 100 beds and instead of the hospitals being in competition with each other, we decided to be complementary.”
“Today, if a French citizen has an accident on the Dutch side he is obliged to go to the Dutch hospital and vice-versa on the French side. Currently emergency services are working together to take that person to the location where he or she will be best taken care of. We hope in the future to have support and agreements between French social security and Dutch-side insurance companies.”
With regard to the Dutch side, it was understood the MOU has to be ratified by the Council of Ministers (CoM) before it can be signed and come into effect. This should take about 15 days. The respective authorities estimate the cooperation measures will take two years to implement and should coincide with the opening of the new Dutch-side hospital.