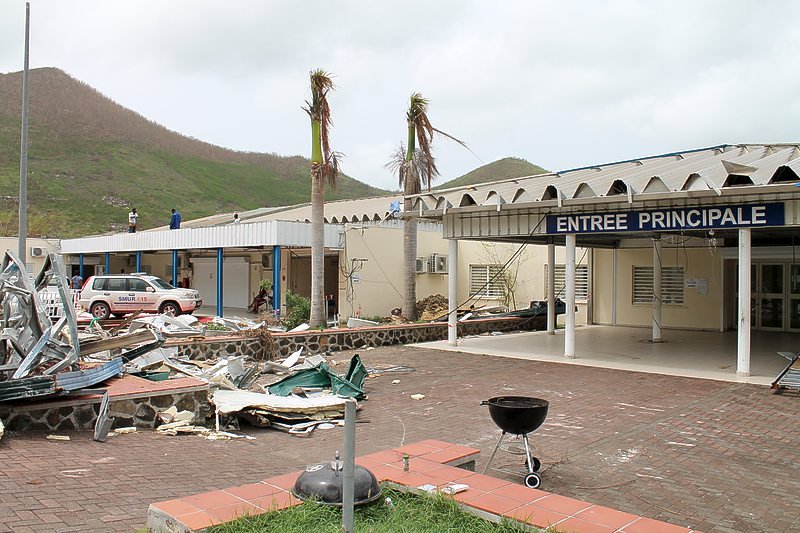 MARIGOT–The hospital in Concordia sustained damage in all its departments and wards from the hurricanes, but is functioning reasonably well under the circumstances some three weeks after the disaster, Director Francisco Moreno indicated Tuesday.

“Most of the damage has been to the roof and flooding in all areas of the building, including the medical wards,” said Moreno. “But now most of the services are back up and running even though we are working at a reduced capacity.
“We have a lot of electrical and fire prevention work to do. We have sufficient doctors and nurses, but they have been working many long hours and need a rest. Having said that, we are receiving assistance from the hospital in Guadeloupe and from sanitary reservists in France.”
He said the 90 beds available before the onset of the hurricanes had been reduced to 17, but 16 more beds will become available in October as wards are cleaned up and repaired. There is also a building adjacent to the hospital that has been emptied to accommodate more patients. He said two emergency mobile hospitals that authorities said would be brought in before the arrival of the hurricanes had not arrived.
Moreno said the hospital had been treating patients with injuries even during the first hours of the hurricane, and afterwards. He did not have the number of patients treated at hand, but evidently the emergency room was very busy. In the immediate aftermath all communications were down, which made it very hard to work effectively, he added.
“The impact of the hurricanes has had a profound psychological effect and I think the population will take months to recover from this,” he said. “Even three days after the hurricane many misguided people were coming here thinking that this was the way to leave the island, by getting a doctor’s note.”
He also mentioned the downside of social media producing fake news and reports about the hospital.
“We had a lot of it. I can assure you that no one died in the hospital during the hurricanes. One elderly man did die from natural causes just before Irma and another person who was evacuated to Guadeloupe a day after Irma died on the plane from complications. And Gendarmes were called to the hospital three times because of reports of shootings that turned out to be false,” he said.
As for an estimate of the cost of damage to the hospital, Moreno said he had no idea.
“We have insurance and experts are here assessing the extent of the damage. We have to wait for the report. But I’m confident we will receive all the funds needed from France to build back the hospital better than before,” he said.