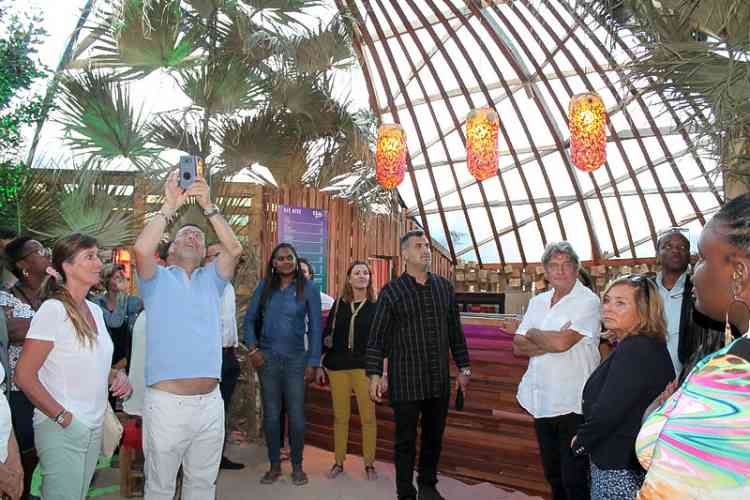 The dome-shaped VIP Lounge has been constructed out of wooden pallets, palm fronds and wire netting among other materials. (Robert Luckock photo)

MARIGOT–Representatives from the board of Association des Hôteliers de Saint Martin (AHSM) and St. Martin Tourism Office have praised the SXM Festival organisers for their contribution to the tourism economy on the eve of the third edition of the festival starting today and continuing through March 17.

Some 5,000 electronic music fans are expected to converge on Happy Bay and other venues over the next few days.

Organisers Julian Arbia and Abdou Elouali gave sponsors, venue hosts and other festival collaborators a tour of the main venue on Happy Bay Beach where the finishing touches are being applied to the various structures and stages.

The main stage, reminiscent of looking into the mouth of a huge shark was decorated with natural foliage and coloured strobe lights. Either side of the stage are two giant feathered birds representing the Phoenix rising from the ashes, in this context the recovery of St. Martin and St. Maarten.

“We are about 95 per cent ready at this moment,” said Arbia.

Inside the stage is where the international DJs perform. Lights and sound systems were being tested.

Not far from the stage was a giant statue of a Taino Indian.

SXM Festival prides itself on recycling natural materials found on the island, hurricane debris, and driftwood for the decoration, and employing talented artists to bring the vision to life.

Further down the beach will be another stage allowing the audience to spread out and make use of the whole beach area. Visitors were shown the food court tents, vendor stands, main bars, and workshop areas where construction for stages and other decorative structures have been going on for weeks. A VIP Lounge has been made out of wooden pallets and palm fronds.

Several artisans were singled out by Julian Arbia for their work in design or construction and were presented with an SXM Festival pendant by AHSM board members.

Welcoming remarks were given by President of AHSM Patrice Seguin and President of St. Martin Tourism Office Valerie Damaseau who noted the Collectivité of St. Martin has contributed 120,000 euros to the event. She also read out a message from President Daniel Gibbs who could not be present.

Last week at the Festival’s press conference launch, Dutch-side Minister of Tourism Stuart Johnson disclosed the St. Maarten Government has pledged US $100,000 to the festival.

An innovation this year at the festival is the introduction of a cashless electronic bracelet system for admission tickets and bar sales. It is being tested at the SXM Festival by Event Brite, the number one San Francisco-based ticketing platform. The bracelet can be topped up via an App. With the matching software and computer screen in the bars, a scan of the bracelet can tell the bartender if the wearer has sufficient credit. The bracelets can also track the number of drinks sold, and how many people are at each venue.

Other festival venues are Loterie Farm on Friday, March 15, and on the Dutch side at nightclubs Lotus, Refuge and Karakter on Simpson Bay Beach.