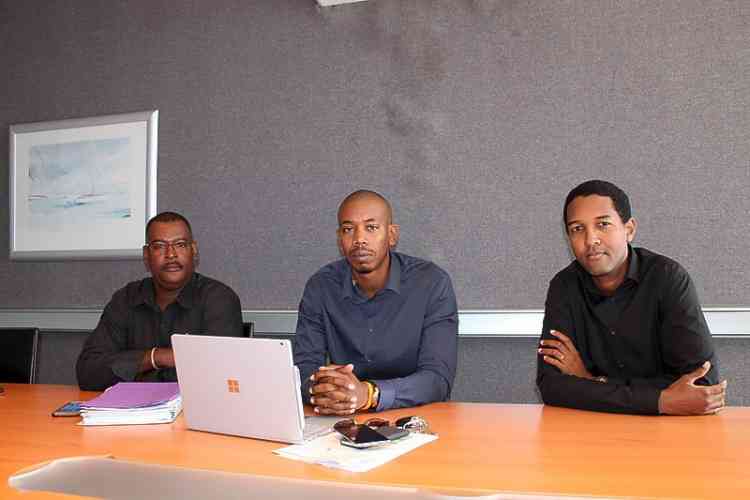 MARIGOT–The Collectivité’s fibre optic deployment plan, originally a four-year plan initiated long before Hurricane Irma, has been reduced to two years for full completion in 2019 thanks to infrastructure damage caused by the 2017 hurricanes, and in part to Electricité de France (EDF) prohibiting all providers from re-installing infrastructure on telephone poles.

Whether four years or two years, it is little consolation for consumers who are without Internet and fixed land lines, currently estimated at 50 per cent of the French side, but according to Territorial Councillor Jean-Sébastien Hamlet in charge of New Technologies and Audio-Visual, to have infrastructure finally buried underground and to have learnt the lessons from Irma, fibre optic technology will be well worth the wait.
“We were actually surprised after the hurricanes to see that so much infrastructure was above ground,” Hamlet acknowledges. “EDF lost 80 per cent of their poles that were used for coverage. That was why the decision was made not to allow any operators to go back on the poles, for security reasons as well. So, providers at that point were left with no options.
“EDF is working in partnership with the Collectivité to put everything underground. It did not make economic sense to do otherwise. With one fibre everyone can connect to it and share. The fibre optic plan is regulated by government entities. All providers will either be able to rent usage or have an option to co-finance in certain districts. The State requires all French regions and territories to have high speed Internet in their fibre optic plans by 2022.”
The company Orange is the authorised “Operateur de Réseaux” to deploy fibre optic and therefore is responsible for service to the population and maintenance, and that has a huge cost.
“We are working with EDF which is digging the trenches and Orange which is laying the conduits for the fibre optic,” Hamlet explains. “Two years ago, it was estimated the deployment cost would be 20 million euros. Orange proposed to finance it from their own funds and have a partnership with the Collectivité. Since Irma everyone now sees the opportunity to invest or go it alone.
“But the Collectivité is sticking to doing it its way. You either have to co-finance with Orange on that district and thus be a co-owner of that fibre, and if you can’t there’s a national price to rent it. Orange in February will start replacing copper in certain districts with fibre optic.”
Hamlet said infrastructure work for installing fibre optic on the French side is progressing faster than people realise.
“Grand Case was the first district to start burying utilities and installing fibre optic in December 2017 and it’s 20 per cent completed with around 300 metres of fibre optic buried and it will be finished by the end of March.
“We have also started on the back road of the airport (Grand Case) with 150 metres so far. Sandy Ground (Rue Lady Fish) is 95 per cent finished. Colombier will start in February and Agrément and La Savane will start in March 2018. I’m talking about fibre optic installed up to outside the front gate. Connection to a private house or apartment building comes under other agreements.
“We are working with EDF based on their plans. And a committee that was set up since November 24 meets regularly with the specialist companies that install the infrastructure, as well as elected officials, Général des Eaux, to be sure it’s all going according to plan.”
According to Hamlet, it’s not clear who has Internet and who does not. There is no breakdown by districts. In the meantime, only temporary solutions are available, such as 4G fly boxes and a few WiFi hot spots, two of which are still available in Marigot.
“Information on numbers per district would be available from the respective providers. MSR says it has no problems with its network. Other providers put up temporary antennas that were illegal and should be taken down.
“The national frequency regulator ANFR proposed to have one robust antenna that everyone could connect to instead of having several antennas. In the event of a hurricane strike just the one antenna could be put up again if it fell. We were discussing this antenna with the providers but while it sounds good on paper, and might be the best way, there are commercial and financial implications, so no decisions have been made yet.”
The Collectivité is working on a definitive document that will provide the guidelines for providers to follow, outlining the rules, the fees, where to connect, etc. These regulations come from Autorités de Regulation de Communication Eléctroniques et des Postes (ARCEP).
Meanwhile, providers are offering solutions to their clients. Dauphin Telecom is compensating by offering its customers 4G mobile phone network to get Internet on their phones. It plans to have 4G Fixed LTE that will give service in the home, but that will not be available until the end of the year. It’s waiting for regulator ANFR to provide the frequencies.