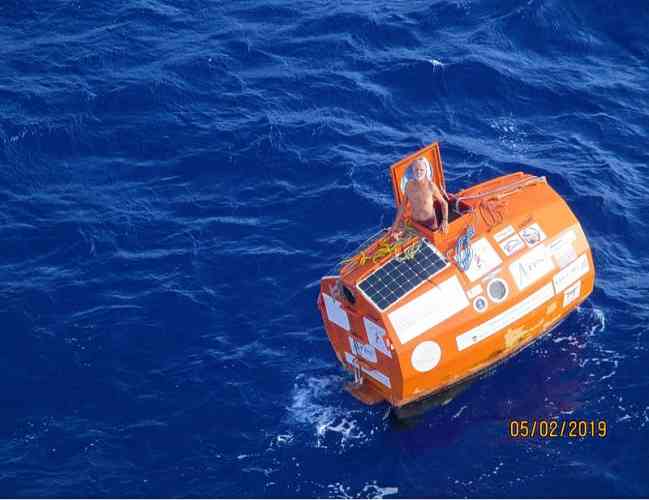 Jean-Jacques Savin of TESA inside his vessel

EUSTATIUS–A 71-year-old Frenchman who left France in a somewhat oversized wine barrel that he converted into a sea vessel in which he was attempting to cross the Atlantic Ocean on his own had to be rescued over the weekend and was offloaded in St. Eustatius.

Statia’s Acting Harbour Master David Dictus said an email had been received from Statia Port Services early on Friday, May 3, with a request for the Port to assist with the docking of a vessel that had called for assistance.

“After receiving this information of what kind of vessel it was and who picked it up, and how and what conditions were, we came to find out that it was a 71-year-old Frenchman,” he said. Dictus said an emergency had been encountered forcing the man, Jean-Jacques Savin of Traversée de l’Atlantique en Tonneau TESA, to issue a call for assistance from the United States Coast Guard, which asked Maritime tanker Kelly Anne to offer assistance to the stranded person.

Statia Port Services agent Carlos “Ghadifi” Houtman said the tanker had come across the stranded vessel off the coast of Santo Domingo and had hoisted the vessel onboard, travelled to St. Eustatius and arrived in port on Saturday, May 4. As the tanker was already en route to St. Eustatius, the Frenchman was offloaded there.

An arrangement was made with NuStar/Statia terminal for line boats to tow the vessel from the tanker to Charles A. Woodley Pier.

NuStar local manager Terrence “Terry” Keogh was seen observing the tanker and the line boats. He then travelled to the harbour to ensure that operations went smoothly. The tanker offloaded the stranded vessel into Statia waters and the line boats then towed it to the pier.

Dictus directed the operations to have the stranded vessel removed from the water and hoisted onto the bed of the boom truck where it then transported into the harbour container area.

Savin appeared to be in good health and there were no signs of any injuries, Dictus said.

After Savin stepped off the barge, the family embraced him. Ingrid served as translator for Savin, who said he had been at sea for about 128 days. He touched the ground and said: “It has been 128 days since I have touched land.”

Many persons drove by the harbour and stopped to see the manmade sea vessel being towed into the harbour Saturday.

Ingrid said it was an honour for Scubaqua Dive Center Statia to welcome Savin to Statia.

“Savin crossed the Atlantic from the Canary Islands to the small island of St. Eustatius on board a simple barrel of six square metres with only the force of currents and winds, without an engine and without assistance. After 128 days of solitude at sea, the maritime tanker Kelly Anne collected Mr. Savin off the coast of St. Eustatius (off Santo Domingo). The barrel was then towed down to the ground and the adventurer laid his feet on the island after more than three months at sea,” Walther said.

Once Savin arrived on the island, Walther said, “The solidarity machine was set up to allow him to enjoy his short stay on the island. The hotel Old Gin House graciously made a sea-view room available and Scubaqua Dive Center Statia helped him in his administrative process before sharing a beer at the edge of the water and a raclette of Swiss cheese.

“Jean-Jacques does not realise so far what he did. He is still in his journey and probably needs a few days before realising his sportive achievement, but he seems to be at least very proud of being successful,” Walther said.

“I admire what he did, it is simply amazing: 128 days in a barrel without any assistance, just in the wild element – what a human challenge. I admire those adventurers who are testing their limits, it is a good lesson for life. I think we all need to meet people such as Jean-Jacques Savin who are simply different from most of us and live a passionate life far different from ours! They manage to reach total freedom away from society and its living rules.”

Savin is expected to journey to Martinique before being taken to France with his barrel. He was congratulated for “the amazing sports achievement” and “this beautifully uplifting human challenge and beautiful life lesson.”