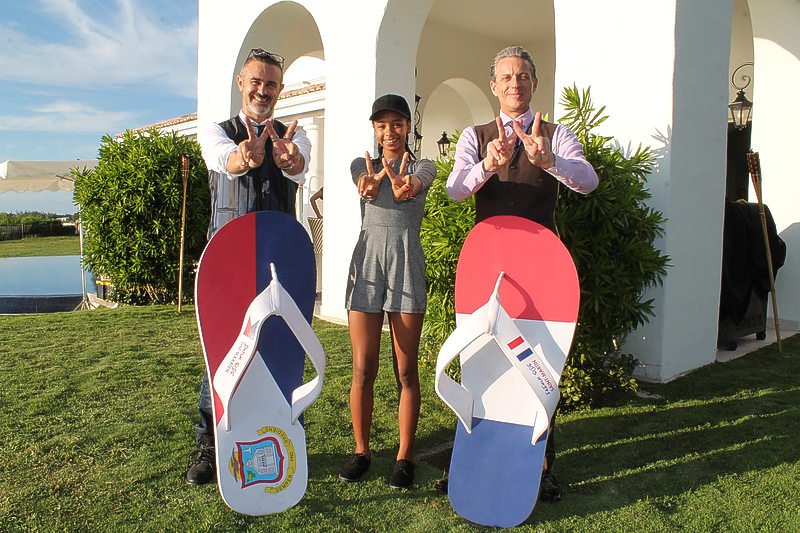 Friendly Flip Flops, the footwear that keeps a foot with respective flag on both sides of the island, was officially launched with a press conference and launch party for promoters and retailers at the Belmond La Samanna Hotel on January 2, 2017.

Beffort told The Daily Herald Thursday a certified letter was hand delivered by a Bailiff of Justice to Conties on March 6, 2017. He said Conties accepted and signed the letter which informed him that his contract would be terminated 10 days later.

“I am now free to share with you that based on document filings, bank records, and contracts that I am attaching with this email, since that time, Florent Conties has continued doing business, representing Friendly and Co., the company we started to execute the vision of “Walking Forward Together,” as his own,” Beffort claims. “He is illegally using my intellectual property, and using the merchandise that was purchased under our original agreement.

“I have been working hard with the police department, legal advisors, and a primary investor to resolve the situation. I was trying to resolve this without bringing attention to his fraudulent activities due to fear that this could hurt the brand, and taint the spirit in which the campaign was created.”

Beffort claims in addition to intellectual property theft, and breach of their original agreement, Conties has sequestrated the goods and marketing materials and made it impossible to deliver to partners Princess Juliana International airport SXM, Taxi Drivers Associations, Grand Case Airport and the Heineken Regatta

“He has interfered with the campaign’s primary goal:  to help multiple groups of needy children on the island and to empower local retailers. Also, I have been locked out of the “Walking Forward Together Friendly Flip Flops financial and email accounts. As the campaign is my intellectual property, any documentation or representation that only shows Florent Conties signature is false.”

Beffort said singer Tamillia Chance, the ambassador of the campaign, should not be considered or represented as an ambassador of what Conties is calling “Walking Forward Together.”

“I am committed to my promise to make her the ambassador of the original campaign I set out to create as I rebuild it. This is a temporary setback which we will get through.”

He continued: “Walking Forward Together is one of the most significant and important things I have done in my life. I want and need to see it thrive. While working with the police in St. Martin, I have been in New York for the past few months forging relationships and alliances with high profile media organizations, newsmakers, and celebrities, in order to keep the brand on the fast upward trajectory it has been on from the start. The promotion and reception that I have received has been incredible, and reminds me of what a great and powerful movement this truly is. We have the opportunity to bring a lot of attention to the island in a very high profile way.”

A reaction to the accusations by Beffort could not be obtained before press time from Florent Conties.