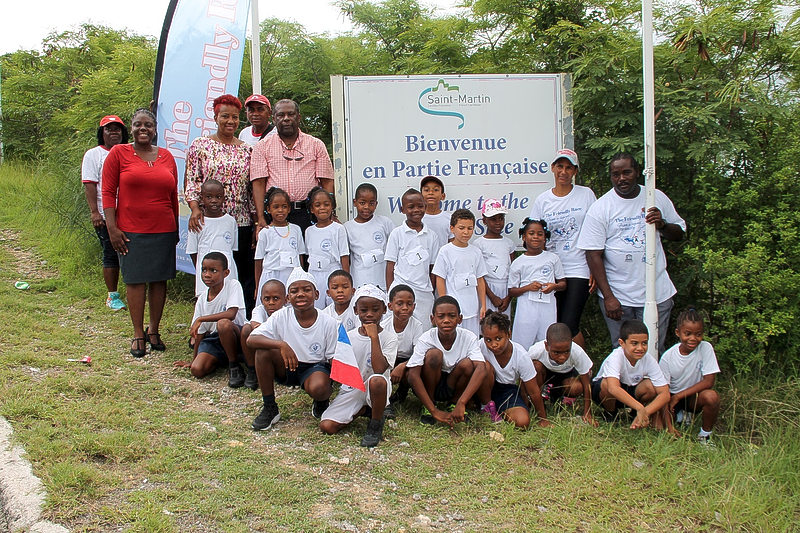 Pupils of both schools pose with education officials of the Dutch and French sides.

PHILIPSBURG–In observance of the anniversary of the partition of the island, students of Methodist Agogic Centre (MAC) Browlia Maillard Campus and Aline Hanson School in Sandy Ground participated for the second year in a friendly running race and a re-enactment of the myth of how the island was divided.   The race was held last week Wednesday from 8:30am to 12:00pm. More than 150 students from both sides of the island participated in the relay race.   The primary goals of the race were to promote cooperation between education institutions on both sides of the island, to develop cooperation based on their common history, to create student ambassadors of peace and friendship, to promote UNESCO’s international values, to strengthen students’ sense of belonging to a “Friendly Island,” to inspire social cohesion by uniting citizens from various backgrounds and to promote a healthy life-style through engaging in sport activities.

Minister of Education, Culture, Youth and Sport Silveria Jacobs met the students at the Lowlands/Basseterre border, where she cheered on and encouraged the students. “Remember it’s not about winning, but about sportsmanship and comradery,” she said, wishing the students much success and reminding them that the most important aspect of the race was “Friendship.”

Minister Jacobs was invited to officially open the race by firing the shot as the “go” signal for the students to begin their journey. After the race, both schools met at Sandy Ground Culture Centre, where speeches were delivered by race coordinator Catherine Bandou of Aline Hanson School and by Juliana Hodge-Shipley on behalf of MAC school Principal Tessa Davis-Marsha.

Both speakers congratulated the organisers of the event, including Marcellia Henry, both principals and most of all the students who participated in the race. At the Culture Centre, as a token of appreciation, gifts were given to the students of both schools as a symbol of continued friendship and unity. Trophies also were given to the captains of both schools to display at their respective schools.