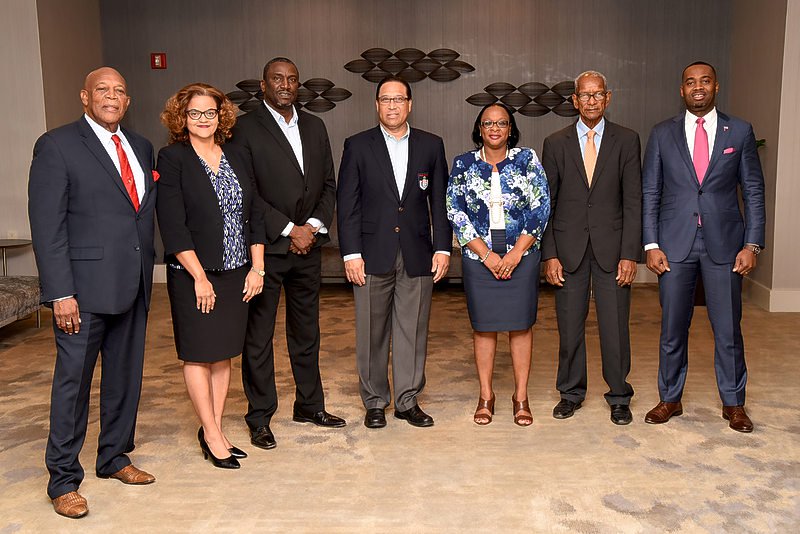 Heads of Government from the Caribbean British Overseas Territories at the meeting.

ANGUILLA–Chief Minister Victor Banks and his team returned here on Monday after attending a special meeting of the Caribbean British Overseas Territories in Miami, Florida, on October 28.

The elected Heads of Government of Anguilla, Bermuda, the British Virgin Islands, the Cayman Islands, Montserrat and the Turks and Caicos Islands held a positive and constructive meeting. Discussions focused on disaster response, recovery, building resilience, preparedness and mitigation with respect to the unprecedented hurricane season of 2017.  Each affected Overseas Territory provided updates on the current status of their respective recovery efforts and highlighted some of the lessons learned from their experiences.

The Heads expressed thanks for the humanitarian, law enforcement and military assistance provided by Her Majesty’s Government in the immediate aftermath of Hurricanes Irma and Maria. Visits to Anguilla and the British Virgin Islands by the Foreign Secretary and Secretary of State for International Development and the ministerial visit to the Turks and Caicos Islands were welcomed.

The group also welcomed the statement by Prime Minister Theresa May confirming the UK’s commitment to fulfil its obligation to support the recovery and re-development of the British Overseas Territories in the Caribbean that were devastated. The Territories committed to support each other through regional disaster management cooperation and assistance in response to the growing effects of climate change. They also committed to sharing information, expertise and best practices as it relates to mitigation strategies, including physical planning, communications, building codes and enforcement.

The Heads recognised the need for strong economic support from the UK to serve the long-term interest of both the UK and the Overseas Territories. They confirmed that the upcoming Joint Ministerial Council (JMC) will include a strong focus on the critical issues of recovery, reconstruction and redevelopment, resilience building, preparedness and mitigation. The group has called for a change in the JMC agenda to allow total participation of all the Territories in the discussion. The proposed agenda called for separate meetings with the affected Territories of Anguilla, the British Virgin Islands and the Turks and Caicos Islands. The Heads also wrote to the Prime Minister requesting a meeting with her to discuss their position with regard to their future development.

While in Miami, Banks was also involved in a series of other meetings. On Friday, October 27, the Chief Minister and the delegation met with Gencom Ltd, and discussed tourism-related projects. Following the special meeting the Chief Minister and his local team met with Godwin Carty, President of the Florida Chapter of Anguilla Progressive Association of New York (APANY); Leonard Richardson, President of the Baltimore Chapter of APANY; Maxine Herbert Duggins, Proprietor of Best Buy Supermarkets and the main Coordinator of the Hurricane Relief Effort in the USA and Blondel Cluff, Anguilla UK/European Union (EU) Representative to discuss their respective relief efforts. On Sunday, October 29, a Town Hall meeting was held with the Anguilla Diaspora in Florida at which Chief Minister Banks updated the community on the progress to recovery, reconstruction and resilience building.