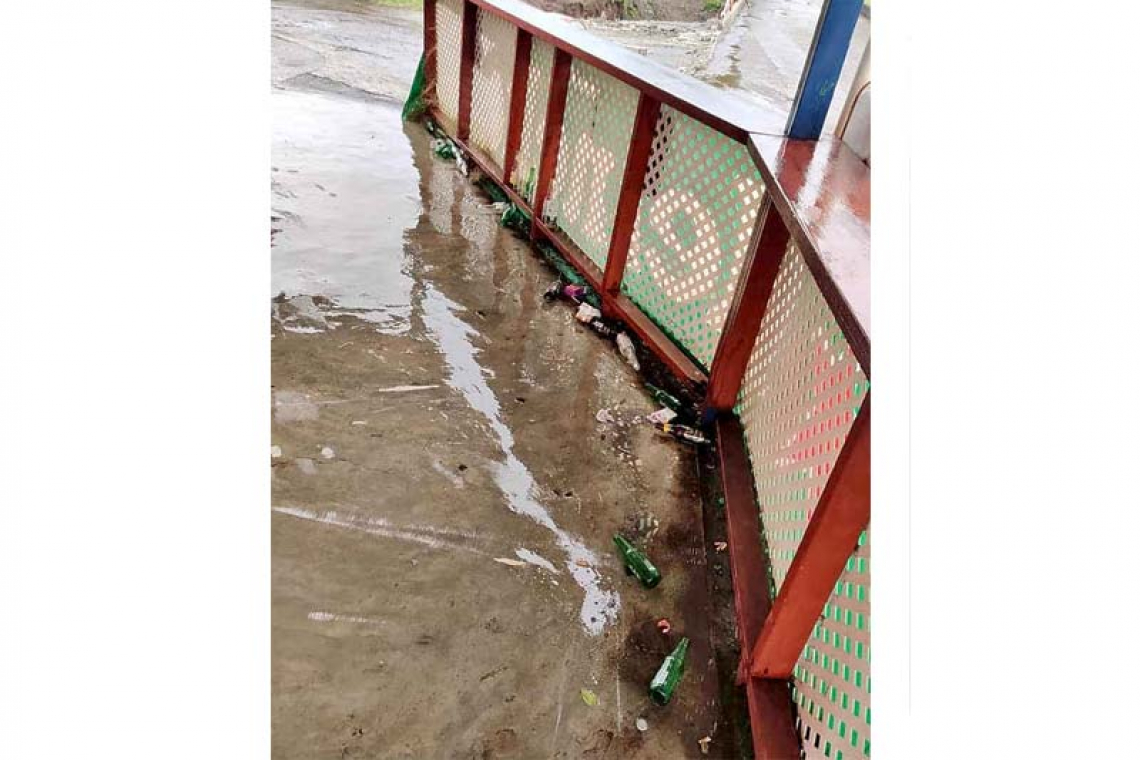 Some of the garbage and debris that the business owner and her significant other discovered.

ST. EUSTATIUS–Frustrations over the constant littering at Yummy Tummy Bar and Restaurant has led to the partner of the restaurant’s owner throwing bottles left at the business onto a street that is undergoing construction works over the weekend sparking uproar in sections of the community over his actions.

The street is currently blocked to traffic and pedestrians. A photo of the incident was circulating in the community.

In explaining their frustration, Yummy Tummy Owner Iris Liu said since April of this year the business has been having issues with persons, including workers of the road projects next to the establishment hanging out at the establishment and leaving their trash behind. The trash sometimes included items purchased at the establishment. “These guys hang out there even when the supermarket is closed.”

Yummy Tummy has been closed since April 1. During this time, the business owner said she has ensured that the premises and surroundings were clean including the front part of the shop and restaurant, the parking lot and around the building.

During their six-month closure, the owner said management and employees have spoken to the persons who hang out at their premises on numerous occasions about removing their trash. The men were told that while it is not an issue if they want to hang out on the porch of the restaurant to get shade from the hot sun during their breaks, before they leave the premises they should walk a couple steps to throw the garbage in a bin in front of the supermarket.

Liu's partner, S.K. sent several messages to the supervisor of the road project to address the issue, who promised to handle this, but the business owner saw any results.

On August 27, the Yummy Tummy owner had a meeting with government representatives to get informed and discuss the ongoing project and what it meant for their business moving forward. During this meeting, the owner also brought this issue to their attention, but to no avail. For six months, the owner has been cleaning the area of garbage, and after the heavy rainfall that occurred last week, the porch of the restaurant was in a deplorable condition due to all the garbage left on the premises.

That was the moment that emotions and frustration led to S.K. throwing bottles off his property onto the adjacent road which is blocked off. “We have tried all the “normal” ways and no one is solving the issue, so S.K. thought he would solve it by putting the mess back to where the owner of the trash works. Please note that the trash was not thrown into the open street where it could cause a danger or hazard to the general public,” Liu said.

According to Liu, based on feedback from the community, they realised that they are not the only business owners who are experiencing these issues with trash being dumped or left on their property. She said she hopes that a solution will soon come for all involved with regards to illegal dumping.

The business owner and her partner apologized for reacting to their frustrations by throwing bottles they found at their establishment onto the street project. “We have absolutely no excuse to defend the rebellious reaction of S.K., and we would definitely not encourage any of you to handle a similar situation in the same manner. For sure, he realises his error and has learnt his lesson to not let his emotions get the best of him,” Liu said.

The manager of the construction company that is currently overseeing the Road to Jeems project M.M. said some of the project workers did throw items at the location last week, but the workers had cleaned up the items.

The manager said also that some of their workers had thrown stuff at the restaurant’s location, but he noted that the garbage and debris are not all from their workers alone as other persons also hang out at the location.

In an invited comment, Chief of Basic Police Care St. Eustatius, Robelto Hodge said the owner of the property never called the police. The individual who saw K. throwing the bottle is who called the police. “I would like to note that what the gentlemen did initially was good. Instead of immediately calling the police, he first tried to resolve the situation himself by first speaking to the persons leaving their garbage behind,” Hodge said. When that did not help, he spoke to the Project Manager and when that did not yield the desired results, he spoke to the unit manager of the OLE (Public Entity St. Eustatius). It is not always necessary to call the police for every minor conflict and it showed goodwill on his part to try and resolve the matter with the persons involved,” Hodge noted. “When he took matters into his own hands and threw the garbage in the road where the road project was being executed was not the best decision on his part.”