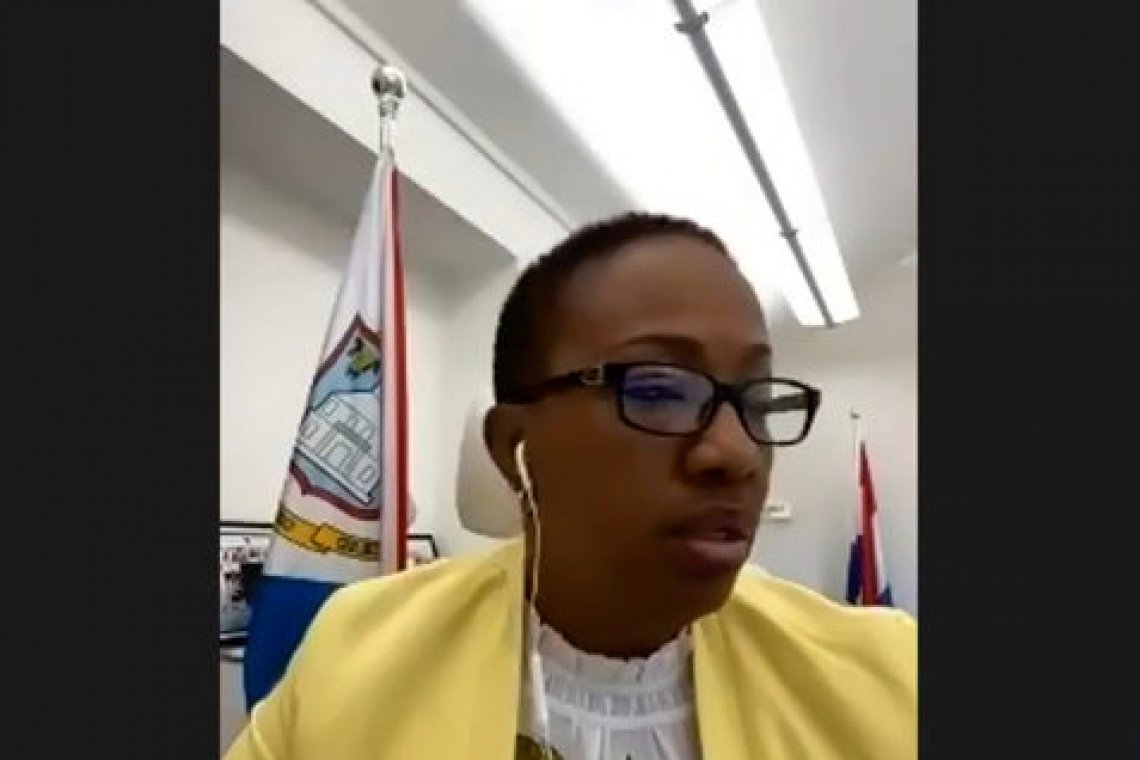 ~ 7 projects under implementation since established ~

PHILIPSBURG–A total of seven Trust Fund projects have been under implementation since its establishment and the Steering Committee has approved funding for the preparation of eight additional projects.

Prime Minister Silveria Jacobs provided an overview of the projects during an urgent virtual session of Parliament on Friday.

The National Recovery Program Bureau (NRPB) came in for some serious criticism from Members of Parliament (MPs) during the meeting with MPs calling it a failure, and useless (see related story).

Jacobs said the total amount of funding allocated by the Trust Fund Steering Committee is US $399.24 million of which $238.9 million is for projects under implementation and $139.2 million is for those under preparation. In total, the Netherlands has committed a maximum amount of 470 million euros to the Trust Fund, of which $305 million has already been transferred to the World Bank.

Taking into consideration the changing exchange rates and account cost, at the expense of the World Bank, and the investment income that is being generated by the Trust Fund, an amount of more than $120 million is still available for allocation by the Steering Committee to future projects.

NRPB, which opened in early 2019 based on a temporary national ordinance approved unanimously by Parliament in September 2018, acts as a project implementation unit for most of the Trust Fund projects in St. Maarten.

Jacobs said NRPB does not decide which projects are financed and does not replace the responsibilities of individual Ministers and Ministries. It is a technical agency that prepares and implements projects together with the Ministries and the other relevant implementation partners and stakeholders.

The digital government transformation project is expected to have an estimated budget of $12 million and aims to enhance access, efficiency, and resilience of selected administrative public services for citizens and businesses. The project is being prepared by the Ministry of General Affairs together with the NRPB and the grant agreement is expected to be signed later this year, Jacobs noted in her opening remarks to MPs.

The connectivity and resilience improvement project has an estimated budget of $20 million and aims to improve connectivity in the project area between the western and eastern parts of St. Maarten and enhance resilience and safety in the road sector. It includes the construction of Link 6 and is prepared by the NRPB together with the Ministries of Minister of Public Housing, Spatial Planning, Environment and Infrastructure VROMI, Tourism, Economic Affairs, Transport and Telecommunication (TEATT) and Justice.

The fostering resilient learning project will have a maximum budget of $30 million and is aimed at restoring access to inclusive education, learning and cultural services and improving the resilience of St Maarten’s education system. It is expected to finance at least two new school buildings and a new library and is prepared by the Ministry of Education, Culture, Youth and Sport (ECYS) with support of the NRPB.

The civil society partnership facility is prepared by VNGI International with support of the NRPB. It will have an envelope of $7.2 million to improve civil society organisations’ capacity to support reconstruction and resilience activities. The project is in the final stages of preparation and will “hopefully” go into implementation later this year.

The child protection and development project is prepared by UNICEF Netherlands together with the ECYS Ministry and has a budget of $5 million. It will focus on strengthening the capacity of school communities to respond to physical damage and emotional impacts, as well as addressing child protection needs caused by natural disasters. It is in the final stages of preparation and the signing of the grant agreement is expected in the next few months.

The two Development Policy Operations (DPO) projects each of $15 million are being prepared by the government of St. Maarten with support of NRPB. Both aim to support a comprehensive plan for St. Maarten’s sustainable and resilient financial future. The DPOs will support improved public financial management, tax reform, public sector transparency, resilience measures and improved social insurance.

A set of policy actions needs to be completed by government before the DPOs can become operational. Jacobs said this is a priority of government to finalise soon.

The Emergency Recovery Project 1 has an envelope of $55.2. million for five years and started in July 2018. The objective is to contribute to St Maarten’s immediate emergency recovery needs and to strengthen institutional capacity to manage recovery and reconstruction through the establishment of the NRPB. The project supports all Ministries, GEBE and the St Maarten Housing Development Foundation.

Priority activities under this project include support to emergency services (fire department, police, and ambulance department), repair of public buildings where repairs are not financed by insurance pay-outs to government, as well as a social and private home repair programme.

Jacobs said the project has successfully completed repairs to more than 300 social apartment units and private homes to date, completed a large portion of the necessary repairs and upgrades to the police stations, concluded the repairs to the Meteorological Services Radiosonde Building, and provided emergency and communication equipment for the Fire Department, among the many activities under this project.

EISTP is implemented together with St. Maarten Training Foundation (SMTF) and has provided income support, job training, health insurance and transportation allowances to more than 1,800 beneficiaries over the past two years. The project will finance the development of a social registry system within the Ministry of Health, Labour and Social Affairs VSA. The available envelope for this project is $22.5 million, of which over 85 per cent has been disbursed.

She said a request had been submitted for an extension of the training programme with SMTF beyond the current closing date of September 2020, but was not approved by the Steering Committee.

The Emergency Debris Management Project has an envelope of $25 million for an initial three years. It started in February 2019 with the objective to manage debris from hurricane and reconstruction activities. Priority activities include the removal of car wrecks, fire suppression on the landfill, the removal of shipwrecks from Simpson Bay Lagoon and improved vector control.

Initial results include the procurement of alternative daily cover material and supply equipment, which has helped to suppress surface fires on the landfill, as well as the delivery of heavy equipment for the daily management of the landfill by the Ministry VROMI, including a bulldozer and a front-loader that is presently being shipped to St Maarten.

The Airport Terminal Reconstruction Project is financed by insurance proceeds, a loan from the European Investment Bank of $50 million and a grant from the Trust Fund of $72 million, which is on-lend by the government of St. Maarten to Princess Juliana International Airport (PJIA). The objective is to restore PJIA’s passenger capacity to pre-Hurricane Irma levels, with improved resilience to hurricanes. This project will be implemented by the PJIA operating company PJIAE together with NRPB.

The Enterprise Support Project has an envelope of $35 million and will be available for the next four years. The objective is to support the recovery of micro, small and medium-size enterprises through direct financial assistance. The project became effective a month ago and the project team just started working on implementation. More information on this project will become available in the coming months.

As it relates to the Hospital Resiliency and Preparedness Project, the Trust Fund provided a grant of $25 million to St. Maarten Medical Center (SMMC) for the strengthening of the existing building and the co-financing of the new hospital facility.

The Red Cross Roof Repair Project under implementation by Red Cross Netherlands is to continue the existing Red Cross roof repair programme, to the tune of $3.6 million.

Jacobs explained that the Trust Fund was established in April 2018 through an administrative arrangement between the government of the Netherlands and the World Bank. Projects that are financed by the St. Maarten Trust Fund are approved by the Council of Ministers and proposed to the Trust Fund Steering Committee.

All decisions of the Steering Committee, including decisions on the approval of new projects, require full consensus among the three members. No project is financed without the agreement of all three parties.

The NRRP was approved unanimously by Parliament in September 2018 and provides recommendations to restore, secure and strengthen the well-being of the people of St Maarten between 2018 and 2025.

Jacobs said the roadmap for the recovery of St. Maarten identifies more than $2.3 billion in recovery and resilience needs, of which less than 25 per cent can be financed by the Trust Fund. Other needs have to be financed by other resources, if available.