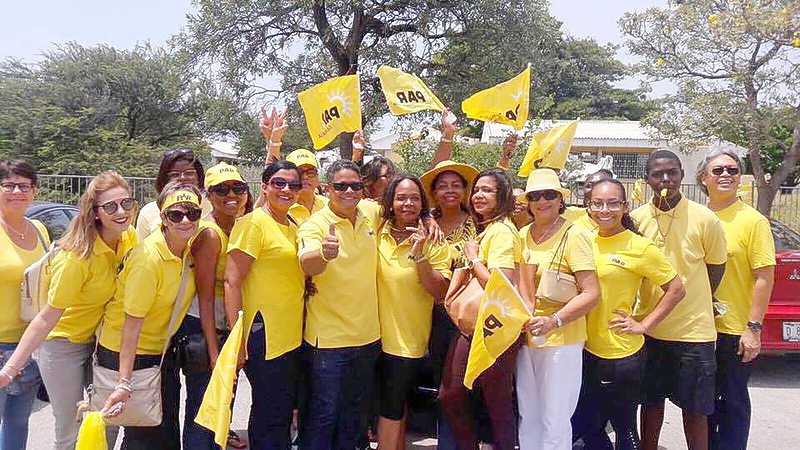 WILLEMSTAD – The Netherlands and Curaçao must become big friends again. PAR-leader Eugene Rhuggenaath, who is likely to take over as Prime Minister, wants to strengthen the relationship with The Hague, especially after the period where, what he considers anti-Dutch parties were in power; “If we do not get that chance now, then when?”

The PAR/MAN coalition for which an agreement has already been signed will try to complete a governing accord this coming weekend. Former Antillean Prime Minister Etienne Ys is to be proposed as “informateur” or even “formateur” so that the installation of a new government can take place quickly.

Rhuggenaath led the yellow party to an election victory on Friday. The MFK of Gerrit

Shotte, who was convicted of corruption last year and who preached independence during the campaign, ended as third.

MFK’s current coalition partner KdNT that lost one of its three seats won’t meet with Governor Lucille George-Wout as part of her formation consultations. Party leader Amparo dos Santos says it’s waste of time because she already has an agenda and there seems to be much haste with forming a PAR/MAN/PIN government.

Rhuggenaath: “The people have chosen for tranquillity and integrity in government. Voters were tired of everything that was taking place in politics. They simply wanted a government that serves and functions. It is time to invest in a new relationship with the Netherlands.”

In his view, that never happened after the Netherlands Antilles was dismantled in 2010. “Now we have a direct relationship, but Curaçao has never come to deepen that new collaboration.” Trade and commerce offer opportunities. “But we must also look at what we can do in health care and education.”

School dropout is one of the causes of high-level crime on the island. Curaçao is a transit country for South American drugs and the collapse of neighbouring Venezuela is still worsening.

Rhuggenaath: “In all districts on the island you hear that safety is a major concern. We need to see if we can improve the intelligence for information collection on criminal activities together.”

The 47-year-old politician, who studied in Miami and Rotterdam, also hopes to end the division among the people on the island. “We have to unite. Goals like education and safety are not reserved for one party. We must do that together. I believe in serving leadership.”

At the same time, after so much turmoil he sees there is little confidence in politics. “Maybe there are lessons to be learned from other places in the Kingdom.”

PAR is forming a government with MAN and the new party PIN. Rhuggenaath is ready to head his first cabinet.