Home The Daily Herald G20 promises to coordinate on economy 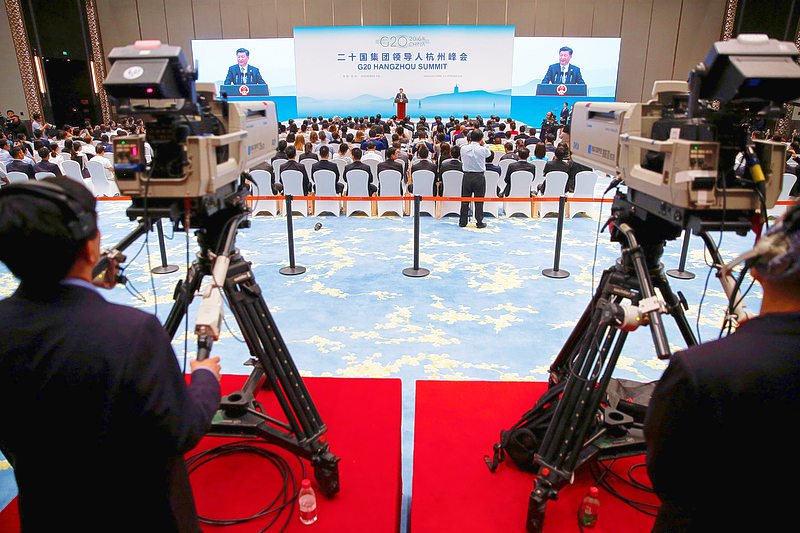 HANGZHOU, China–Leaders from the world’s top economies broadly agreed at a summit in China on Monday to coordinate macroeconomic policies, but few concrete proposals emerged to meet growing challenges to globalisation and free trade.

At the two-day gathering in the scenic Chinese city of Hangzhou, the world’s most powerful leaders also agreed to oppose protectionism, with Chinese President Xi Jinping urging major economies to drive growth through innovation, not just fiscal and monetary measures.
“We aim to revive growth engines of international trade and investment,” Xi said in a closing statement. “We will support multilateral trade mechanisms and oppose protectionism to reverse declines in global trade.”
Discussions at the meeting were distracted by North Korea test-firing three medium-range ballistic missiles in a defiant reminder of the risks to global security. North Korea has tested missiles at sensitive times in the past to draw attention to its military might. But Monday’s launch risked embarrassing its main ally Beijing, which has gone to extraordinary lengths to ensure a smooth summit meeting.
Beijing said it hoped relevant parties would avoid taking any actions that would escalate tensions. The United States called the launch reckless, while Japanese Prime Minister Shinzo Abe told U.S. President Barack Obama that it was unforgivable.
On other fronts, the United States tried but failed to finalise a deal with Russia for a ceasefire in Syria on the sidelines of the summit. Obama and Russian President Vladimir Putin had a longer-than-expected discussion about whether, and how, they could agree on a deal, a senior U.S. administration official said. But in talks earlier on Monday, U.S. Secretary of State John Kerry and Russian Foreign Minister Sergei Lavrov were unable to come to terms on a ceasefire for the second time in two weeks, although they will meet again this week.
The G20 called for the formation of a global forum to take steps to address steel excess capacity and encourage adjustments, the White House said in a statement, one of the controversial issues discussed at the summit. China produces half the world’s annual output of 1.6 billion tonnes of steel and has struggled to decrease its estimated 300 million tonne overcapacity, and rising prices have given companies there an incentive to boost production for export.
With the summit taking place after Britain’s vote in June to exit the European Union and before the U.S. presidential election in November, G20 leaders had been expected to mount a defence of free trade and globalisation and warn against isolationism. Republican presidential candidate Donald Trump, who supports protectionist trade policies, has pulled into an effective tie with Democratic rival Hillary Clinton, erasing a substantial deficit.
In Germany, Chancellor Angela Merkel’s party was relegated to third place behind an anti-immigrant party in a regional election on Sunday. “I’m very unsatisfied with the outcome of the election,” Merkel told reporters in Hangzhou. “Obviously it has something to do with the refugee question. But I nevertheless believe the decisions made were right and we have to continue to work on them.”
One of the few areas where there was progress was in protecting the environment. China and the United States ratified the Paris agreement on cutting climate-warming emissions on the eve of the G20 summit, setting the stage for other countries to follow suit.
In a communique issued several hours after the close of the summit, the G20 leaders warned that global growth was weaker than anticipated, with downside risks continuing, and repeated the acknowledgement that monetary policy alone could not create balanced growth. It said new challenges including terrorism and immigration complicated the global economic outlook, and that the G20 agreed use all policy tools available to drive strong and sustainable growth.
British Prime Minister Theresa May, attending her first G20 summit, said governments needed to “do more to ensure that working people really benefit from the opportunities created by free trade. This discussion goes to the heart of how we build an economy that works for everyone.”