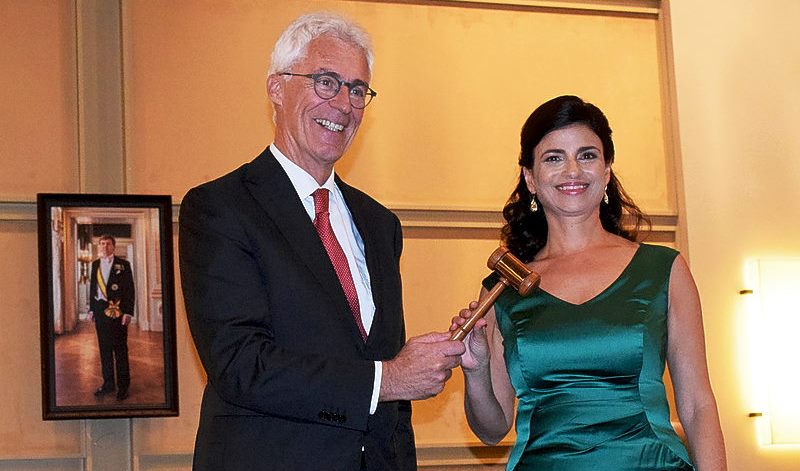 WILLEMSTAD–New President of the Joint Court of Justice of Aruba, Curaçao and St. Maarten, and of Bonaire, St. Eustatius and Saba Eunice Salah received the gavel from outgoing President Evert Jan van der Poel during Friday’s extraordinary sitting of the Court at Santa Barbara Resort.

At the same time as the Joint Court bade farewell to Van der Poel, who has been presiding over the Court since 2013, Saleh (37) was officially installed as his successor.

Not being the youngest, neither the first local, nor the first woman President, Saleh is nevertheless the first daughter of a former Joint Court President to tread in her father’s footsteps.

Jaime Saleh held this position for 10 years between 1979 and 1989. Since then a lot has changed, his daughter said in her acceptance speech. She pointed at the increased complexity of cases, as well as the fact that nowadays the Court is more allowed to express Antillean or Caribbean influences.

She said that former Presidents Lisbeth Hoefdraad and Van der Poel both served as “building masters” of the new Court. “I see my role as that of an interior designer. I shall continue furnishing work for the House of Justice, for all my colleagues and litigants,” Saleh said in looking forward to a good cooperation with the Board, the Supervisory Council and all her colleagues.

Implementation of a new case-registration programme, website renovation, publication of rulings and a pilot with digital litigations were mentioned by Saleh as some of the targets for 2017.

Many high-ranking government officials from all corners of the kingdom were present at the ceremony. The highest courts of the kingdom were represented by Vice-President of the Council of State Piet-Hein Donner and by Attorney General of the High Court of the Netherlands Jos Silvis. President of the Caribbean Court of Justice Dennis Byron was also present, as well as Justices Jacob “Bob” Wit and Adrian Saunders.

In his farewell address, Van der Poel said he considered his mission accomplished. In introducing his successor, he said that Saleh was no novice when it comes to the administration of law.

“From the autonomy of this Joint Court in 2010 she has been a member of the Board and for many years the substitute President. She has been at the basis of the founding of this organization and has gone through all the phases of changes this Joint Court underwent. There could not have been a better possible time of preparation for her new function,” he said.

He also referred to the new President’s own statements: “It’s now my time and I am ready for it,” but also: “I fancy this new job.”

Her predecessor called Saleh a “strong woman, who stands tall in this community and also enjoys the good things in life.”

Since then she is a Judge at the Joint Court and since 2009 she was appointed Joint Court Vice-President in Curaçao and Bonaire.

Van der Poel said that during the past years Saleh had shown strong interest in the Joint Court organization. “She has a good track record and has the support of the organization,” he said.

In looking back on his years as Joint Court President, Van der Poel said the Joint Court is now financially sound and capable to meet the demands.

“Training for Judges and employees received new impetus through the collaboration with the Training Institute for the Judiciary in the Netherlands. ‘Caribbeanizing’ has gradually gained more interest and contents. The orientation in the region is part of it. The ties with the Council of State, the High Court and the Courts of Appeals in the Netherlands, our highest Judges in the different Dutch jurisdictions, have been strengthened and the Joint Court experiences a lot of support and substantive feedback from this mutual cooperation,” he said.

After 15 years, having been leading two courts,– a Court of Appeals in the Netherlands and the Joint Court in succession –, Van der Poel decided to again occupy himself exclusively with the administration of justice. “This gives a lot of satisfaction because it is a profession that offers inconceivable satisfaction.”

January 26, 2021
0
Franklin Carty waiting to be treated in hospital.   MARIGOT--A Sandy Ground man has said he was tasered three times by Gendarmes during an incident that took place in Sandy Ground on January 21, and accuses Gendarmes of using excessive force. ...
Read more

Council of Ministers cancels both Carnival and Regatta | THE DAILY HERALD