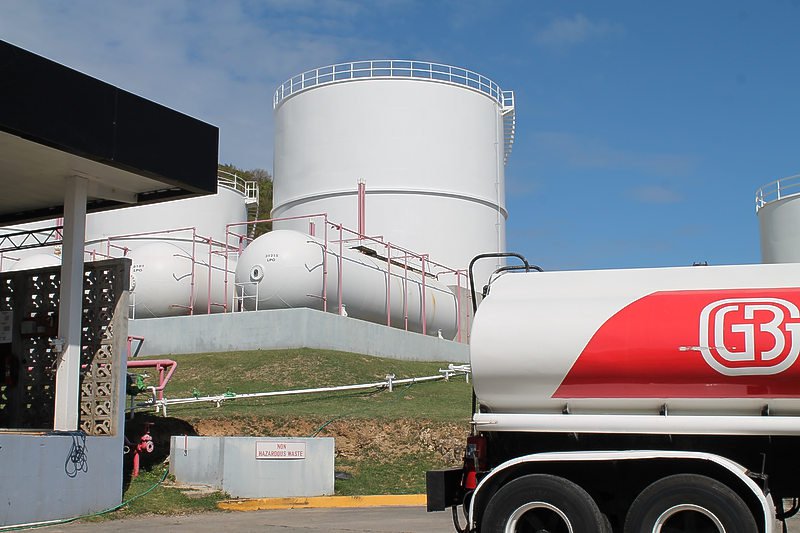 PHILIPSBURG—GB Energy has disclosed it has completed construction of an additional jet fuel storage tank at its terminal in Cay Bay, doubling its capacity from 17,000 barrels (a barrel equals 42 gallons) to 34,000 barrels, marking a total investment to date by the company of around US $3 million dollars.

Planned a year ago, and completed less than a month ago, the approximately US $1-million storage tank is already in use.

“We not only see a growth in our presence here, but we also wanted to make sure we have reliability and continuity of jet fuel supply for the country,” said GB Chief Operating Officer in St. Maarten Bela Szabo. “With tourism as the main driver of the economy, we see St. Maarten’s potential for economic growth continuing, and this is a firm sign of our commitment to its growth.”

Regional External Affairs Director Walkiria Caamaño pointed out that historically St. Maarten had shortages of aviation fuel in the past.

“That was a key reason in motivating our decision to make sure St. Maarten had sufficient fuel in high season and throughout the year,” she said.

For inventory management control, a state-of-the-art radar system measures fuel levels and conditions in the tank. It can also be monitored from a remote location.

“The tank has a 50-year-plus lifespan, but every 10 years you open it up and do an inspection of the structure to extend the lifespan by another 10,” explained Szabo. “Fifty years is the minimum, but some tanks can operate for 80 years following repairs and as long as they are still in good condition.

“It was a big project and we would like to publicly thank the authorities here for their cooperation. We had to bring in equipment and specialised people from abroad for the inspections. We had zero incidents, zero accidents and zero fatalities. It all went according to plan.”

The automated fire prevention system has also been upgraded with repairs to the water tank that can pump 1,000 gallons per minute. Security is assured with 24-hour video surveillance monitoring of the terminal on site and remotely from the Dominican Republic.

GB Energy, the fuels division of GB Group, entered the market in St. Maarten in November 2012 after taking over the assets of Texaco. The company supplies eight airports in the Caribbean with aviation fuel: Punta Cana, Catey, Santiago de Caballeros in the Dominican Republic, where the company is the exclusive supplier, Montego Bay and Kingston in Jamaica, and Anguilla, Sint Eustatius and St. Maarten.

The retail arm of the company has more than 200 service stations in the region, and just recently upgrades were completed at the gas station in Cole Bay and Cul-de-Sac (Grand Marché roundabout) for the new Texaco 2020 image.

“We’ve had very good feedback from customers. They like the clean, well-maintained stations with new lighting,” Szabo noted.

The company not only supplies gasoline and aviation fuel, but also ultra-low sulphur diesel, liquid petroleum gas (LPG), popular known as cooking gas, fuel for electricity companies, and is the exclusive distributer for Chevron lubricants. A new LPG truck conforming to the highest standards of safety has also been acquired.

For its combined operations, GB Energy has more than 2,000 employees, direct and indirect, in the three countries. It moves 380 million gallons of fuel per year in the region, a figure that Szabo is very comfortable with.

“We look forward to increasing the number of gallons on a yearly basis,” he said.

The commercial and industrial sector has 250 customers, and four terminals to receive and distribute to users.

“We are the largest supplier in the Caribbean, delivering more than 140 million gallons of Jet A1 fuel per year; that’s 400,000 gallons per day, during 180 daily operations, serving more than150 customers,” Jimenez discloses. “We also do bulk deliveries to Anguilla and Sint Eustatius. We have about 100 employees in the region and a fleet of 100 trucks, including hydrant servicers and refueller tankers.”

GB Energy is partners with the International Air Transport Association (IATA) and an associate member of Joint Inspection Group (JIG).

“Regarding the Technical Service Agreement (TSA) Shell Aviation looks into our operations in the region. We use their manuals, which are the JIG manuals, and they audit our operations every year,” Jimenez explained. “I’m pleased to say we have a very good track record on our site audits.”

Jimenez indicated that air traffic grew by five per cent over the past five years in St. Maarten, but aviation fuel demand grew by only three per cent.

“That’s because of the introduction of more modern, fuel-efficient aircraft,” he explained. “An aircraft that previously used 18,000 gallons of fuel for a transatlantic flight from Europe, now carries more passengers and uses three to four thousand gallons less than it used to use. Obviously the big carriers like Boeing and Airbus are pretty pleased about that.”

But with expansion plans of Princess Juliana Airport SXM reportedly to include more arrival gates, a lengthened runway, and a future terminal for private jets, demand for aviation fuel should remain constant at least, if not increased exponentially.

According to Jimenez, St. Maarten has the second largest private jet (GA) market in the Caribbean.

“Even though because of its size, St. Maarten is number two, I can assure you in terms of its impact, it is number one,” he states.

It’s another reason why Szabo has faith in the economic growth of St. Maarten, determining GB Energy’s wish to continue investing in St. Maarten. Moving forward, the company plans to invest US $4 million within the next 24 months.

“New projects that we are planning are a sign of the confidence we have in the economy. It will show the people and the government that we are committed to St. Maarten,” he concluded.