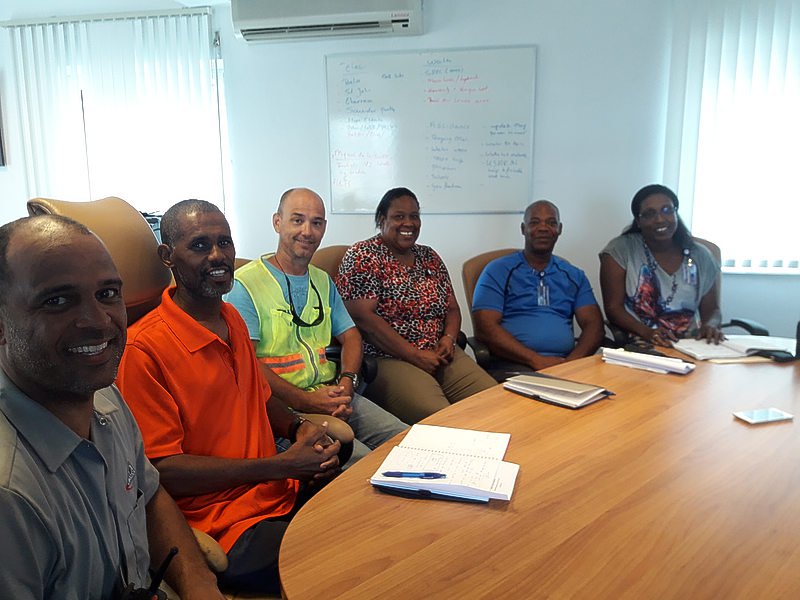 PHILIPSBURG–Utilities company GEBE is hoping to fully restore electricity and water to its clients in St. Maarten within a month’s time, barring unforeseen circumstances, GEBE Distribution Manager Tony Brooks told reporters at a press conference held at the company’s Management Building on Thursday.

Since the passage of Hurricane Irma on Wednesday, September 6, GEBE workers have been working arduously and have restored electricity to an estimated 20 per cent of the community thus far. With the extent of the damage sustained across the country and the places that are no longer operational or operating at partial capacity, GEBE anticipates that it will be operating at full capacity when it reaches 60 per cent of its capacity prior to the passage of Hurricane Irma.
Regarding areas that are underground, but not yet powered up, GEBE Chief Executive Officer Kenrick Chittick said it could be that power has not yet been restored to these areas because transformer houses or connection boxes were damaged or there were other issues. In these cases, GEBE will have to isolate the system to leave out areas where the damage is and restore the areas that are intact.
“That is our main focus, because we want to have life back to normal as soon as possible,” Chittick said.
Pockets of areas in just about every district in the country have power to a certain extent, with the exception of Dutch Quarter and Middle Region where overhead cables suffered extensive damage. GEBE is working daily to restore more areas.

Damage
Certain parts of GEBE sustained significant damage during the passage of Hurricane Irma. All five buildings at the power plant suffered damage. Buildings 2 and 3 were the most severely damaged. Buildings 4 and 5 were also damaged, with one building losing half of its roof and another a quarter of its roof.
The roof of building 4 has since been covered and that of building 5 was expected to be covered yesterday, Thursday, or today, Friday. When this is done, the generators in this building will be put back into operation.
“What we were trying to do after the hurricane is to go through all districts to make sure that transformer houses and our connection boxes are intact and we have to look at our house connections so that when we restore power, we don’t cause injuries or other damage, so that took us some time as well,” Chittick said.
As for water, seven of the company’s water tanks were damaged: the roof was blown out from four of them and the damage to three was so severe that they have to be either replaced or repaired. The three water plants suffered no damage and are still intact: Cupecoy, Cay Bay and Pointe Blanche. GEBE can therefore produce sufficient water to meet the demands in the country.

Engines
According to Chittick, the engines did not suffer any damage during the hurricane. “Some water got into the buildings due to loss of the roofs. We are busy checking all the engines. I know we had four engines operational prior to Hurricane Maria. For the others, the roof was exposed so we did not put them into operation as yet, but we are busy testing one today [Thursday – Ed.] to see if it can come online on Thursday or Friday.”
Chittick said the company has sufficient power and sufficient fuel to put areas online. “Our tanks were filled before the hurricane and we haven’t produced much since then, and we tank up our fuel tanks daily from our supplier.”

Water
Chittick said GEBE is working on having water in as many areas as possible. The water can be used for drinking only if boiled. It can be used directly for cleaning, flushing toilets and bathing.
“So all customers: please boil water first before drinking it,” Chittick said. “We test the water as well and normal procedures (are being followed) and because we know the tanks are open we are emphasising to not drink the water directly from the pipe, but to boil the water first.
“We also had a number of water trucks delivering water throughout the entire (country) as much as possible. We know that everyone didn’t get water, but we did our best to supply as much as we can. So those who didn’t get water from us in the water trucks, we apologise.
“What we are doing now is trying to restore water to all districts. There were some districts where we had a tap (open) and persons can go and fill water in buckets or bottles to use for their personal uses at home. This is to bring water as close as possible to our customers.”
Due to the passage of Hurricane Irma, a number of homes and hotels were damaged. This means that consumption is expected to drop considerably.
“For example, if we were producing 16 tons of water per day, with Irma it can hover around eight to nine tons per day,” reporters were told.

Country-wide outage
GEBE suffered a setback in its restoration process during the passage of Hurricane Maria on Wednesday when water ended up in the high voltage system resulting in a short circuit at the power plant. This resulted in an almost-country-wide power outage on Wednesday when all areas were out of power except a few areas that were powered via back-site units, such as Porto Cupecoy, where the water plant was fully operational.
Before restoring the high voltage system, GEBE had to ensure that certain areas, including about 12 to 14 cubicles, were properly cleaned and dried, which is a time-consuming process.
“This took some time, but we managed until the evening hours up to 12:00am to restore power to as many areas as possible.”