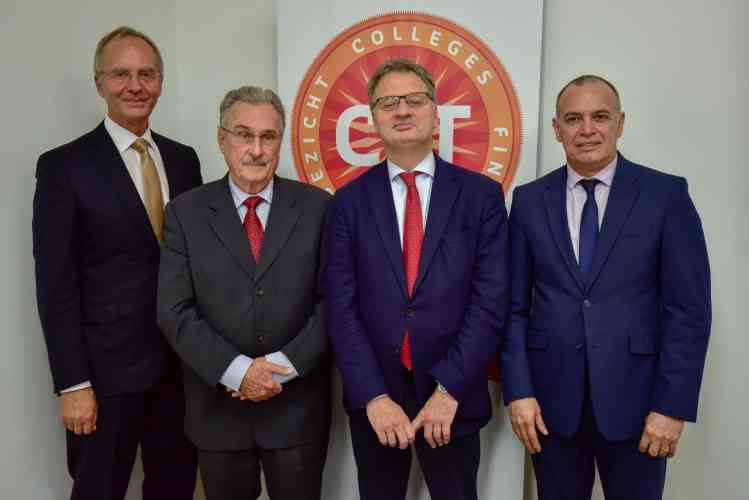 THE HAGUE–The troubled financial situation of St. Maarten’s utilities company GEBE, the harbour and the airport are named as risk factors in the 2019 draft budget of the Country St. Maarten. The Committee for Financial Supervision CFT is worried, but it is also critical of the general state of government’s finances, the financial management and the increasing expenditures and capital investments in hard times.

The concerns are stated in a letter to St. Maarten Minister of Finance Perry Geerlings, dated October 18 and published on the CFT website last week Friday, in which the CFT gave its advice regarding the 2019 draft budget which shows a deficit of NAf. 88.4 million.

In the accompanying explanation to the budget proposal, the St. Maarten government stated that there were “financial risks” involving several government-owned companies. “It is stated that according to a recent report of the World Bank, GEBE will be insolvent early 2019 and that the government cannot exclude that it will have to financially contribute to a solution.”

The CFT did not go into details on these financial risks, but it questioned government’s intention to put the concession payments from GEBE and the harbour of NAf. 5 million each in the 2019 budget as a source of revenue.

The CFT asked the government to provide further information about the financial risks of the government-owned companies in question, and to indicate what measures are taken to mitigate the risks.

To the CFT’s surprise, the management cost of the waste disposal site, commonly referred to as the dump, was lowered in the 2019 draft budget compared to the 2018 budget. “The CFT had expected an increase of the cost considering the problems with the current dump and the decision of the court. The CFT asks St. Maarten to bring the calculation in line with the actual need,” CFT Chairman Age Bakker stated in the nine-page letter.

The CFT was critical of a number of planned investments mentioned on the capital account. The planned investments include phase 2 of the Sanitary Landfill Solid Waste Treatment Plant for NAf. 18 million, improvement trajectory at the Tax Office and government’s financial administration for NAf. 14.1 million, the new housing for the St. Maarten Parliament for NAf. 10 million, a new building for the Meteorological Service for NAf. 8 million, the repairing and improvement of several sports complexes for NAf. 7.4 million and study financing for NAf. 5.3 million.

The total capital investments in the draft 2019 budget amount to NAf. 97.4 million, of which NAf. 95.5 million is to be funded through loans the St. Maarten government plans to secure via the Netherlands. The CFT observed that this means that St. Maarten has to take big loans to finance these capital investments and warned about acquiring too much debt.

“This while St. Maarten sees itself forced to also take loans in 2019 and 2020 for liquidity support. The CFT is advising the government to go easy on capital investments and to finance these as much as possible through the Reconstruction Trust Fund. It is important to prioritise and rank the planned investments.”

The CFT remarked that no insight was given in the motivation to invest NAf. 10 million for a new Parliament building, while the impact of this investment as well as the possible double cost due to current rental obligations is lacking in the draft budget. The CFT advised the government to adapt the capital investments downward.

The CFT considered it “undesirable” to mix capital investments allotted in the budget with projects that can be financed entirely or partially through the Reconstruction Trust Fund managed by the World Bank with Dutch money.

One such project concerns the second phase of the Sanitary Landfill Solid Waste Treatment Plant. “Seeing that waste management has been earmarked as a priority reconstruction project, the CFT advises not to include this investment in the capital account, but to have this proceed through the Reconstruction Trust Fund.”

The draft 2019 budget contains a considerable number of policy priorities, but according to the CFT, the needed finances are lacking in the budget. The CFT observed that while the renovation, repair and expansion of the Pointe Blanche prison and the cleaning up of the waste disposal site are mentioned as policy priorities, no funds are allocated in the 2019 budget for these highly important projects.

The amount allotted for road repairs and maintenance has decreased in the 2019 budget, while the situation of the road network has deteriorated.

The cost of personnel has been budgeted at about NAf. 180 million, which is an increase compared to 2015, 2016 and 2017 when about NAf. 155 million was budgeted. The cost of personnel is supposed to decrease by NAf. 8.7 million based on the new pension legislation, which the St. Maarten Parliament still needs to approve and which increases the pensionable age from 62 to 65 years.

An increase of the cost of personnel by some 22 per cent in 2019 compared to previous years was deemed “inappropriate” considering the current budgetary financial problems. The announced 10 per cent cut in the salaries of the ministers and members of Parliament was included in the 2019 budget, but formal decision-taking still has to take place.

The 2019 draft budget shows NAf. 502 million in expenditures, which is a lot more than in previous years when the expenditures were around NAf. 455 million. The CFT noted that the revenues appeared to be budgeted too high and advised to adjust the expenditures downward.

On the revenue side, St. Maarten has budgeted NAf. 413.6 million, higher than was calculated for 2018. Government expects to receive more revenues when the local economy continues to recover next year. Government also expects higher tax compliance with a restructuring of the Tax Office. The tax revenues of NAf. 321.9 million mainly consist of wage tax (NAf. 148.1 million), turnover tax (NAf. 118.9 million) and profit tax (NAf. 24.5 million). The CFT is requesting a further analysis of the tax revenues.

The CFT expressed concerns about the large loans St. Maarten wants to secure. “The debt quota will rise to about 54 per cent of the gross domestic product if the budgeted capital investments 2018 and 2019 and the liquidity support 2018 and 2019 were to be acquired as loans.”

The debt quota will further increase to “an undesirable high level” of about 79.5 per cent if additional loans are acquired to carry out the Financial Recovery Plan drafted to improve St. Maarten’s general financial management, replace current financial systems and laws, and to train government personnel.

A temporary increase of the debt quota is justified considering the trying times after Hurricane Irma, but further consultation with the CFT is necessary about the liquidity support, the size of the capital investments and the debt quota. The CFT finds it important to secure sustainable government finances.

The CFT concluded that the 2019 draft budget in many parts did not comply with the Financial Kingdom Law. St. Maarten is facing great challenges where it pertains government finances.

“The CFT is of the opinion that the financial and economic situation after the hurricanes brings many insecurities. Also, the annual accounts of 2016 and 2017 are lacking, as is information

about the government-owned entities, and the quality of financial management is bad. Drafting a budget in these circumstances is therefore a great challenge.”