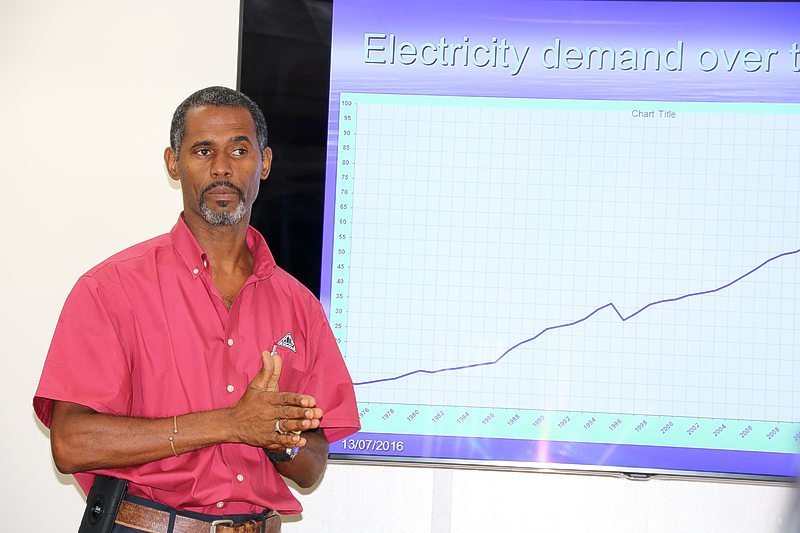 PHILIPSBURG–Utilities company GEBE says power has been restored in all districts and hopes that there will be no more mechanical issues with GEBE generators, the Supervisory Board announced during a press conference Wednesday morning.

Board Chairman Roy Marlin thanked the public for their patience during these past days with several outages.

Three engines started to malfunction on Friday while two others were being overhauled.

Cay Bay power plant Manager Kenrick Chittick gave a lengthy presentation about the number of generators GEBE has and the challenges it has faced over the year. He said decisions had to have been made by the previous Supervisory Board and management to order a new generator, but this had never been done and therefore affected the power plant’s operation.

“There are six engines that are currently down, all of which are old and outlived their lives. Those engines have to be repaired, but that is also a challenge for the company because they cannot even find the parts to repair those engines. The fire at the power plant damaged seven engines and they ordered the parts to repair them. Engine number 12 failed and that too they had to repair,” Chittick said.

“The workers have to be commended for their hard work and speedy recovery of the repairs to some of the engines. It takes about 12 hours to fix these generators, but these guys do it in six, which is a record time. We have another, older engine at the plant that is working, but we are using it as a backup when there is load-shedding.”

He said the demand for electricity in Dutch St. Maarten had grown over the years and GEBE had to produce 55 megawatts of electricity to maintain power in all the homes and businesses.

Whenever there are engine failures, the areas that will see load-shedding are St. Peters, Saunders and Middle Region, because those areas are not commercial areas. Even Philipsburg had to endure power outages because another engine failed where a piston ring had broken and had to be repaired, he said.

The company also has to play the load-shedding schedule by ear to an extent, so there are limitations to the ability to forewarn, and GEBE has resorted to posting updates on social media throughout the day, much to the annoyance of consumers hit by outages unexpectedly.

Customers who have experienced damage of appliances during the outages can go to GEBE and fill in a claim form: https://www.nvgebe.com/customers/file-a-claim.html

Persons are requested to do this 48 hours after the damage occurs. The form will be placed on the company’s website soon. For any inquiries contact GEBE at customerservice@NVGEBE.com