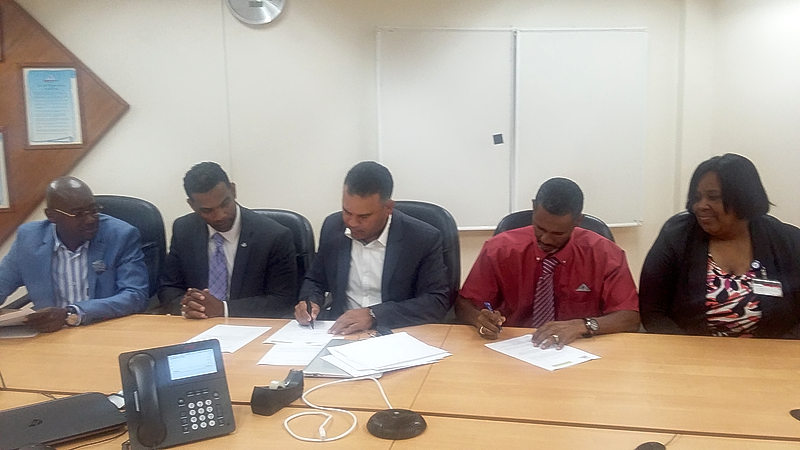 PHILIPSBURG–Utilities company GEBE on Wednesday signed a Letter of Intent (LOI) with Aruba-based company Sunshine Real Estate for the construction of solar panels that would produce two megawatts (MW) of electricity for the country as part of efforts to move towards renewable energy.

VROMI Minister Angel Meyers said the intention is to cover two parking lots on the Walter Nisbeth Road (Pondfill) and place the solar panels on their roofs. The benefits will include providing shade for the parking lot and generating electricity. “It will be a win-win situation,” Meyers said.

Interim Managing Director Kenrick Chittick said the intention is for the project to be eventually expanded so that between four to six MWs of electricity can be produced as renewable energy. In the future, the company is also looking at placing solar panels on the roof of the power plant as well as using different government parking lots on the island.
Sunshine Real Estate Director Terence Lacle thanked parties for the opportunity to do this project for St. Maarten. He said it has taken a long time and he is happy that it has reached this stage as it is important for St. Maarten to embark on renewable energy.

Meyers said he had talks with GEBE’s Supervisory Board of Directors and management about his desire to see the utilities company move to renewable energy. He said St. Maarten was the first island to express this on paper, and right now the country is lagging behind and is now playing catch up where renewable energy is concerned. He said also that the use of fossil fuel has to be phased out.

Supervisory Board Chairman Roy Marlin said Sunshine Real Estate did the solar park in St. Eustatius and the board had been impressed with the project. He is happy that the company can put its expertise to use for GEBE in St. Maarten.
Source: Daily Herald
GEBE, Sunshine Real Estate sign LOI for renewable energy project