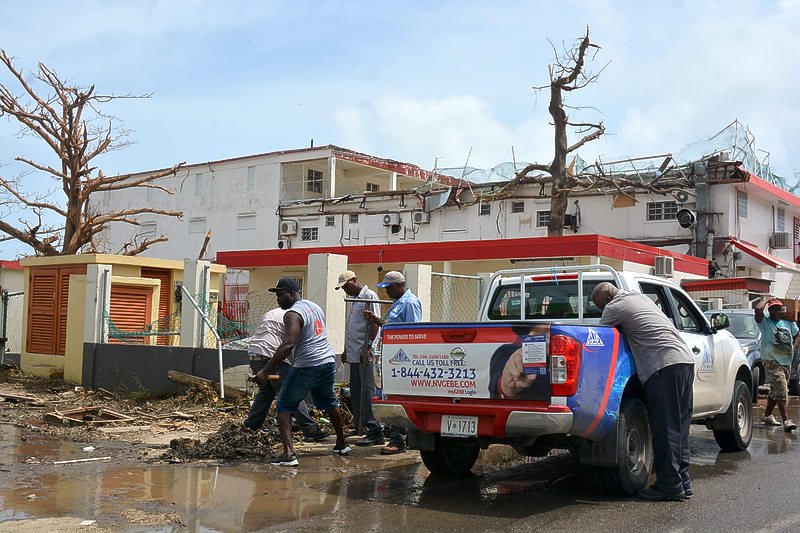 PHILIPSBURG–As it works towards repairing its water network to restore water to homes in the various districts; utilities company GEBE is considering opening water points in districts where residents can go anytime to access water rather than trucking water to the districts daily.

GEBE Public Relations Officer (PRO) Paula Gordon told The Daily Herald on Tuesday that the company is also considering opening a makeshift office in which it can serve its customers.

While there was little damage to the power plant in Cay Bay and its management office on the Walter Nisbeth Road (Pondfill), GEBE’s main office on the Walter Nisbeth Road suffered extensive damage during the passage of Hurricane Irma. The management building houses the company’s cashiers, administrative offices and accounts offices amongst others. The Distribution Building was also damaged.

The generators were spared the wrath of Hurricane Irma. The damages to the main building are so extensive, that it is currently not possible to use. Gordon, said workers are trying to see what they can salvage from the rubble.

Up to Tuesday, the company could not yet put a figure to the damage incurred to its network and buildings. Assessments are still being conducted, Chief Financial Officer (CFO) Iris Arrindell said, while working from a desk outside the management office on Tuesday, surrounded by colleagues.

Arrindell said GEBE currently has its entire workforce, about 260 workers, out in the field working to restore power and water to the various districts.

As it relates to water restoration, the company has been trucking water into the various districts daily. Gordon said the company is looking to open either water valves or fire hydrants in the various districts so that residents can get water on a more sustained basis while GEBE works to restore potable water to each home in every district. For now she said, the water truck stops in one location in the districts and blows its horns to alert residents to its presence.

She said it’s not possible for the water trucks to stop at multiple spots in districts. The company is dependent on residents to alert each other that the truck is in their community so that everyone has a chance to get water.

She urged residents to remove damaged water metres from the ground and put them up on their fence walls so that technicians can pick them up, take them to the office and calibrate them when they pass into their districts. Residents are also being asked to turn off their water metres so that when water is restored it is not wasted in the event that there is a leak inside the resident’s yards.

Electricity
As it relates to electricity, the company has been busy restoring electricity to several areas in the past days. So far electricity has been restored to Belvedere, parts of Cay Hill, Dawn Beach, Ebenezer, Weymouth Hill and Rice Hill. Gordon, said the company has two large crews of workers on both sides of the Cole Bay Hill (AJC Brower Road), working tediously to restore electricity.

“They are checking all transformer houses and meter walls,” she said, noting that areas that have been checked are safe and ready will be powered up as soon as they can until all areas have electricity. As 90 per cent of the company’s electricity cables are underground, this will make the process easier. “Looking at the damages in the various districts to homes, they need to be careful before they power up.”

Gordon urges residents to turn off their main switches to minimize damages to their equipment as electricity is restored to the various areas. “Electricity is being restored slowly, but it’s getting done.”

She said the company will be opening a makeshift office somewhere to serve its customers. It is still to decide where. It will also consider making more use of its Simpson Bay branch. GEBE is also considering opening a call center, where its clients can communicate with them.