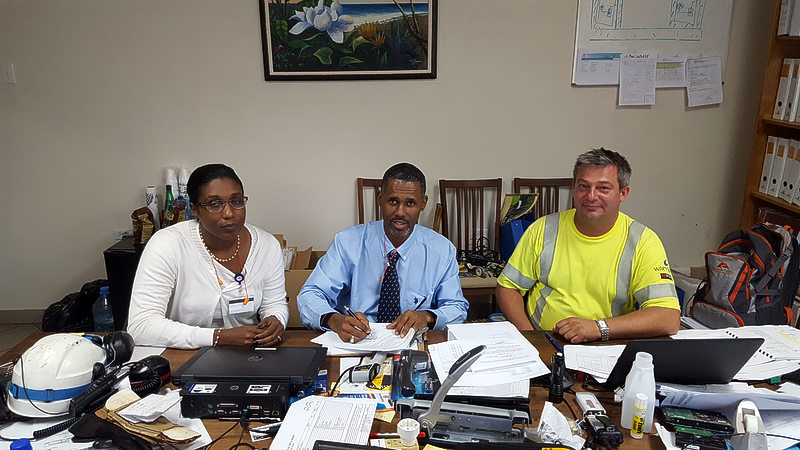 PHILIPSBURG–Consumers can expect a more reliable supply of electricity with the putting into operation of utility company GEBE’s new Engine #20.

The new engine ran for the first time on December 11 and, according to GEBE, had to go through a number of tests to ensure that all safety devices were functional and to ensure that the engine was running according to manufacturer’s specifications, etc. The engine went through its first 10 days of maximum output and was taken down for a final inspection over the past weekend.

The new engine was officially handed over to GEBE for commercial operation at 4:30pm on December 19, after all paperwork had been reviewed and signed off on, GEBE Chief Executive Officer CEO Kenrick Chittick said in a press release issued on Tuesday after receiving several questions about the engine from The Daily Herald.

The contract for the engine was signed during the second week of March. It arrived in St. Maarten and was off-loaded on September 15, and was transported to the Cay Bay power plant on the night of October 15-6. It was lifted into the building that same week and set in its final place, where it will remain for the next 25-plus years, GEBE said.

“The official handing-over date was set for December 15, so we can very well say that the project was a success,” Chittick said.

The engine’s output is 11.3 megawatts and it is capable of running on liquid natural gas (LNG), HFO and diesel fuel. It is referred to as a “dual fuel engine.” The engine has 12 cylinders and a piston bore of 500mm (12V50 DF). It is fully computerised and is equipped with the latest technology.

“It is the intention of NV GEBE to peruse LNG and convert two of the previous engines to LNG once this gas becomes available on island,” the company said. “LNG is a much cleaner operation and this would reduce our exhaust gas emissions. This will have a significant improvement to the environment, as NV GEBE is moving towards being more environmentally friendly.”