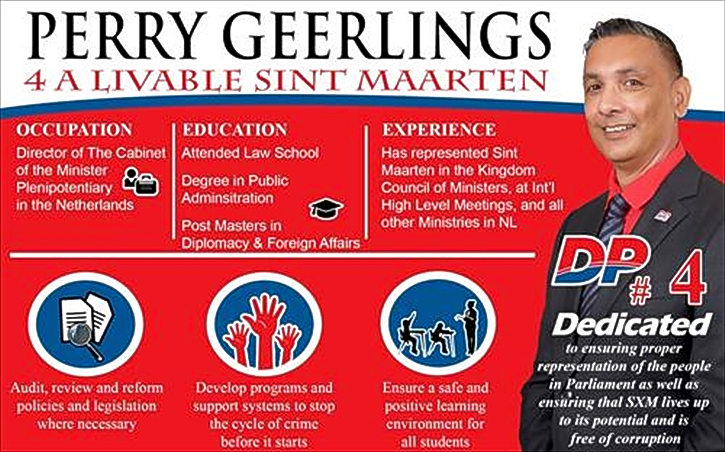 Geerlings ran as number four on the slate of the St. Maarten Democratic Party (DP) in the September 26, 2016 elections. As the third highest vote getter of his party with 146 votes, he surpassed number three on the slate, Director Sector Health Care Affairs Jorien Wuite, who secured 52 votes.

Since number two on the DP slate Emil Lee has been appointed Minister of Public Health and Labour, his position in the Parliament has become available. As the third highest vote getter, this position would go to Geerlings.

Contacted by The Daily Herald on Wednesday, Geerlings said that the taking up of his position as Member of the St. Maarten Parliament was “seriously under consideration.” He said that he was “committed” to St. Maarten and the further development of his country.

Geerlings is awaiting a decision of the Electoral Council as to the vacant seat in Parliament. After that, Geerlings said he would announce his decision. Geerlings has been in touch with the DP and its Leader Sarah Wescot-Williams regarding this issue.

Geerlings has been the Director of the Cabinet of the St. Maarten Minister Plenipotentiary since November 2011. In those five years, he has established good contacts within The Hague. Before moving to the Netherlands, he worked at the trust and management office Smitco in St. Maarten.