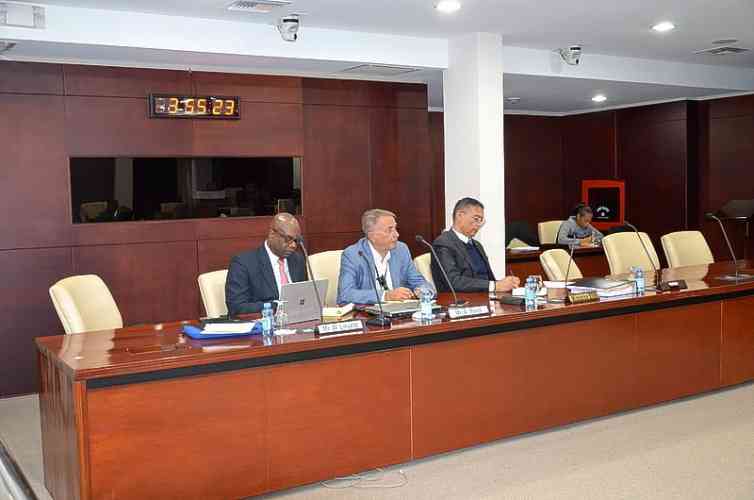 Members of Parliament (MPs) from across party lines were critical of several aspects of the draft budget, including the NAf. 4 million allocated for “a pool of external assistance” such as consultants; the NAf. 800,000 for an “executive protection unit,’ which some saw as personal bodyguards for ministers; NAf. 800,000 to renovate Government’s meeting room and kitchen; and NAf. 600,000 for seven new vehicles for ministers set to cost US $50,000 each.

Geerlings also came in for criticism for the absence of funds for critical institutions such as Mental Health Foundation (MHF) and the slashing of funds for what some MPs saw as important posts.

In opening remarks during the meeting of the Central Committee of Parliament, Geerlings said government had managed to trim the budget from its original figure of NAf. 503 million, which was rejected by the Committee for Financial Supervision CFT, to NAf. 478 million, without cutting expenditures.

Geerlings said government had reached the lower amount by correcting incorrect figures in personnel expenses, through depreciation of expenses, and by temporarily lowering the number of vacancies in government.

In comparing the 2018 and 2019 (draft) budgets, Geerlings said that while income for 2018 originally had been budgeted at NAf. 303.4 million, government surprisingly had received a higher income particularly due to turnover and wage taxes. The current income estimate for 2018 is approximately NAf. 375 million.

The income budgeted for 2019 consists of NAf. 401.1 million in regular income.

“Furthermore, we expect concession fees to recover. The harbour [Port St. Maarten – Ed.] and GEBE are optimistic for 2019, as tourism will start to pick up with the reopening of hotels, timeshare units and cruise tourism.

“Besides the NAf. 401.1 million budgeted in regular income for 2019, extra income of NAf. 10.5 million is budgeted, bringing the total income for 2019 to NAf. 411.6 million. This extra NAf. 10.5 million should be the result of income-generating measures still to be decided upon and due to the early effects of the complete restructuring of the Tax Department, amongst which [we expect] an improvement in compliance.”

The Finance Ministry will be allocated NAf. 54.7 million in the 2019 budget, a reduction from the NAf. 58.5 million it received in 2018. Personnel expenses are NAf. 2.3 million lower than in 2018. NAf. 800,000 is to be allocated for APS premiums. A total of NAf. 4 million is budgeted for “a pool of external assistance such as consultants,” Geerlings said.

The pool of external assistance is for the entire government, and all ministries will be given the possibility to “hire extra specific knowledge or experience for a certain task or certain projects for a certain period,” he said. “The pool is based upon the policy initiative that could be found in our governing programme and the pool will be managed by SOAB [Government Accounts Bureau].”

Also taken up in the Finance Ministry is a negative amount of NAf. 2.5 million in expenses as part of still-to-be-determined cost-cutting measures for government for 2019. Depreciation expenses for 2019 are NAf. 3.5 million lower than budgeted in 2018 based on preliminary figures in the annual accounts for 2016 that were recently prepared, Geerlings said.

In 2018, the Finance Ministry had budgeted NAf. 1 million for insurance premiums for buildings. However, Geerlings said this should have been under the Ministry of General Affairs and is not budged under Finance for this year.

The amount budgeted for the Justice Ministry went up to NAf. 77.4 million from the 74.2 million budgeted in 2018.

Personnel expenses are NAf. 3.4 million lower than in 2018, of which NAf. 1.3 million is due to lower civil servants pension fund APS premiums, Geerlings said. Also, an amount of NAf. 5.4 million has been deducted in personnel expenses that are paid for by external institutions such as the Coast Guard, the Cabinet of the Prosecutor-General and the Prosecutor’s Office. Geerlings said these cabinet expenses were not correctly budgeted in past years.

He said some agreements had been signed with the Netherlands in October 2018 to restore and improve the situation at the Pointe Blanche prison and other detention facilities. In the draft 2019 budget, more than NAf. 10 million has been budgeted for this purpose, of which more than 50 per cent is in the capital account.

Also budgeted is the establishment of “an executive protection unit” to the tune of NAf. 800,000, which came in for criticism from some MPs as bodyguards for ministers.

Geerlings said the contribution to the joint effort for the Coast Guard was raised in the draft budget because of an investment programme to which St. Maarten is required to contribute its share of NAf. 1.5 million annually.

Geerlings said the most important change in this ministry is that personnel expenses are NAf. 7 million less for 2019 primarily due to the transfer of “some special units” to Parliament’s chapter of the budget, and to lower pension premiums to be paid to APS based on changes in the pension law. The lower premium is NAf. 2 million.

“The end effect is lower personnel expenses in an amount of NAf. 9 million,” he said.

Service Level Agreements and Licences are budgeted at NAf. 1.75 million higher in 2019 based on ongoing modernisation of information communication technology (ICT) in government. Other goods and services are set at NAf. 1.2 million higher than in 2018 because of “a reservation in case of any disaster that might happen in 2019.”

Facility Management will receive NAf. 300,000 extra for insurance premiums for buildings in 2019.

The Ministry of Education, Culture, Youth and Sports (ECYS) will see a reduction in the amount it receives in the draft budget. Allocated for the ministry is NAf.123.4 million, down from the NAf. 128.5 million budgeted in 2018. Personnel expenses are budgeted at NAf. 27.5 million, down from the NAf. 31.3 million in the 2018 budget. The APS pension premiums are NAf. 1.4 million lower than last year. NAf. 1 million is budgeted to establish a new law education programme.

The education reform project will receive NAf. 600,000 less than in 2018. The community schools project is also allocated NAf. 500,000 less compared to 2018. Subsidies for education have also been lowered by NAf. 1.1 million in 2019, based on “developments seen in the number of students and other criteria.”

The St. Maarten Student Support Services (SSSD) budget is NAf. 150,000 less for external personnel for 2019. Public education service requires NAf. 350,000 more in 2019 for the upkeep and cleaning of schools.

Like most other ministries, the Ministry of Health, Labour and Social Affairs VSA was allocated NAf. 68.7, which is down from the NAf. 77.6 million budgeted in 2019. Personnel expenses are NAf. 2.4 million less than in 2018, of which NAf. 700,000 is a result of lower pension premiums.

Projects and activities undertaken by bureau staff are budgeted at “almost zero” for 2019, while the amount was NAf. 2.5 million in 2018. The main reason for the decline is because most post-Hurricane Irma initiatives have been finalised.

NAf. 1 million is budgeted for the handing of “possible calamity regarding the social development of society.”

In the Department of Labour, negative expenses are budget at NAf. 3 million with respect to the compensation from the World Bank Trust Fund for cost of the Hospitality Training Programme that began in 2018.

For social insurances, Geerlings said “the calamity cost for people in need” was lowered by NAf. 1.5 million compared to the 2018 budget because of expected social recovery progress made after Irma. The cost for health insurance for civil servants is expected to increase by NAf. 1.6 million in 2019 in comparison with 2018 mainly because of “higher rates and a growth of formation.”

Government’s contribution to Social and Health Insurances SZV for family members is expected to be NAf. 2.1 million less compared to 2018. “The expectation is that with society recovering, less people will be in need of all types of medical assistance,” Geerlings said.

A total of NAf. 24.7 million has been allocated for the Ministry of Tourism, Economic Affairs, Transport and Telecommunications (TEATT) in the draft budget, down from the NAf. 27.9 million that was budgeted in 2018. Personnel expenses are estimated to be NAf. 3.1 million less than in 2018, of which NAf. 900,000 is due to expected lower pension premiums.

The budget for the training and education of the staff bureau is NAf. 135,000 lower than in 2018. Projects for an economic development programme and a public transportation assessment are budgeted at NAf. 200,000. Subsidised institutions are budgeted to receive NAf. 242,000 of which NAf. 200,000 is for the gaming control board; NAf. 114,000 for Small to Medium Enterprises (SME) Development and NAf. 100,000 for the revitalization of Philipsburg.

The Ministry of Public Housing, Spatial Planning, Environment and Infrastructure VROMI is slated to receive NAf. 36.2 million in 2019, compared to the NAf. 38.6 million that was budgeted for the ministry in 2018.

A total of NAf. 23 million is budgeted for “Parliament, high commissions and various entities,” for 2019, up from the 18.3 million that was budgeted in 2018. Geerlings said the higher budget amount is due to organisations such as the Council of State, Social Economic Council, the National Security Service VDSM and pensions being transferred “to this chapter from other chapters,” particularly from the Ministry of General Affairs.

“In this budget, we transferred those components into the budget of Parliament, High Commissions and various entities. It is these transfers that makes budget 2019 NAf. 4.7 million [higher] compared to budget of 2018.”