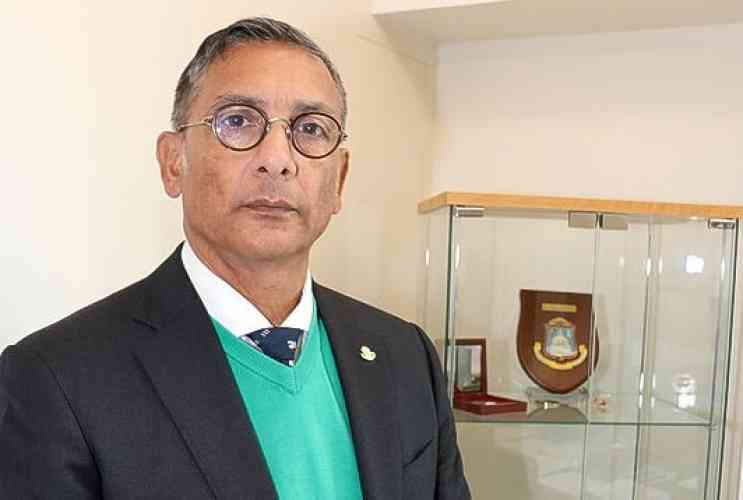 PHILIPSBURG–Finance Minister Perry Geerlings responded on Monday to a call made by the Consumers Coalition for information on how the planned tax reform will benefit workers and the small man.

At press conference on April 12, Coalition representative Claire Elshot asked a number of questions about the proposed reform of the tax system, which was reported on in an article that appeared in this newspaper on April 13.

Elshot said all changes in the tax system have thus far benefitted business, investors and government, and asked how the proposed tax reform would benefit consumers and the “small man” in particular, and how these tax reform proposals would bring down the cost of doing business in St. Maarten and consequently bring down the prices of goods and services in St. Maarten’s “very high-priced economy.”

Geerlings said that until now St. Maarten did not have a tax reform. According to him, the tax reform proposals include rates reduction in income, wage and profit tax. He said as a result, labour cost for employers would be reduced, as labour cost is the sum of the net wage plus wage tax and social premiums (employees’ and employers’ part).

“As labour costs decrease, the prices of goods can decrease and the cost of doing business in St. Maarten becomes lower, making it more attractive for investors to invest in St. Maarten, resulting in a growth in employment,” Geerlings said in a press release. “In this way, consumers and in particular the small man benefit from the proposed tax reform.”

He said in a free market economy such as St. Maarten, “prices of goods are determined by the market and businesses are not obliged to lower their prices if their labour costs decrease.”

He alluded to Elshot’s statements that for wage and income taxes, government will seek to broaden the tax base, simplify execution and control by eliminating deductions such as gifts, reduce the ceiling of interest deduction for personal home and professional expenses (in relation to employment), the abolition of arbitrary/accelerated depreciation and reduction of investment allowance, replacement reserve, premiums for voluntary pension, life insurance, annuities, and widows/widowers pension FZOG premiums.

He called incorrect, Elshot’s statements that the Ministry of Finance and government want consumers to pay more wage tax by broadening the tax base and by eliminating, abolishing deductions that workers can make which will lower their taxable income and enable them to pay less taxes.

“Taking away these deductions will be a punishment for the workers by taking much more money out of their salary and wages and leaving them with less money to spend or buy goods and services which become more and more expensive. In other words, this government wants to make it attractive for businesses, charging them less taxes and charging us, the workers, more and more. This is the tax reform in the pipeline?

“As the Minister of Finance in a press release asked us to be factual, let him bring the facts so that everybody can know how the tax reform of the wage tax will benefit the workers,” Elshot had said at the press conference.

“This means that in general the tax burden in the income, wage and profit tax will remain unchanged after the tax reform and that this government absolutely does not want the workers to pay more wage tax by broadening the tax base.

“Considering this, the statement of Mrs. Elshot that taking away these deductions will be a punishment for the workers, by taking much more money out of their salary and wages and leaving them with less money to spend or buy goods and services, is not correct.”

He said, for example, if the average rate in the income and wage tax is now 40 per cent, the wage tax base of a worker is NAf. 100 per year and he is entitled to a total amount of deductions of NAf. 50 per year in the income tax, then the following will take place:

In the current tax system, the employer is withholding a total wage tax of NAf. 40 per year. His net salary will therefore be NAf. 60 per year. After filing his income tax return over a certain year, claiming the relevant deductions, his taxable income will be reduced to NAf. 50, so that after a long period he will recover his overpaid wage tax of NAf. 20 via a complicated procedure by means of a tax refund. This means that his net salary then is adjusted to NAf. 80 afterwards.

In the proposed tax reform, in which the relevant deductions are abolished, the wage tax rate (and income tax rate) will be, for example, 20 per cent and his taxable income and wage tax base will be NAf. 100. This will result in a withheld wage tax per year of 20 per cent on a taxable wage of NAf. 100 and therefore in a net wage per year of NAf. 80.

“However, [the taxpayer – Ed.] will not receive a tax refund anymore after filing his income tax return for a certain year. This implies that the same worker now receives the NAf. 20, which he would otherwise receive by means of a tax refund by applying the relevant deductions afterwards, as a net wage. This is a much more efficient way to receive his ‘refund’ while he does not have to fill in a complicated income declaration form to correct his net wage. In this way, the worker benefits from the tax reform,” Geerlings said.

The minister also alluded to Elshot’s statements that based on information Geerling’s presented to parliament, the idea is to broaden the tax base, make it practical and easy to control by eliminating exemptions, and keep the rate at five per cent. “In other words, no more exemptions for the consumer and the small man. Does that mean that more goods and services will fall now under the ToT (Turnover Tax)?” Elshot asked.

Geerlings said he will grant the Consumers Coalition request for him to “come up with the facts” of the new ToT tax system that government is preparing.

“I will grant this request after the relevant legislation drafts are ready. Hereafter, I will submit them to the Consumers Coalition for comment, as only then all proposed changes will be clear. I can already assure you that the current ToT burden for the poor and the needy consumers in our society will be maintained after the ToT reform,” Geerlings said.