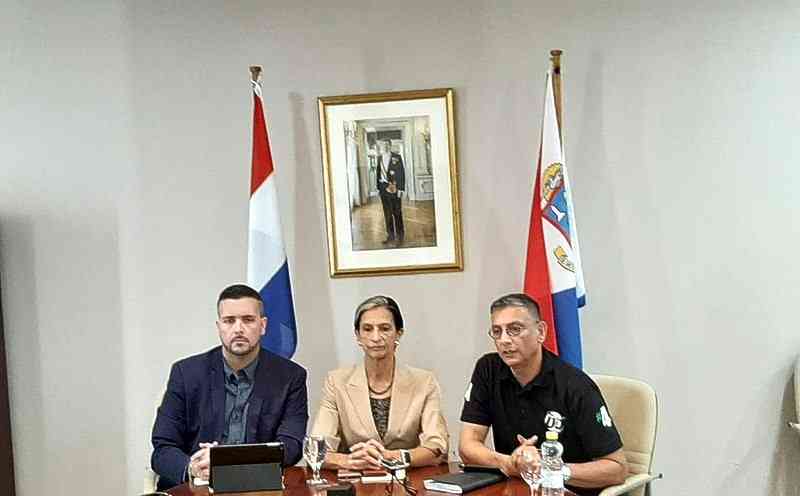 PHILIPSBURG–Former Caretaker Justice and Finance Minister Perry Geerlings denies that decisions he made regarding the still-to-be-received retroactive payment for justice workers, while he had been in office were politically motivated and urged the sitting government to address the issue post haste.

He made the statements in a press release issued on Thursday as well as during a press conference held jointly with United Democrats (UD) Leader Member of Parliament (MP) Sarah Wescot-Williams and former minister Stuart Johnson on Friday, in which several issues were raised including what Johnson referred to as a clear “split” in the current governing coalition of nine and assertions by Wescot-Williams that the Mullet Bay Inquiry Commission is not bipartisan.

Geerlings said while he was caretaker Minister of Justice, he met with unions representing justice workers on the concerns of their members. During that meeting, it was agreed that funds from the sale of St. Maarten’s shares in United Telecommunications Services (UTS) would go towards the settlement of the arears owed to justice workers.

“I expressed my commitment to the unions that I will try my utmost in my capacity as Minister of Finance, even in the short period left, to come up with a solution or a start to the solution needed,” Geerlings said in his press release.

Geerlings said along with his team, “a solution was put on track,” with the expectation that if necessary, the next government “could continue to finalize the solution.” Instead of this happening, he said “political bickering,” which he called “quite unfortunate, unnecessary and uncalled for,” is happening.

According to Geerlings, proceeds from the sale of UTS were earmarked for the retroactive payments of justice workers and possibly other civil servants in the Justice Ministry and to repay part of the debts that government owed the TelEm Group. The first instalment of payments to TelEm had a contractual date and as a result the first tranche of UTS monies went to TelEm “in order to stay at least compliant.”

“It is correct that the remaining proceeds of the UTS sale were delayed. Not by me not acting on the legal questions that came up on the contract, but (because of the lengthy) time it takes in St. Maarten to execute and finalize things.”

He called Doran’s statements that the same dollar cannot be spent twice as “nonsense.” Doran was suggesting the funds that went to pay TelEm cannot also be used to pay the justice workers.

“For paying advances on a later-to-be-decided-date upon final arrangement, you need cash. Not labelled cash, but just cash as the moment of the formal arrangement is decisive for the budget and the consequences with respect to the Law on Accountability. Advances are a balance mutation and have nothing to do with budget 2019,” Geerlings said.

“In my vision, St. Maarten would be able to pay out advances before Christmas to personnel who would most likely fall in a final arrangement in 2020, out of the available liquidity. Besides, we were also supposed to receive NAf. 21.3 million in liquidity support still over 2018.”

The former minister said he pointed out in a letter to Governor Eugene Holiday that all official documentation (legal position, function book and new salary table) should be finalised in 2020 before the final arrangements can be worked out and executed. “Only then it will influence budget and or previous annual accounts based on the retroactive part that applies to the past,” Geerlings said.

“It is easy to mix up things for political reasons as most people don’t understand exactly how finance and accountability work, but to state big words like ‘I pledge’ is quite useless and unnecessary as the solution is already in place and rather quite simple.”

He stressed that members of the police unions and personnel of the Department of Financial Policy, Taxes and Budgeting FBBB discussed the most probable and logical basis of making the retroactive payment and came up with a scenario that had consensus. All members of the force were individually looked at based on this consensus model. Since advance payments are not subjected to tax and social premiums, an advance payment of the consensus calculations can be made to the workers. Corrections can be made once the formal arrangements are made.

“In the memorandum of understanding between the unions and me, it is clearly stated that possible corrections that occur after all laws and regulations are finalized will play a role and will be considered in the final settlement.”

Geerlings said “it is a bloody shame that after almost 10 years of autonomy…still our police force and others are not arranged for in a correct manner. And also (that) an interim government even at this moment in time plays politics with these dedicated people who serve the people of St. Maarten probably much better and with greater risks than politicians will ever do.”

Geerlings said “I still believe I created an opportunity to correct our wrongdoing as politicians (Parliament as well as governments in the past) in a two-stage solution: Pay out most likely advances in 2019 and correct and implement all necessary legal documentation via the proper institutions within government (like Personnel and Organisation and Legal Affairs and Legislation) in 2020 and solve the issue for once and for all.”

He called on the current interim ministers to make use of “the knowledge available” in the various ministries “before making mistakes on what is lawful or not. And since time is of the essence, we cannot afford to lose precious time any further. Mind you, Parliament still needs to handle the amendment on the initiative law regarding the UTS sale in order to get the additional US $5 million paid out. This can and should be accomplished before the Christmas recess.”

In his press release Geerlings also responded to statements made by sitting Justice Minister Egbert Doran questioning the legality of the ministerial decree Geerlings put in place. Geerlings said the decree was to bring a final solution to the various personnel affairs bottlenecks “back to the place where they belong within our government: the centralized functions for the whole government within the Ministry of General Affairs, in this case specifically the Department for Personnel and Organization (P&O).”

Geerlings said this was not his decision but a formal decision of the Council of Ministers earlier in 2019, which was not immediately executed “due to the various political developments in the second half year of 2019.”

“The Council of Ministers took this decision because of being convinced that a chosen government model in which certain specific functions are centralized within the Ministry of General Affairs to operate for the whole government, should not be hampered by ministries who decide to take things into their own hands because this could and would most probably jeopardize general policy development and unity within government as a whole.”

He said also that a department like P&O is supposed to consist of various professionals who together have the tools and techniques needed to perform up to desired standards. “This is not the case when a certain ministry does things themselves independent from central policies and procedures.”

Geerlings also responded to Doran’s statements that the former minister had sent a letter to Governor Holiday indicating that “pressure is being applied by various stakeholders.” Geerlings said he never used the word “pressure” in his letter.

Reacting to Doran’s statements that no one was present when Geerlings made a commitment to unions representing justice workers, Geerlings said also present were Director of the Cabinet of the Minister of Finance, his legal advisor; Secretary General of the Ministry of Finance; personnel of FBBB and the Treasury Department within the Ministry of Finance, whom, together with the unions, “worked very hard and diligently the days before to check all the facts and figures.”