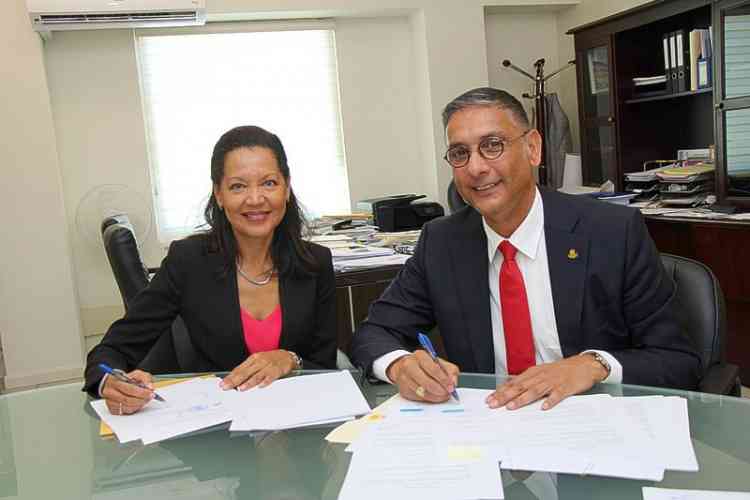 PHILIPSBURG–Finance Minister Perry Geerlings on Wednesday signed a settlement agreement with the TelEm Group regarding outstanding debts owed by government.

The agreement relates to a substantial outstanding amount government owes to the telecoms company and covers the period 2005-2018. The original outstanding amount as per December 31, 2018, was NAf. 5 million higher than the agreed upon amount reflected in the settlement agreement between government and TelEm Group, it was stated in a press release.

Government and the TelEm Group were able to agree on a NAf. 5 million discount under the condition that government would comply with the payment conditions as agreed in the settlement agreement.

In the agreement, government agrees to pay back the total amount of the outstanding debt in the period September 2019-December 2024 in monthly instalments and two additional payments will be made: one in November 2019 and another at the beginning of 2020. The additional payment in November is being financed from the proceeds of the sale of telecommunications provider UTS shares.

Similar settlement agreements were signed with Social and Health Insurances SZV and utilities company GEBE in August. A similar agreement is still to be signed with general pension fund administrator APS.

The settlements are in keeping with the instruction St. Maarten received from the Kingdom Council of Ministers regarding arrears, based on advice from the Committee for Financial Supervision CFT in 2015.

Geerlings “has made it one of his priorities to comply with the instruction, to ensure payment arrears are reduced instead of increased,” the release said.

Government has been trying for several years to make progress with repaying debt, but there was no significant progress and arrears were increasing.

With the current settlement agreements, the outstanding debts and payment schedules are clearly defined. With this, government is able to clean up its financial administration and improve its financial accountability towards the people of St. Maarten and other stakeholders, it was stated in the release.