Home Headlines & Top Stories Geerlings tells MPs: Don’t pass law and you will see what will... 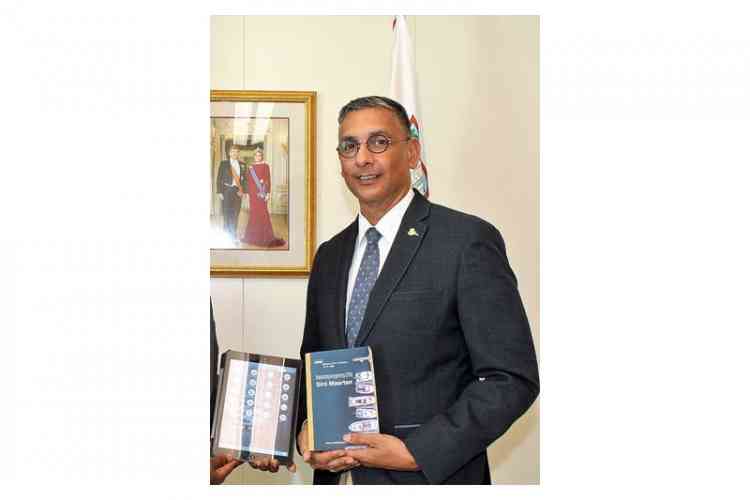 PHILIPSBURG–A statement made by Finance Minister Perry Geerlings to Members of Parliament (MPs) that if they do not pass the draft national ordinance amending the general national ordinance on taxes in connection with international obligations, was not received well by some MPs.

Geerlings made the remark while answering questions during a public meeting on Wednesday afternoon. “Just don’t pass this law and then we will see what will be affected,” Geerlings told MPs. He was stressing the importance of the legislation being passed and the potential ramifications if it is not passed.

United St. Maarten Party (US Party) MP Rolando Brison said the statement sounded like a threat and urged Geerlings to clarify his statement.

“I hear from the floor that my statement is perceived as a threat – maybe see it as such, but as a threat to the country because I know what lies behind if we do not pass the law. It is because of that I made that statement and I stand for what I say. It was no harm meant to any MP,” Geerlings added.

One MP suggested that the agenda point be sent back to the Central Committee for further deliberations. Chairperson of Parliament Sarah Wescot-Williams said based on this proposal, the meeting will be suspended. The intention is for the agenda point to be further elaborated on. Wescot-Williams said any persons or institutions whom the minister feels can provide more info can be part of that meeting.

Geerlings had also said earlier in the meeting that it was probably best to deliberate the legislation again although most of the questions asked by MP Brison, had been asked in the Central Committee meeting and were answered.

In giving background information on why the legislation is necessary, Geerlings said at the start of the meeting that on April 19, 2013 the G20 Finance Ministers and Central Bank Governors endorsed automatic exchange of financial information as the expected new standard.

“They recognised that through the adoption of a common approach to automatic exchange of information, offshore tax evasion can be tackled most effectively while minimizing costs for governments and financial institutions,” he said.

With the strong support of the G20, the Organisation for Economic Cooperation and Development (OECD) together with G20 countries in close cooperation with the European Union (EU) and other stakeholders, have since developed the Standard for Automatic Exchange of Financial Account Information. This is a standardized automatic exchange model, which builds on the Foreign Account Tax Compliance Act (FATCA) Inter-Governmental Agreements (IGA) to maximize efficiency and minimize costs.

By letter of October 27, 2014, St. Maarten committed to the OECD to implement the Standard for Automatic Exchange of Financial Account Information (the Standard) in 2018 after taking into account the negative consequences, such as blacklisting, of not doing so.
In addition to blacklisting, it is currently unclear which other negative consequences non-compliance can bring, Geerlings told MPs. “Blacklisting may imply that negative advice is given to invest in St. Maarten and/or that parent companies abroad cannot benefit from the participation exemption on the profits that their subsidiaries in St. Maarten transfer to these companies, as a result of which these profits are faced with double taxation, namely in St. Maarten and in the countries of residence of the parent companies. Consequently, this is very detrimental to the investment climate of St. Maarten.”

The implementation of the Common Reporting Standard (CRS) must be viewed as an OECD assignment that is not open for discussion. The Standard consists of the CRS that contains the due diligence rules for financial institutions to follow to collect and then report the information that underpin the automatic exchange of financial information; the Model Competent Authority Agreement (CAA) that links the CRS to the legal basis for exchange and specifying the financial information to be exchanged and the commentaries that illustrate and interpret the CAA and the CRS.

It also includes guidance on technical solutions, including a protocol to be used for exchanging the information and standards in relation to data safeguards and confidentiality, transmission and encryption.

The implementation of the Standard will have consequences for financial institutions in St. Maarten. The CRS contains the due diligence rules for financial institutions to follow to collect and then report the information that underpin the automatic exchange of financial information. The fact that automatic exchange of information to combat tax evasion can take place stems directly from international agreements which provide the legal basis for the exchange of information, such as the bilateral treaties and the multilateral convention on Mutual Administrative Assistance in Tax Matters (WABB).

CRS provides standard procedures to be followed by St. Maarten financial institutions to identify and report annually to the local tax authorities certain accounts held by tax residents of Reportable Jurisdictions, or accounts for certain entities in which such persons have an interest. Local tax authorities will, in turn, forward the information to the relevant Reportable Jurisdictions with which they have Competent Authority Agreements (CAAs) and accordingly have an obligation to exchange information.

Geerlings said St. Maarten, along with many other countries, has committed itself by signing a Multilateral Competent Authority Agreement (MCAA) to exchange information automatically from 2018 based on the CRS. As a result of major hurricanes Irma and Maria in September 2017, this is no longer possible as the required legislation could not come into effect before December 31, 2017.

“In view of this, the OECD by letter of December 1, 2017, was requested to postpone the automatic exchange of information until 2019. The aforementioned means that the first exchange in 2019 relates to data for the calendar year 2018. The OECD responded by letter of March 29, 2018, indicating that there is an understanding of the situation and the consequential impact on the implementation timelines for Automatic Exchange of Information. However, the Global Forum of the OECD has no formal process for a deferral beyond 2018 of the commitments made.”

Based on existing legislation, St. Maarten cannot currently fulfil these obligations. In the absence of legislation, local financial institutions are not authorized to automatically provide the government with information from account holders available to them. This means that a legal framework is required to implement the CRS. Following the advice of the OECD, the proposed legal framework of St. Maarten consists of a so-called primary and secondary legislation.