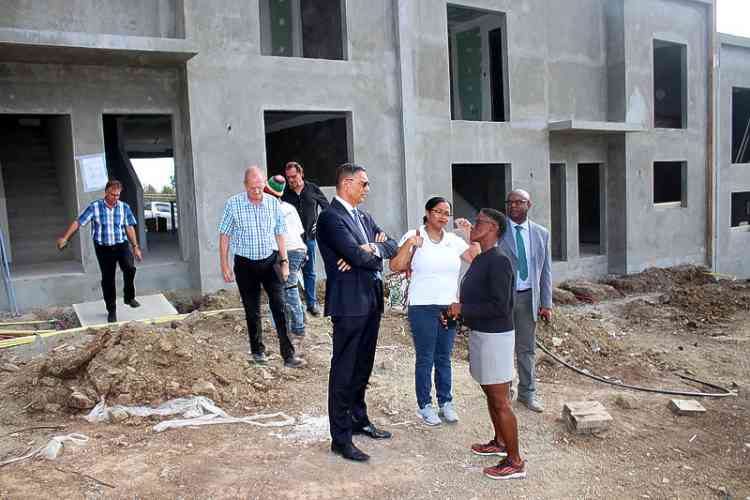 Finance Minister Perry Geerlings speaking to contractors and APS representatives about the project.

Minister Geerlings walking through the property.

Minister Geerlings inside one of the two-bedroom apartments.

The project is 60 per cent complete, according APS, and should be completed at the end of the summer this year.

Geerlings did a walk-through of the property and received a progress report from contractor Liccom and APS management. The Minister said he was satisfied with APS’ decision to invest in the development of homes for residents.

“This means that those paying into the pension fund such as teachers and police officers along with government administration workers can have the opportunity to benefit from the fund even before entering pension age, and become homeowners, which by itself is a great achievement,” Geerlings said in a press release issued Thursday night.

The idea behind the design of the complex is to recreate the St. Maarten community style of living. It is located on the outskirts of the compound creating an enclosure, making it a private residential area with secured access.

“The complex is impressive and a new concept for St. Maarten that offers a very high-quality product to potential homeowners,” Geerlings said.

Persons interested in becoming owners of any of the Oryx Residences are encouraged to visit the APS office and apply.