Home Headlines & Top Stories Geerlings: ‘We are not selling out, we are securing our assets’ |... 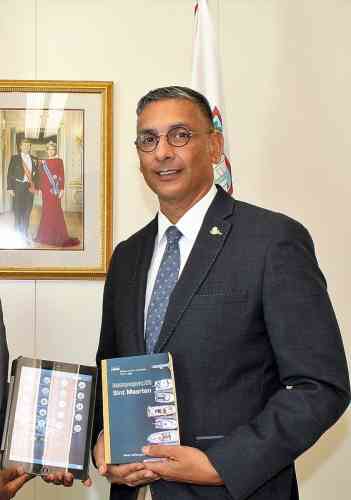 PHILIPSBURG–“We are not selling out, we are securing our assets.” This was the firm statement made by Finance Minister Perry Geerlings on Wednesday in relation to Princess Juliana International Airport’s (PJIA’s) terminal reconstruction project.

“Over the past year, I have heard people say, ‘We would just give the airport a guarantee for 50 or even 100 million dollars,’ and I have had to read in the media about new loan proposals of up to 240 million. …

“This country really needs to wake up. The Government of St. Maarten is legally and financially not able to provide a guarantee of tens of millions of dollars and any new loan requires collateral. The question would be: what would be this collateral? Our patrimony, the airport terminal and operations? This Council of Ministers and certainly this Minister will not allow this country to sell out our airport like that. Not on my watch,” Geerlings made clear.

He said a list of legal agreements is being concluded in relation to the airport terminal reconstruction project.

He said the country can stand as guarantor for these financial arrangements. “Prior to these agreements, the Government of St. Maarten has already concluded agreements with the airport for $20 million in financing. This bridge financing is currently being used by the airport to avoid bankruptcy, to pay its employees and to continue the ongoing works in the terminal.”

All other agreements are in their final form and with the Council of Ministers. “We are talking about agreements with a total value of more than $200 million. Hence the need for proper due diligence. The people of St. Maarten will soon read in the newspaper about actual signing ceremonies rather than fluffy presentations.”

With the “attractive” financing of the Trust Fund, the EIB and the Government of the Netherlands, PJIA will be able to flourish and continue to grow as a regional hub.

“Personally, I foresee a great future for our airport with major improvements, including an extension of the runway and, yes, with a US preclearance facility. I’m certain that any government that sits in our seat will do everything in their power to support the airport when asked to.”

He assured that the Council of Ministers will continue to negotiate the bilateral treaty with the US on preclearance.

Geerlings alluded to the summary regarding the financing of the airport terminal reconstruction project provided by Prime Minister Leona Romeo-Marlin last week, saying, “I’m confident that her press statement has helped to address the speculation about other financing options for the reconstruction of the airport. I’m also confident that the recent press release of Vidanova has provided further clarity about what is real and what is just speculation when it comes to the financing of our airport.”

He said, “What is real is that the Council of Ministers and the Parliament of St. Maarten have adopted the 2019 budget and that this budget includes provisions for the financing of the airport terminal reconstruction project by the World Bank Trust Fund, the European Investment Bank and the Government of the Netherlands.”

He said the Council of Ministers and Parliament also supported the budget because of at least three things: The importance of financial assistance for the airport, because it has faced delinquencies on its debt since Hurricane Irma; that the offered financing of the Trust Fund and the EIB is and continues to be the only tangible option on the table that actually aligns the interests of the airport, the bondholders and the Government of St. Maarten; and the offered financing for the airport through the Trust Fund and the EIB is extremely attractive for PJIA and the country itself with below market terms.

The latter also includes a grant from the Trust Fund that will ultimately flow back into the national budget, which Geerlings said can be used for some other purposes.