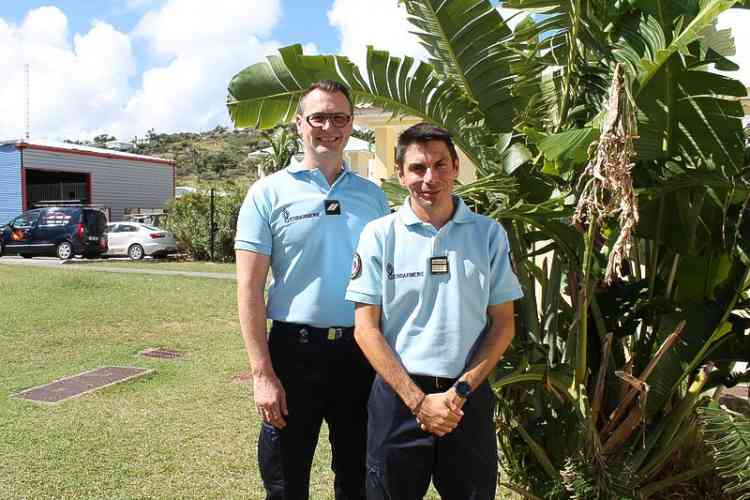 MARIGOT–Lt. Colonel Sébastien Manzoni said the Gendarmerie plans to reorganise its operations for greater efficiency, security and proximity to the population, at a press conference on Tuesday.

“Currently we have two stations, one in Marigot and one in French Quarter, and from an organisational standpoint they are both linked, but neither is autonomous from the other in its area,” he explained. “What I want is to create a new brigade with total autonomy in its area of operation, and we are looking at achieving this in Grand Case.
“Because you have Marigot and French Quarter, but nothing, no station, in the middle. And with the airport expanding and a revival of economic activity in Hope Estate, Grand Case makes sense to us.

“The next thing is to think about the future for Sandy Ground and French Quarter. We have a station in French Quarter, but we don’t know yet if we are going to stay there or share it with the Territorial Police; for example, three days open with Gendarmes and three days open with the Territorial Police and carrying out mixed patrols. The objective of these plans is to have a better link to the population and to know the population better.”
Manzoni said these changes in organisation will not require an increase in human resources.

“Before Irma we had enough Gendarmes and showed good results on delinquency, so it’s unlikely I will receive any more reinforcements. This reorganisation is more about re-distributing the Gendarmes that we have.

“Another plan is to create a ‘Maison Territorial de la Prevention’ (MTP), for example, in Marigot,” he continued. “A few are operating in France on an experimental basis. It can be occupied by Gendarmes from the Juvenile Delinquency Brigade, social worker (intervenante sociale) and someone specialised in family protection; someone who is trained to assist victims of violence. Here in St. Martin there are many domestic violence incidents.”
He said he hopes an MTP can be installed in Marigot this summer and a team put together.
On another point, a female Gendarme specialised in advising on security prevention, called a “Reférant Sureté,” arrived last week.

“Her job is to visit businesses, shops, small Chinese supermarkets, and look at their security and advise owners on what they need to do to protect themselves better. She will look at locks on doors and windows, security cameras, how the money is kept safe, etc. This job is coordinated with the Collectivité and runs in tandem with alert systems such as neighbourhood watches, and Vigi-Commerce (watch on businesses).

“She is due also to meet the Merchants Association President of Marigot, Jean Lecam, for exchanges on security.”
Manzoni said one of his aims this year is to promote prevention and improve links with the Collectivité, Territorial Police and local actors in the economy.
The press conference was also an opportunity for the press to meet the new Gendarme in charge of communication, Gérard Dumont.