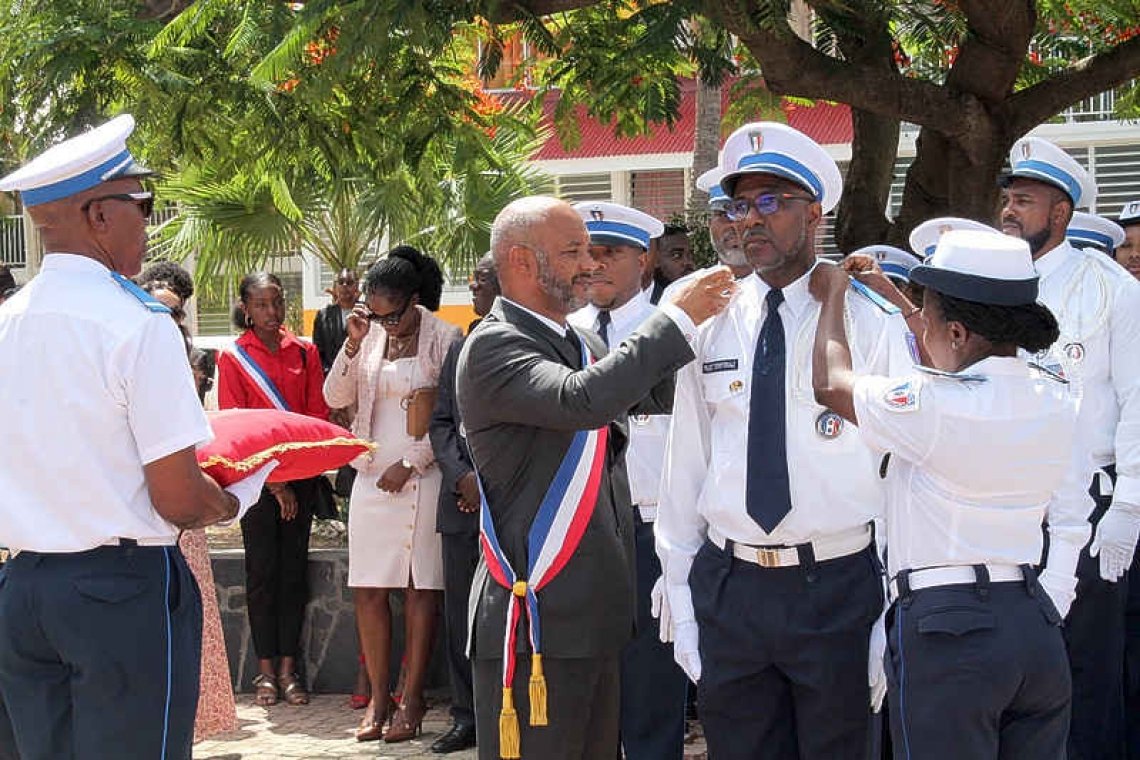 MARIGOT–Three Gendarmes and a civilian were honoured with citations for exceptional acts of bravery and dedication at the Bastille Day wreath-laying ceremony held in the garden of Hotel de la Collectivité on Tuesday.

A modified Bastille Day in the year of coronavirus meant there were neither marching bands, parade, visiting dignitaries nor live speeches under a marquee. The speeches still went ahead, but were broadcast on the Collectivité’s Facebook page and transmitted to a video screen on the first floor of Hotel de la Collectivité, where several Territorial Councillors, Vice-Presidents and others listened.

Wreaths were laid at the war memorial in the garden by Collectivité President Daniel Gibbs, Senator Guillaume Arnell, Sous-Préfet and Secretary-General of the Préfecture Mickaël Dore, and President of the St. Martin War Veterans Association Robert Garon.

Gendarme Capitaine David Raimond was presented with a Bronze Medal for disarming a dangerous individual in Hameau du Pont on May 19, 2020. The man had shot and injured two persons and was threatening to shoot into a crowd that had gathered.

In the first Gendarme patrol to arrive, Raimond dispersed the crowd, then at great personal danger advanced towards the enraged man and persuaded him to eventually drop the weapon, a shotgun, on the ground. The man, angered by a tenant’s unpaid rent, was arrested and the situation brought under control.

Réserve Gendarmes Maud Larrieste and Chandra Papayoute were among the five gendarmes operating a COVID-19 control at the former tourism office roundabout on April 16, 2020. A scooter with two individuals on board attempted to avoid the control and turned around, but crashed in the process.

The riders were able to get the scooter back upright and decided to force their way through the gendarme blockade with the scooter, which resulted in injuries to Larrieste and Papayoute. The two Réserve gendarmes were presented with certificates of congratulation, the first grade for medals for acts of bravery and dedication.

Civilian David Edwards intervened during an armed robbery at a grocery store in Grand Case. Disregarding his own safety, Edwards lunged at the individual holding the cashier at gunpoint in an attempt to disarm him. During the scuffle a second robber entered and shot Edwards in the stomach and in the leg.

Despite his injuries, his attack forced the robbers to flee, but not before Edwards grabbed a crash helmet and a shoe, DNA from which would later identify the robbers. The two bullets fired missed his vital organs. Edwards was also presented with the Bronze Medal by Sous-Préfet Dore.