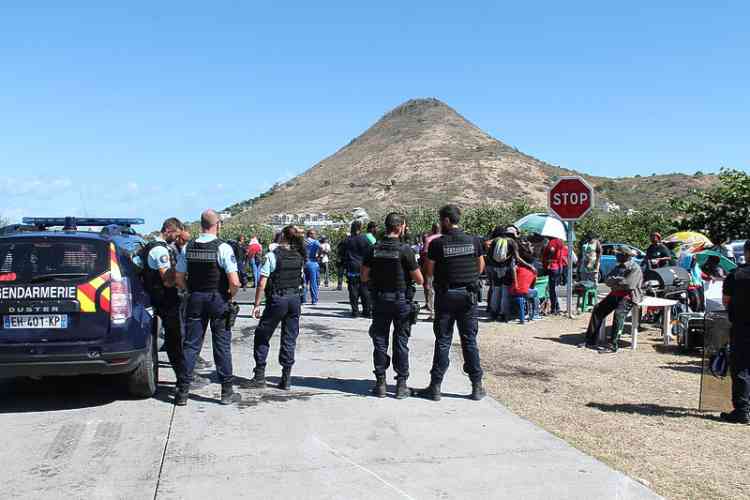 Gendarmes keep a close eye on strikers at the entrance to the Central Kitchen in Grand Case on Monday following the disturbances earlier in the morning. (Robert Luckock photo)

MARIGOT–Despite a plea to the union from the Collectivité to allow access to Central Kitchen staff, access to the facility on the Grand Case bypass was again blocked by strikers from 6:00am Monday, forcing Gendarmes to physically move protestors, obstructions and belongings from the main RN7 road where many had camped overnight, and reopen access to the kitchen.

Video clips posted on social media showed protestors lying on the road crying, and occasional scuffles and confrontations with Gendarmes.

Despite Gendarmes intervening to reopen access, no employees of the kitchen turned up for work, reportedly not willing to work under the tense circumstances.

“We’ve been protesting peacefully and now they put law enforcement on us this morning, who pushed us around, throwing us into the bushes, throwing away our stuff,” complained UTC/UGTG union spokesperson Nicole Javois about the Gendarmes’ actions. “They really manhandled us and most of us are women. It’s a shame. We have employees without a job, they have no revenue, our careers are not moving, the afterschool activities situation is terrible, we are still asking for our bonus.

“Nothing is being done for us. The way we were manhandled this morning was terrible. Because of that, the population is involved now. It’s gone beyond the union. We just want justice for our employees. The first point could be solved but the President [Gibbs – Ed.] has no will to give a piece of bread to St. Martin people for their kids. That’s really sad.”

Despite the disturbances, Javois said the union is still going into the reopened negotiations with the Collectivité starting this morning, Tuesday.

“Our mission this morning was to permit access to the kitchen and that meant removing wrecked cars, tents and other obstructions,” Manzoni explained. “There was some resistance from strikers who refused to cooperate.”

The strikers had requested the presence of elected officials, and First Vice-President Valérie Damaseau and a delegation complied with that request. Discussions on site with the strikers and elected representatives did not appear to improve the situation. A meeting had been held in French Quarter on Saturday, at the request of strikers, to answer questions and explain the situation.

“This situation is harmful for everyone and, above all, harmful for parents and children who have to deal with the daily lack of working canteens and lack of afterschool activities,” she said.

“This is no longer sustainable and that is why we have signed a partnership with three associations on Friday, March 15, so that they can supervise students at the lunch break. We have decided that from tomorrow, a cold meal will be served to the children until further notice. The priority is to restore public service despite the strike.”

The Collectivité estimates 60 employees of Caisse Territorial des Oeuvres Scolaire (CTOS) out of 220 are on strike and 70 out of 875 of the Collectivité.

Regarding the union’s claim that there are 83 vacancies at the Collectivité waiting to be filled, Damaseau explained that is not strictly true.

“It’s about 52 employees who are in an irregular situation,” she said. “We decided to regulate their situation because they have been in an unstable situation without contracts for a long time. The way to do that was to open vacancies to hire and for hiring other staff in the President’s cabinet and social department. So, when you look at the board it does look like 83 vacancies, but 52 have to be regulated and the remaining vacancies are for Category A [management] employee vacancies.”

Green light for motion for CBCS to vet, create banking protection law | THE... 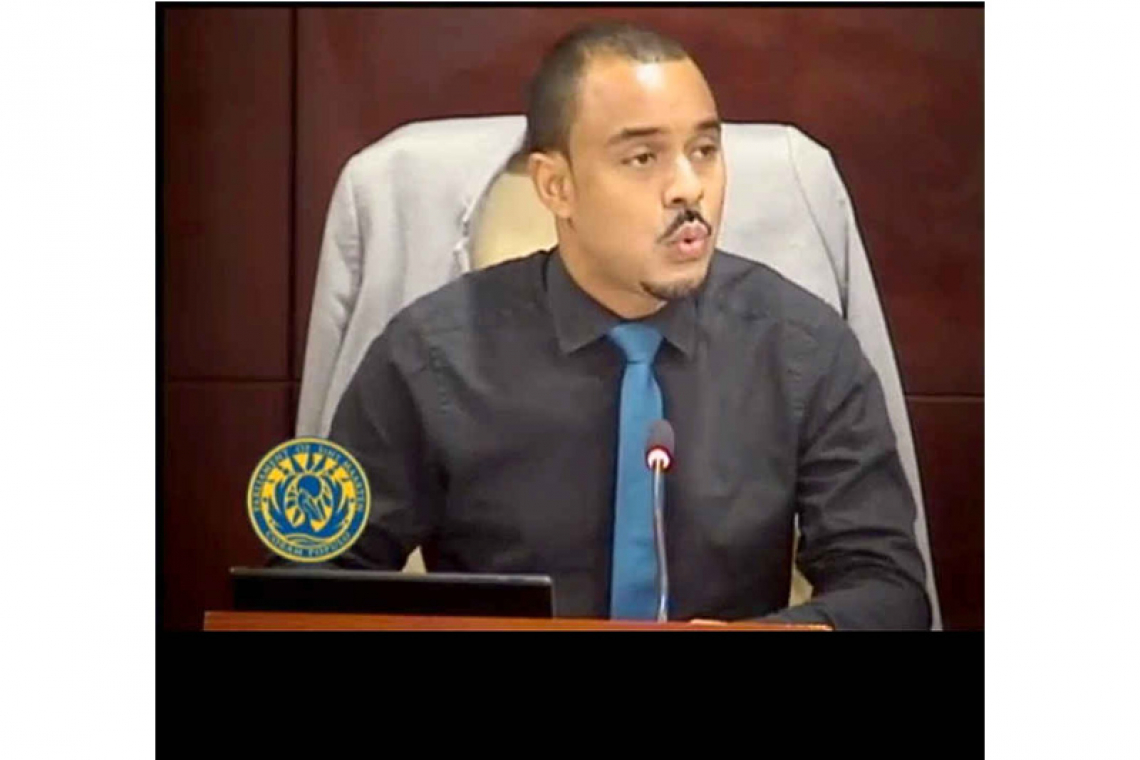 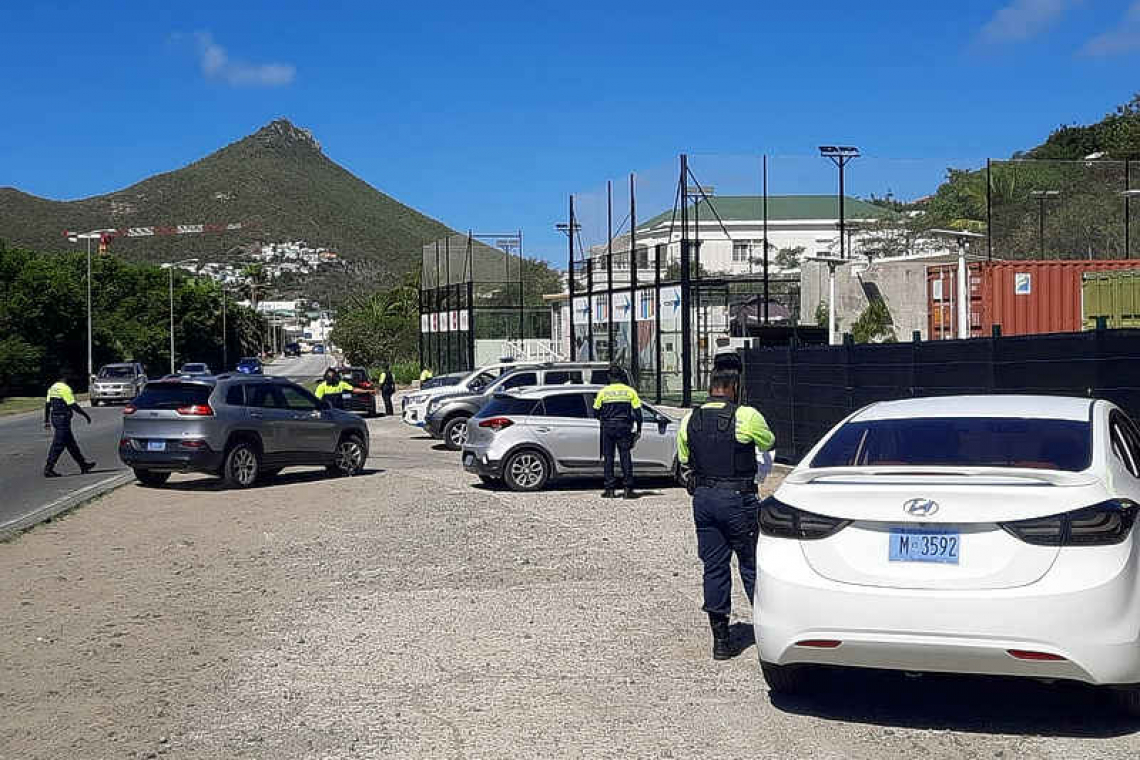 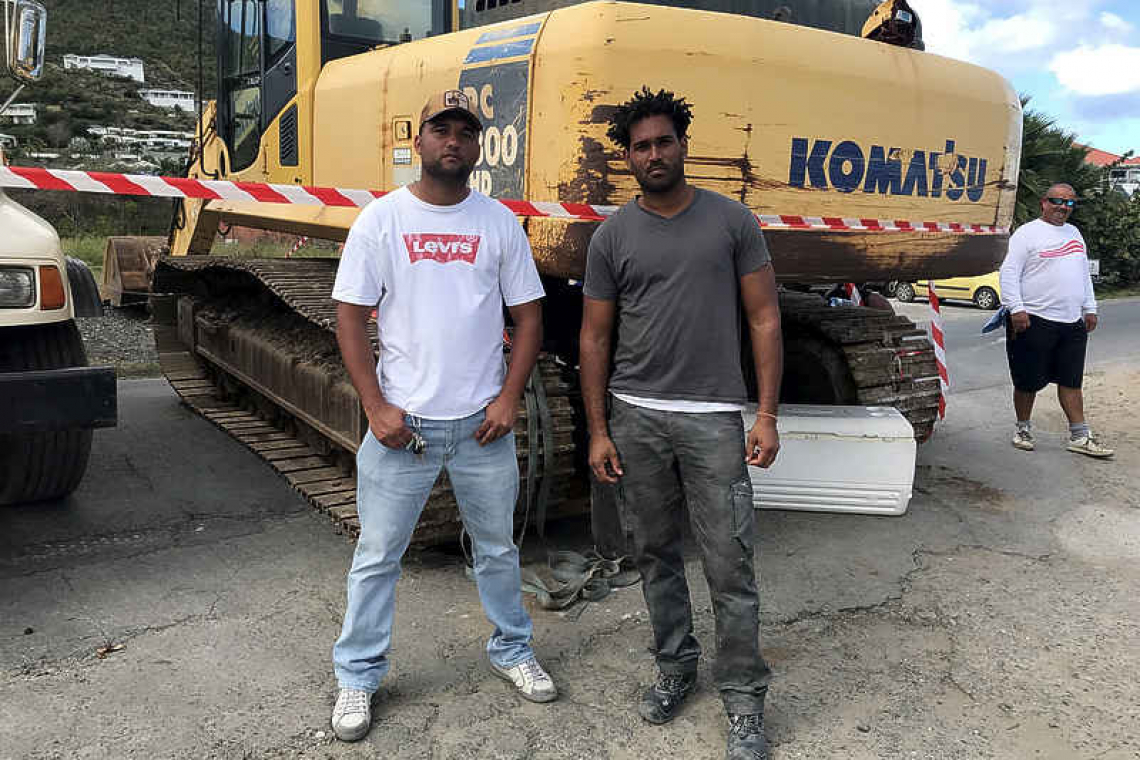