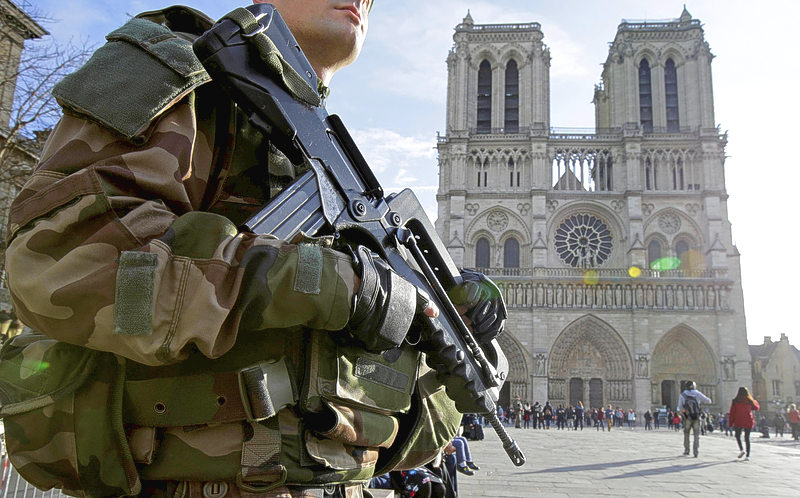 PARIS–French police are seeking a young woman after a car carrying seven gas cylinders was discovered on Saturday night near Notre-Dame cathedral in Paris, police and judicial officials said on Wednesday.

A couple, aged 34 and 29, were also arrested on a motorway on Tuesday in southern France in connection with the incident and remain in custody, one official said.
The car owner was taken into custody but was later released because he had gone to police on Sunday to report that his daughter had disappeared with his car, a second official said. His daughter, now sought by police, is 19 years old and was known to police for having the intention of leaving for Syria, officials said.
The Peugeot 607, which had no registration plates, contained seven gas cylinders, one of them empty, on the front passenger seat, police said. It was found with its hazard lights flashing as if to attract attention, they said.
Interior Minister Bernard Cazeneuve said he was waiting for a report from investigators on what the possible motives were for the incident.
There was no detonating device present in the car, found on a Seine riverside stretch called the Quai de Montebello, metres from the Notre-Dame cathedral, one of Paris’s many popular tourist attractions. Documents with writing in Arabic were also found in the car.
More than 200 people have been killed in attacks by militant Islamists in France over the past 18 months. France remains on maximum alert after calls by the Islamic State group for followers to attack the country, which is bombing the militant group’s bases in Iraq and Syria.
Florence Berthout, mayor of Paris’s Fifth Arrondissement (District), said the incident had highlighted the need to beef up security and put more police on patrol in one of the world’s most visited cities. She told BFM news channel the car had been left in a zone where parking is strictly prohibited and had remained there for around two hours before it came to the attention of police.
Thousands of extra police and soldiers have been deployed to patrol sensitive sites across France since 130 people were killed by Islamist gunmen and suicide bombers in multiple attacks on Paris last November. A state of emergency declared at that time is still in place and gives police extra search and arrest powers, but debate still rages over security levels following a further attack on July 14 in which a man mowed into crowds in the southern coastal city of Nice, killing 86.