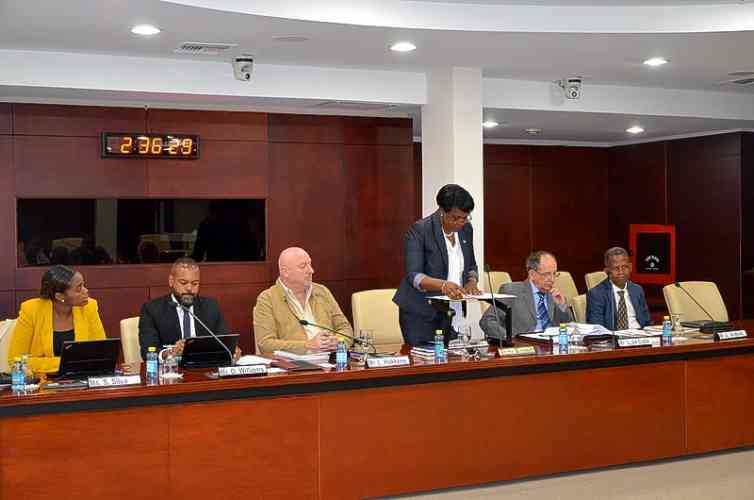 ~ Draft law to go back to Central Committee ~

PHILIPSBURG–Comments made by the General Audit Chamber on the draft National Ordinance for the Revision of the Pension of Civil Servants coupled with the fact that Members of Parliament (MPs) had received an incorrect copy of the draft law at one point, as well as their concerns, have led to the discussions on the draft being sent back to the Central Committee of Parliament for debate.

The draft was being discussed in a public plenary session of Parliament on Thursday when the concerns were raised. United Democrats (UD) Member of Parliament (MP) Sarah Wescot-Williams said the General Audit Chamber had called for a further legal review of the draft in a letter received by Parliament on Wednesday, one day ahead of the continuation of the debate on the draft law in a public plenary session of Parliament. She raised the content of the letter during the final round of the debate on Thursday.

The General Audit Chamber, of its own accord, sent a letter to Parliament asking the legislature to take into consideration several factors and suggesting that a further legal review of the draft be carried out.

Wescot-Williams said she agreed with the General Audit Chamber that the draft law had become “quite confusing.” She said that, amongst other things, it needed to be clear who will be affected by the law. The future of persons who have paid into the fund, and what they are being asked to give up and for what reasons, also need to be made clear.

She said no one wants changes to the pension system to become embroiled in long-drawn-out court battles.

“While I understand that pressure, my recommendations to you – my brief advice directed to Parliament – is that government seriously looks at that advice and sees where necessary changes and amendments can be made.”

A number of other concerns were expressed about the draft by other MPs. Prior to answering the questions posed by MPs during yesterday’s meeting, the Prime Minister said that considering what she heard during the meeting and before answering MPs’ questions, she proposed to postpone the meeting so that she can get a copy of the General Audit Chamber’s comments, as government had not received them.

“We would like to review the document and to see if there are changes, and come back to see when we can caucus again with Members of Parliament to discuss this pressing issue,” the Prime Minister said.

She thanked MPs for their “insight” and requested that the meeting be postponed “so that I can get a copy of document and look at it and make sure that we address the issues addressed by the General Audit Chamber and the issues that MPs stated, and that includes questions [from the unions – Ed.]. I am willing to go back to all stakeholders have a discussion because I too am a civil servant and we don’t want to overlook what the General Audit Chamber has stated.”

The meeting was adjourned and the chairperson of the meeting announced that the draft will go back to the Central Committee for debate.