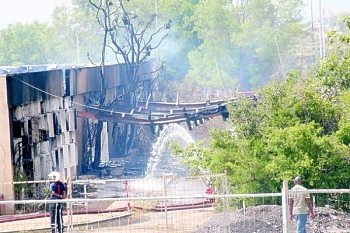 WILLEMSTAD–The majority of Curaçao’s labour unions on Tuesday evening called a general strike for Thursday morning in support employees of contractors working at the Isla oil refinery represented by SGTK who have been on strike for more than two weeks.

The union centrals SSK and CGTC plus several non-affiliated unions also want to protest a law passed by Parliament that limits Government-owned companies, foundations and other public-sector entities in negotiating employment conditions and benefits with their personnel, as well as the public order decree by Justice Minister Nelson Navarro for an island-wide ban on crowds with the intent to demonstrate.

The unions categorically deny any responsibility for Monday night’s fire at the national theatre “Sentro Pro Arte” near the SSK building. The complex burned down because fire-fighters could not get close due to the size and intense heat of the blaze, along with concerns about materials containing asbestos in the abandoned structure.

Navarro and Minister of Social Development, Labour and Wellbeing Ruthmilda Larmonie-Cecilia had been trying to bring parties in the conflict together along with national mediator Randolph Gijsbertha, but to no avail.

SGTK and contractors’ association AAV have already agreed on a two-year collective labour agreement (CLA) with an annual pay raise of six and three per cent. However, the union also demands a one-time bonus of NAf. 3,000 per person to compensate for the lack of a new CLA in 2015 and 2016, while the employers want to give only NAf. 500.

The difference amounts to about NAf. 1.5 million that would have to come from somewhere. The refinery leased to “Petroleos de Venezuela” PdVSA was unable to help, while Government cannot take funds from its energy sector companies to pay the workers as suggested.

Prime Minister Bernhard Whiteman had declared that they could not find a legal way to help the strikers with the money needed. The contractors are private businesses and Government cannot take public funds to pay their employees.

The local unions have now asked all their members to down their tools on Thursday morning, which could practically paralyse the country. If and how they also will take to streets was not immediately clear.

Action committee spokesman Errol Cova visited Governor Lucille George-Wout on behalf of 18 unions to object to the draft national ordinance regulating Government-related bodies they say treads on internationally recognised rights of worker representation and free negotiations, asking her not to sign it. She had not yet received the law proposal that would require scrutiny by the Council of Advice.