Home Local News Generation Hope: ‘We will turn this shattered economy around’ 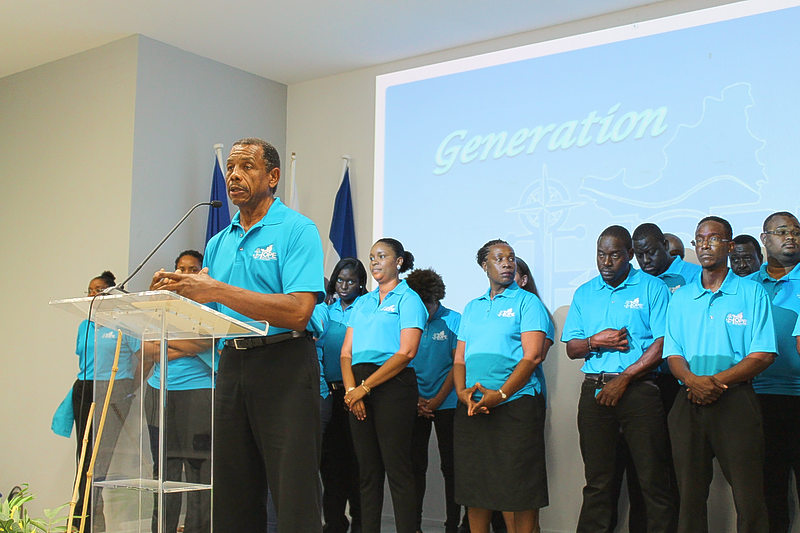 Jules Charville talks at the public meeting where his list to contest the Territorial Election was presented. Members of the list look in the background.

MARIGOT–Independent Territorial Councillor Jules Charville on Friday evening presented the full list of Generation Hope’s (formerly the Hope Party) 26 candidates at a meeting in the Chamber of Commerce.

Generation Hope is one of eight parties contesting the March 19 and 26 Territorial Council elections to choose a new government for the next five years.

Charville was one of the first of the candidates to declare his intention to run for the presidency of the Territorial Council on January 21, 2017.

If first impressions were anything to go by on Friday evening the party looks well organised, from the blue polo shirt uniform to the promotional literature with clearly stated manifesto and mission and vision statements.

But as with all good intentions, time will tell if this party and others can deliver on pre-election objectives and promises.

Charville in his opening remarks indicated he attempted in 2007 to unite politicians in the best interests of making the new status work.

“What came out of that attempt was Rassemblement, Réussite, Responsabilité (RRR),” he said. “However, the politicians that came together to create that name and create that movement of unity lost the spirit of unity very early on. From then on, until today, each of those politicians who were there in 2007 are divided and looking out for their own interests. They have dropped the ball. Why? Because none of them up to this day realise that it is all about the people and not about self.

“That’s why in 2013 I saw a need for a new movement, something new. I felt the need to put something together, a team that would have an entirely new approach. I took the time to locate these persons who are presented here this evening. You will find some young persons, some not so young and others who have a certain age and experience. But together, believe me they form a powerful team that we now call Generation Hope.

“This team is going to turn around our shattered economy and take us to the next level. It is a shame to see today what has become of cooperation between both sides of the island. Generation Hope will give us back what we knew as One country, One people, One destiny.”

It was noted the list could still change as the registration deadline to submit lists is on March 3, at midnight.

More copies of the party’s manifesto printed in English and French will shortly be available at Hope’s campaign offices in Grand Case, Marigot and Sandy Ground.

Thierry Stephen outlined some of the bullet points in the manifesto before the floor was open to questions.

Human Development: adapting an education system to our reality; implementing a university “village” to access higher studies, giving teachers the right training, developing a Marshall Plan to train the population in all types of education.

Social and Health: complete reorganisation of departments for better service, treating the needs of the elderly, youth and children; revision on the management of Revenu Solidarité Active (RSA).