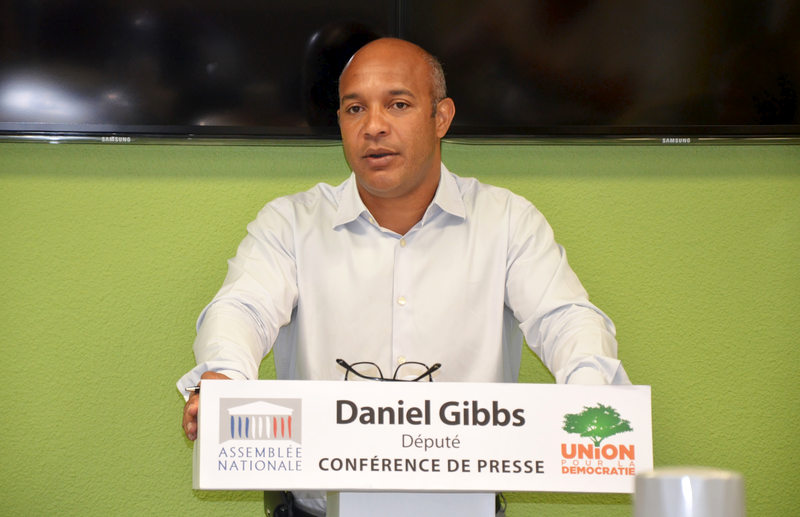 MARIGOT–President of Union for Democracy (UD) and Leader of the Opposition, Daniel Gibbs, announced Wednesday he will run for President of the Collectivité in the March 2017 Territorial Elections to be held in St. Martin.

He stated his accumulated political experience devoted to the service of the community since 2001 as Deputy Mayor in the former Commune, Vice-President of the Collectivité, President of Union for Democracy, and Member of Parliament for St. Martin and St. Barths, has shaped his vision and has become the driving force for a better St. Martin
“It is time for us to use Article 74 of our Constitution which is a wonderful tool,” he said. “It is high time we gave a new meaning to our cooperation with St. Maarten. It is high time we supported our students and it is high time we offered real prospects to all those who are endowed with an entrepreneurial spirit.
“It is high time we convert our so-called handicaps into genuine assets. It is high time our uniqueness and peculiarities of a bi-national island are respected as part of our wealth. It is more than high time that we guarantee our children an education worthy of a clean, secure, highly acclaimed island open to the world.
“All these principles lie at the very core of my commitment as a true citizen and they constitute the backbone of my political project for St. Martin; a project of paramount importance for an island which is far from being common, and which deserves innovative, modern ideas to shine in a difficult context where world competition jeopardizes our jobs and our prosperity.
“After listening to you, taking stock of your needs and your propositions, I have built my project step by step. In the following weeks I will proceed with our district meetings to keep breathing new life into my project until its final presentation in September.
“I intend to carry out this project with the best possible team, composed of honest, competent men and women who are fully involved, who understand the harsh reality of life and who are very concerned for the future of our island.
“As a true St. Martiner, altruism, morals and the sense of justice are values which have been passed on to me by my father. These are the moral beacons guiding my life and my political action. I will be the president who will give our friendly island a better future.
“As a man of dialogue and action, I love my country passionately. I will be the President who will gather the various forces to bring back strength and unity to St. Martin. The ambition of my project for St. Martin cannot be borne alone or by a handful of people of good will: In order to win, St. Martin has to be united. Together, let us make St. Martin a winner.”