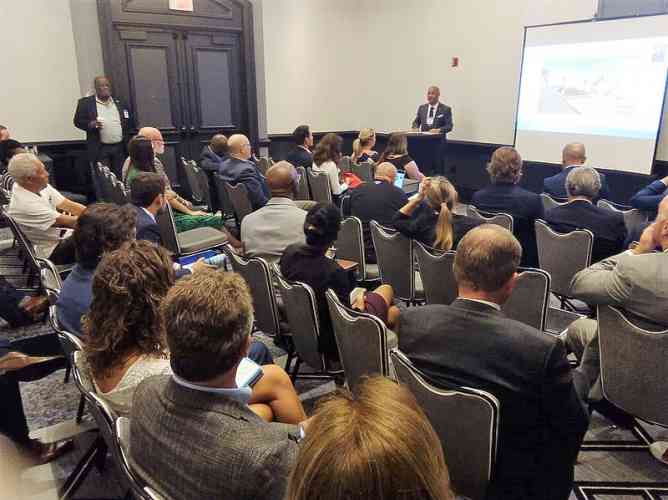 President Gibbs talks to potential investors on opportunities in St. Martin at the CHRIS Investment Summit, Miami, Florida, on May 22.

MARIGOT–President of the Collectivité Daniel Gibbs represented St. Martin on Wednesday, May 22, at the Caribbean Hotel and Resort Investment Summit (CHRIS) in Miami, Florida, exclusively dedicated to hotel investment in the Caribbean.

About 40 people attended the first session devoted to investment opportunities in St. Martin; “Opportunities in the Collectivité of St Martin”, late Wednesday morning.

“Investors showed a real interest in jump-starting the tourist destination and its reconstruction phase,” the Collectivité’s communication department reported. “The President recalled the multiple socio-economic assets of the territory, particularly in terms of legal and institutional stability, and the investment opportunities that arise today, without hiding the problems related to reconstruction. “The President was widely praised for the work undertaken by the Collectivité and its partners, private companies and individuals since Hurricane Irma’s visit, as well as for development projects carried out by the territory as part of its reconstruction and relaunch of the destination.

“The second session: ‘Views from the Heads of Government’, was very popular and welcomed nearly 400 participants (investors, consultants, developers, promoters, etc.) who came to learn about the opportunities offered by the islands of St. Martin and the Virgin Islands, both territories having suffered the hurricanes of September 2017. President Gibbs took advantage of this constructive forum to answer many questions about the reconstruction of the territory, but also about current and future investment projects.

“The exchanges with a very interested audience were fruitful for St. Martin. More than 80 contacts were made by the President and his team and they will be followed up in the coming months by the Pôle de Développement Économique technicians. Some of these interviews are potential service providers or suppliers for companies in St. Martin. A large number of investors have shown particular interest in St. Martin where development continues.

“President Gibbs expressed his satisfaction with this first participation in an investment-related trade fair since September 2017, particularly in view of the interest of participants in St. Martin, which remains an attractive territory in many respects.”