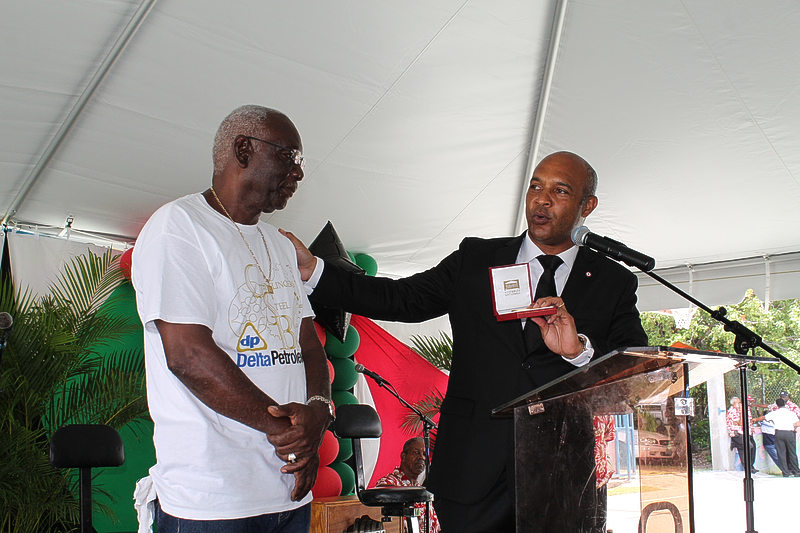 MARIGOT–Member of Parliament (MP) Daniel Gibbs conferred the Député’s Medal on Gunslingers Steel Band founder Victor Benjamin at the close of his speech during the Victor Schoelcher Fête official ceremonies on Thursday.

It was a fitting gesture to honour the association and family-owned group of musicians from Grand Case, not only for their skills at playing the steel pan, but for passing the love of steel pan music from one generation to another.
“Victor has transformed his passion into a cultural and economic asset for St. Martin,” said Gibbs, describing him as a role model. “He and his sons have guided the youth with a certain method and firm discipline.”
Thursday happened also to be Victor Benjamin’s birthday, while President Aline Hanson reminded that former Mayor Albert Fleming’s birthday is on Friday. However, Fleming was not in the audience and appeared to have left early.
Gibbs talked of Victor Schoelcher’s work and his final achievement of abolishing slavery in the French West Indies in1848.
“He was a great humanitarian who defended the great and beautiful idea of freedom,” he said. “To Schoelcher, human life, whether it be black or white, had much more value than economic interests. His arguments at the time were unpopular, of course, because of the economic interests of a segment of the population living off the heinous barbarity that was slavery. But he prevailed in the abolitionist struggle through perseverance.”
Gibbs spoke of the latest terror attacks in France and questioned what guarantees there are for freedom and rights when a St. Martiner is murdered in prison, preventing justice from being served.
“We need to remain dignified and calm so love, peace, harmony and fraternity can take over in these troubled times. I ask you to have confidence in the future and confidence in St. Martin because we need each other to rebuild links that will make St. Martin society strong, brotherly, beautiful and friendly, as it always was. It is more important than ever to walk united, hand in hand,” he said.
Gibbs was one of four speakers. Earlier, outspoken District Council representative Patricia Chance-Duzant fired off a volley of criticism at the leadership of the Collectivité on a number of issues, saying she was not afraid to tell it like it is, anticipating that next year she probably would not be holding the representative position.
“Too many things are wrong in this country,” she said. “The State may consider St. Martin theirs, but as I told a Préfet years ago, every single grain of sand, hibiscus on this island belongs to me, belongs to us, and if we don’t do what has to be done don’t wait for the State to do it, because how many years have we waited already.”
The work of the 50 pas Géometrique commission on land prices, PLU zoning plan, Grand Case beach chair and Orient Beach controversies, the bridge in Grand Case, and the villages’ restaurants were among targets of her criticism.
If elected officials closest to the podium were cringing in their seats at some of her remarks there were no responses in the speeches that followed from President Aline Hanson and Préfète Anne Laubies.
The day began with a church service followed by a small parade on the boulevard. It was led by the Boys Brigade drum band of Marigot which included participants from St. Kitts, Antigua and Anguilla. The Grain d’Or dancers followed behind.
The rest of the day was devoted to traditional games, cycle races, traditional boat sailing and a programme of musical entertainment from the stage on the ball field.