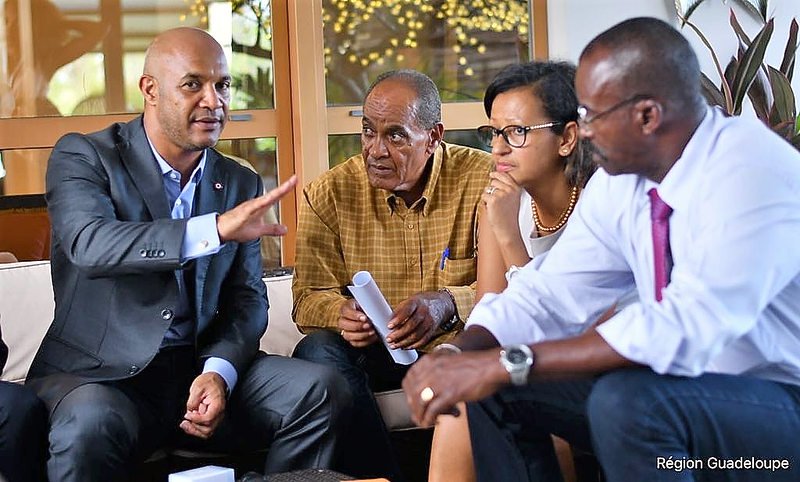 MARIGOT–President of the Collectivité Daniel Gibbs is currently in French Guiana where he is participating in the conference of Presidents of the Ultra Peripheral Regions RUP of Europe where his main objective is to obtain supplementary funds for the reconstruction of St. Martin.

As well as participating in the two major meetings of the Presidents on the RUP programme on Thursday, October 26, for the internal session and Friday, October 27, for the partnership session, he met with President Ary Chalus and Vice-President Marie-Luce Penchard in a bilateral meeting with the Guadeloupe Region.
They discussed making the reconstruction of St. Martin a priority within the scope of the INTERREG Caribbean programme, conforming to the rules of the European Union (EU) and with regard to specific measures that can be put in place when an EU member country falls victim to a natural catastrophe. Credits allocated to St. Martin can be redeployed into this new priority.
The Collectivité can also benefit from European credits in the Plan Operationel Regional de la Guadeloupe. These funds will be directed towards Construction Priority from the Guadeloupe programme, a gesture that Gibbs fully appreciated.
President Gibbs also met European Commissioner Corina Crétu with whom the general situation of St. Martin was discussed following the hurricanes; the extensive damage to private and public infrastructure, the effect on the local economy and tourism and the prospect of a big increase in unemployment, etc.
He presented the Phoenix Plan to the Commissioner in its four phases; reconstruction, relaunch of the economy, assisting the youth to succeed and accompanying vulnerable groups of inhabitants.
He also presented to the European Commission the report on the 3.5 Billion euro evaluation of damages to St. Martin caused by the two hurricanes, requesting that St. Martin be helped financially. He also reminded that it is urgent for St. Martin to have its own European programme.
The Collectivité reported that Gibbs was given an attentive ear by the European Commission and hopes that these first exchanges will bear fruit in terms of substantial aid for reconstruction.
During the internal session at Kourou on Thursday, Gibbs shared his objectives with his European counterparts. At the partnership session on Friday, October 27, in the presence of the President of the Republic Emmanuel Macron and the President of the European Commission, Jean-Claude Junker, President Gibbs is determined to convince them of the urgency to accompany St. Martin “quickly and by hustling through the procedures,” as President Macron had said during his visit to the territory on September 12, 2017.