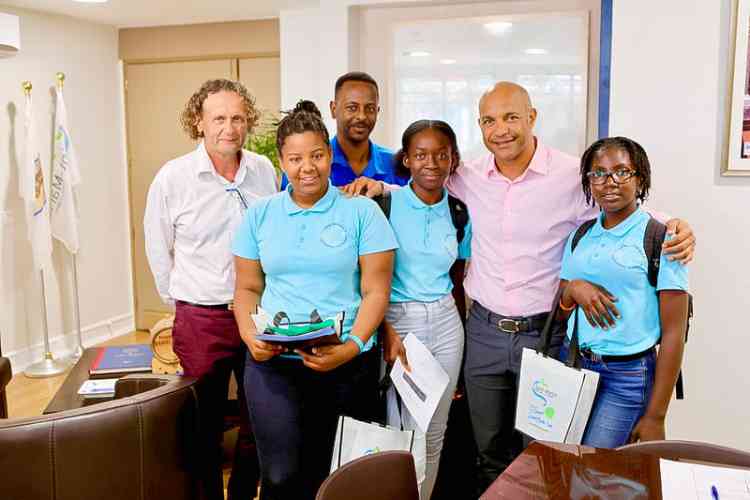 The three journalism students with President Daniel Gibbs, their teacher and Collège Principal.

MARIGOT–President Daniel Gibbs had the pleasure of welcoming three students from a class in Soualiga Collège at Cité Scolaire Robert Weinum on Tuesday, March 12, as part of their studies for Press Week at the school.

Accompanied by the Principal of the Collège, their teacher Patrice Sophie, and Chargée de Mission representing the Recteur of the Academy Evelyne Fleming, the students were asked to conduct an interview on the chosen theme this year, “Information without borders?”Beforehand, Patrice Sophie’s class had learnt about information and communication techniques and the journalism profession by producing a newspaper.

The President of the Collectivité willingly cooperated with question-and-answer exercise by answering three questions about the quality and scope of information, as well as the various communication media. The students played the role of journalists, photographers and interviewers, and will showcase their work in a local newspaper that is devoting a special edition for Press Week, the 30th edition which is being held this year from March 18 to 23.

President Gibbs praised the involvement of the students and their teacher, commenting on how much he appreciated these enriching encounters with the younger generation. He promised to visit the class before the end of the school year.