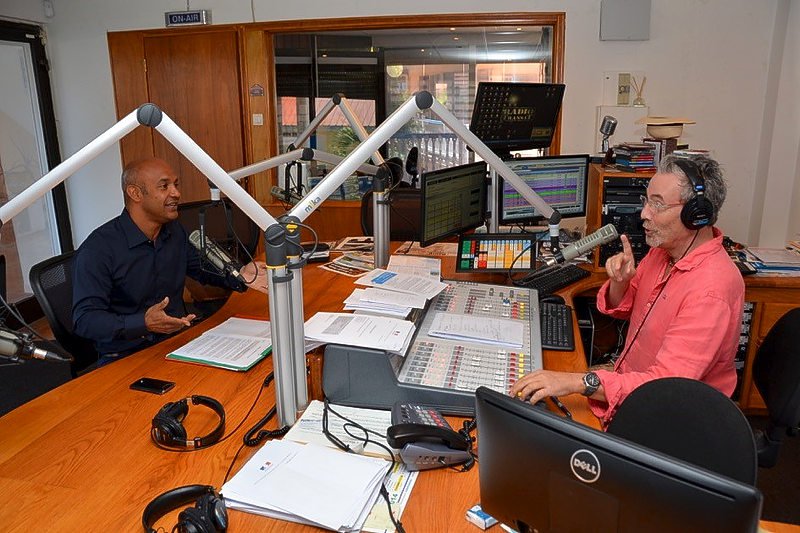 President of the Collectivité Daniel Gibbs (left) during an interview on Radio Transat.

MARIGOT–President of the Territorial Council of St. Martin Daniel Gibbs will soon pay courtesy visits to Governor of St. Maarten Eugene Holiday, Prime Minister William Marlin and President of Parliament Sarah Wescot-Williams, as he comes to grips with the job in hand since taking office on April 2, 2017.

He also plans to meet the new Préfet of the Guadeloupe Region Pierre-Etienne Bisch, Chief Minister of Anguilla Victor Banks, and in early May meet President of the Departmental Council of Guadeloupe Josette Borel-Lincertin, and President of the Region Ary Chalus, on the subject of regional cooperation.

Recently, the President has undertaken a series of visits and protocol meetings designed to make first contact with the territorial staff of the Collectivité and Department Heads and their teams before meeting with community organisations and local institutions.

The visits are designed to “take the temperature” of the territory and will continue through April and May. In the next few weeks important matters will be discussed with dignitaries in St. Maarten and Anguilla.

On Tuesday, April 11, Gibbs met with the President of the Economic, Social and Cultural Council of St. Martin Georges Gumbs and members of his Council. The President stated his willingness to work closely with the Council by regularly seeking its opinion on matters of importance.

Thursday, April 13, the President visited the Chamber of Commerce with his Second Vice-President Yaw Dyuiadzi, where they were received by Chamber President Jean Arnell and his elected officials. The Chamber members were keen to know from Gibbs his plans for economic recovery of the territory among other matters.

Gibbs reiterated the outline of his short-term programme concerning four major audits; tax, financial, institutional and organisational to engage the right reforms to be effective in their respective political actions. The President especially wanted to reassure the Chamber on the support of the Collectivité which will be supportive to local companies. He said creation of an institute of local statistics, in partnership with the Chamber, will be an indispensable tool to guide public policy.

Other visits are planned to the Fire Department (Pompiers) with the Director General of Semsamar, and a meeting with a delegation from IEDOM. A complete tour of the schools will be done in May.