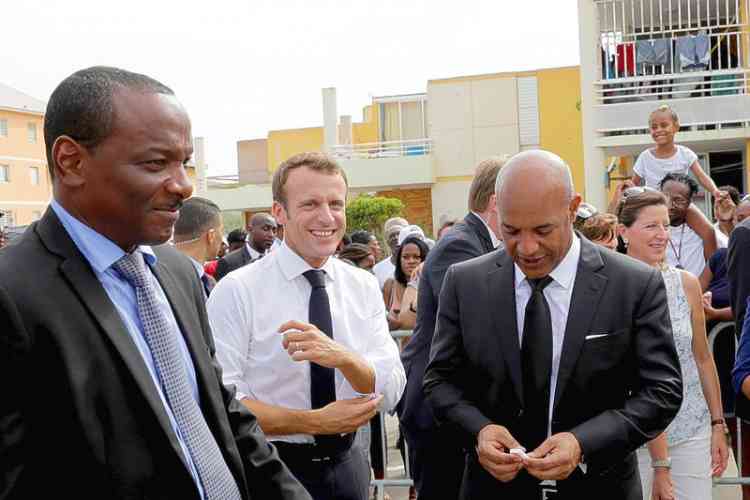 MARIGOT–President Daniel Gibbs, in an analysis of President Emmanuel Macron’s concluding press conference on Sunday, said he was greatly heartened by the President’s support and confidence in him.

Macron had said repeatedly that Gibbs had only been elected to office a few months before Hurricane Irma struck, not only inheriting a Collectivité already in difficulties, but then had to deal with the consequences in St. Martin of the year’s most intense hurricane.

“The visit of the President of the Republic was decisive for St. Martin. The Head of State reinforced his support with concrete and new measures,” Gibbs declared to reporters. “During his speech, the President repeatedly renewed the State’s support and confidence in the President of the Collectivité and his elected representatives. In view of the statements made the day before in French Quarter this is an important clarification for me and I thank him for it.

“We are both on the same page wanting dynamic action; accelerating reconstruction and launching development projects. Like the President of the Republic, I call for rapid and exemplary reconstruction. The Collectivité is there to support the reconstruction, and it is doing so.

“For example, the urban planning services are fully in line with this dynamic, with daily controls in the field of reconstruction and support for St. Martiners. More than 500 interventions have been carried out to date, since the creation of the urban planning policy in early 2018.

“In another example, the Collectivité has committed a budget of five million euros to rebuild the roofs of the houses of vulnerable people, and several projects are currently underway in Sandy Ground and French Quarter.

“With regard to the reconstruction of the 18 public schools, which is the subject of many concerns, I would remind you that we have set up a work schedule following delays by some companies, in order to speed up repair work. The President of the Republic through Préfète Sylvie Feucher, is accompanying us on this project.

“I would add that Mr. Climens-Pons, appointed by the State on the reconstruction of schools, is a valuable listener and support on a daily basis. Working meetings are held regularly with parents’ representatives and teachers’ union delegations. The work is being monitored and progresses.”

Gibbs said the 15 million euros given by the State is not for repair of 18 schools but for construction of a new 900-pupil Collège. Funds for repairs to schools is to come from the 46-million-euro envelope of European Funds, but must be used by December 31, 2018.

“We will focus our efforts over the next three years on rebuilding Thelbert Carti Stadium in French Quarter and Sandy Ground’s Albéric Richards Stadium, which will be our regional competition complex, and the new Sports Palace in La Savane that will replace the Omni Sports Hall (currently under demolition). The teams are fully mobilised to advance these youth projects.

“The Collectivité continues its commitment to cleaning, associations are mobilising and doing exemplary work, but if individuals do not cooperate in this collective cleaning effort, there will still be areas that are incompatible with ecologically sustainable tourism development.”

Gibbs reminded that the local authority had invested 15 million euros, including a first phase of emergency clearance which cost 8.2 million euros. Some 60,000 tonnes of waste related to Irma was collected, 109,000 cubic metres of miscellaneous waste, 20,000m3 of sheet metal, 2,000 car wrecks treated at the eco-site and several collection campaigns carried out for St. Martiners, with free access to the waste collection centres.

“The Collectivité has mobilised a team to raise awareness among those whose private property has not been cleaned up. Controls will be carried out, sanctions will be imposed. We have two months to put this into action.

“The President of the Republic responded favourably to my request to help the Collectivité strengthen territorial management. We have very competent managers, but not enough of them to cope with the scale of the reconstruction. In the long term, five employees of the French Development Agency AFD will be at our side (two are already in positions) to help us redeploy human resources, to award public contracts and to set up the files for structuring projects.

“Within a month, the Collectivité will present its Functional Economic Plan to balance its finances in this time of crisis and falling tax revenues. This savings plan is accompanied by a re-organisation of the territorial administration and a reform of the tax system in St. Martin, reforms that will bear fruit in 2019 and benefit every St. Martiner.

“Crucial advances such as the establishment of a Vice-Rectorat before the end of this year and the revision of the Revenue Solidarité Active (RSA) allocation procedures, announced by the Head of State last Sunday, are all encouraging for the Collectivité. This is a major challenge, we are fully invested in our mandate to succeed. We are pursuing the course we have set together, and we have the support of the French State.”