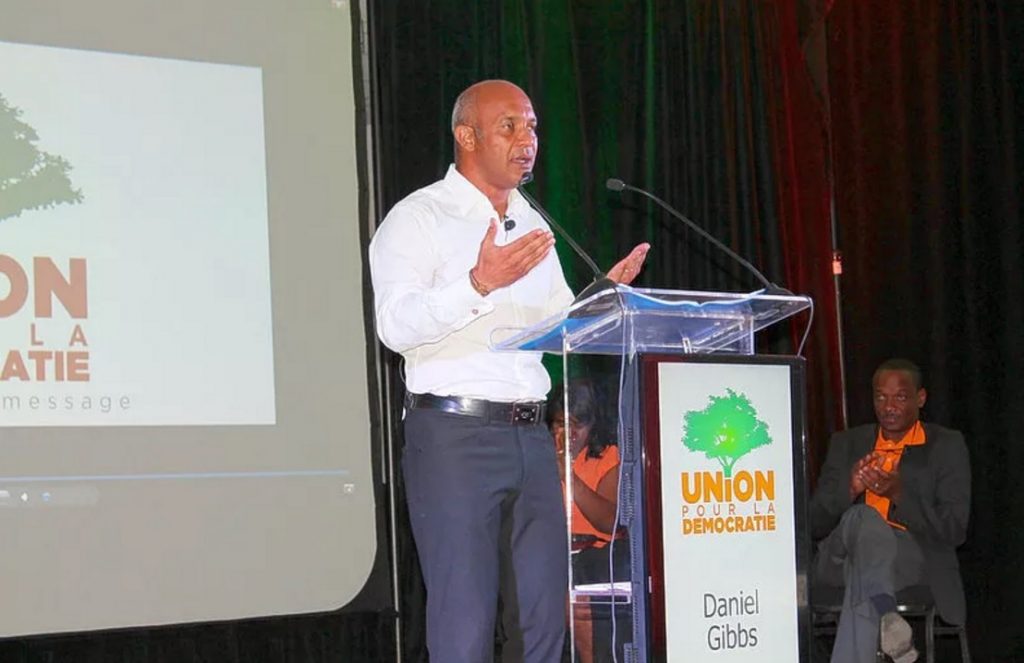 MARIGOT–President of Union for Democracy (UD) Daniel Gibbs set the stage on Saturday night for his big political comeback in 2017 since losing the 2012 election to Alain Richardson’s Triple R party.

It was the first public meeting to announce his candidacy for President of the Collectivité, and in a rousing speech Gibbs spelt out just why he is ready and the right man to lead the country for the next five years.

His speech outlined “what he wants and what he doesn’t want for St. Martin” but the party’s overall manifesto and vision for St. Martin will be divulged later.

Supporters and the party faithful packed into the Riviera One hall in a replay of the 2012 meeting, though this time there was a greater sense of expectancy from a man with five years more experience since the disappointment of 2012.

Estimates stood at 450 persons seated in the hall and another 150 standing. The evening opened with a prayer from Maud Ascent-Gibs and the St. Martin Song.

The major part of the evening was devoted to endorsements from various speakers. Former Mayor Albert Fleming was present as he was in 2012 joining Gibb’s wife and father Dr. Victor Gibbs in the front row but did not speak.

Stephen Patrick made the case for getting to know Daniel personally, saying “you will find that you have much more in common with him than you thought.”

Annette Philips said she has stuck by Daniel since 2007 and his parliamentary experience and contacts will help to open doors for St. Martin.

“He’s a man of integrity and vision. St. Martin needs a man of strong vision. We have been suffering too long. We cannot sit back and let someone else take his place. St. Martin is at the bottom of a valley and Daniel is the only one who can take us out of it.”

Jean-Sébastien Hamlet said thanks to the initiative and support of Gibbs, five years later his association has trained 1,000 youths in St. Martin.

“I’m proud of people who can share their knowledge and experience because it inspires others,” Hamlet said. “The youth wing wants to inspire new entrepreneurs, new projects and contribute to society. Daniel Gibbs gave us this opportunity so let’s shape our destiny.”

Perhaps the most poignant speech of the evening came from Daniel’s father, Victor, speaking passionately in defence of his son, dismissing critics who say Daniel is not a St. Martiner.

“I can tell you Daniel has a special love for St. Martin and his people. He wanted to be a pilot but ended up being a notary. Then Albert Fleming introduced him to politics. I can tell you Daniel will do everything to change St. Martin. St. Martin needs his help. He’s now ready and up to date. The one person who can bring back St. Martin to the height of its destiny is my son.”

Gibbs was greeted with enthusiastic applause when it was his turn to speak.

“We are fiercely attached to democratic participation,” he said. “We want an efficient administration. We want to place the citizens at the heart of our project for St. Martin. It’s why we are proposing a new model for governance….a better government for the people, respectful of St. Martiners and always close to the population.

“We will also work hard on the prickly issue of sorting out the land. Those who are telling you the 50 pas Géometriques can be regulated quickly are liars. This is an issue that is particularly sensitive and complex for persons without titles. It requires mobilisation of all our energy and know-how. But we will get there!”

His long speech, frequently punctuated with “Together, It’s time to act,” received a standing ovation.

A video was shown of various members of the public and taxi drivers explaining why they are supporting Daniel Gibbs.