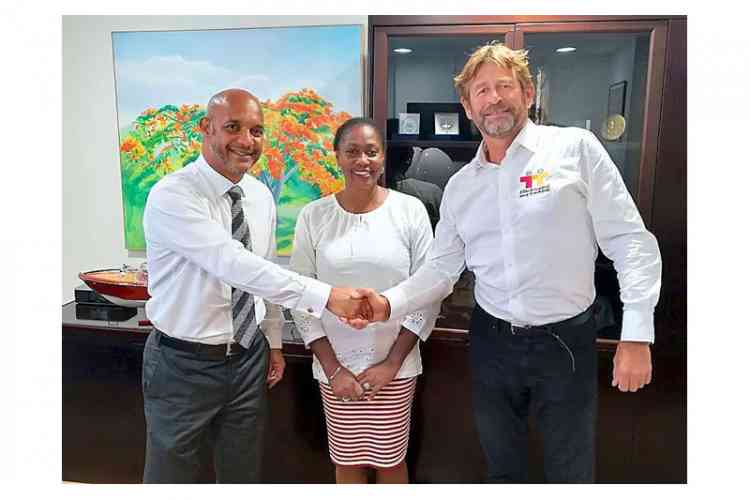 MARIGOT–On Wednesday, October 31, President of the Collectivité Daniel Gibbs and his Vice President in charge of Social Affairs Annick Pétrus received project manager of the Electriciens sans Frontières (ESF) Association Philippe Guistinati for a briefing on the launch of the second phase of intervention by this voluntary association assisting St. Martin.

Philippe Guistinati pointed out ESF’s intervention will be carried within three distinct missions. The purpose is to continue the work of securing houses damaged by Irma in partnership with the Compagnons Bâtisseurs, the French Red Cross, associations and local businesses; create autonomous lighting on Boulevard de Grand Case by installing solar street lamps; and organise training sessions on electrical risks and photovoltaic maintenance.

It will also consider the installation of autonomous lighting systems to avoid post-hurricane blackouts.

These missions are financed by donations collected by Fondation de France for the benefit of St. Martin and by equipment made available to the ESF association by French businesses in St. Martin.

“This partnership between the Collectivité of St. Martin and Electriciens sans Frontières will make it possible to develop renewable energy on our island, a necessity in the event of a hurricane and a moral imperative in the face of global warming,” the Collectivité pointed out in its release. “Renewable energies are also a great opportunity for economic development and local employment.”

Gibbs and Pétrus praised the involvement of Electriciens sans Frontières and the public utility work carried out in the area, which is supporting the reorganisation of electricity and public lighting networks that the Collectivité has launched with its partners.