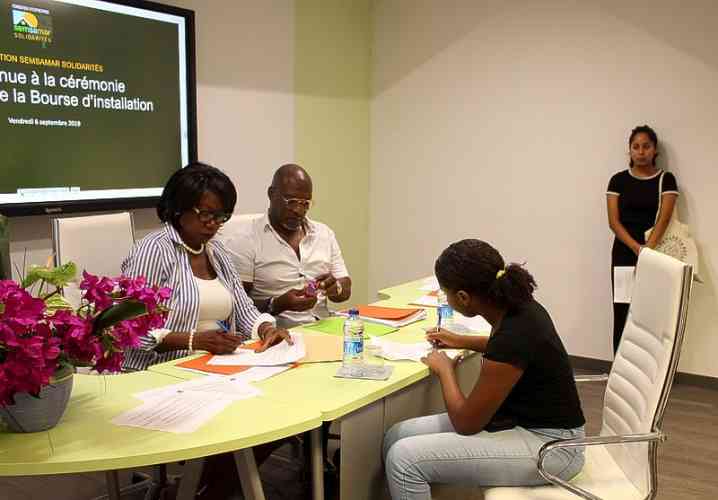 MARIGOT–President Daniel Gibbs accompanied by his Vice-Presidents gathered the press on Friday for a situation report on the second anniversary of Hurricane Irma, to show how far the Collectivité has come with reconstruction.

To begin with, it was an opportunity to share empathy with the Bahamians on their unprecedented disaster, something this island is all too familiar with.

“Back to business as usual? Far from it,” he said. “We are still living today in a degraded and post-traumatic situation. But the Collectivité always “played the game”, in the context of the November 2017 protocols. We did not hesitate to start the gigantic task of rebuilding the territory. It was our priority, our battle, my obsession.

“A lot has been done in two years, but feelings here are mixed, to say the least; feelings which are a mix of resilience and expectations, but also concerns that this territory is considered less of a priority than ever before.”

He noted destruction in St. Martin was estimated at 2.2 billion euros, but that was not reflected in the national accounts because the gross domestic product (GDP) of St. Martin is still not included in the French GDP.

“It’s as if we didn’t exist. Due to the lack of sufficient statistics from Institut National de la Statistique et des Études (INSEE), despite our repeated requests, the Collectivité of St. Martin is not well known and little recognized.”

Gibbs talked at length on different subjects, too many to list here. On the natural risks prevention plan (PPRN), the hot political potato of the moment, he said it has fuelled underlying tension, describing the PPRN as threatening St. Martin with “a social hurricane.

“I am aware that we must, for the future of our children, adapt and reduce our vulnerabilities. I am in favour of a revision of the PPRN but not in this way, with this early application. Once again, I reach out to the State, so that together we can break the deadlock.

“The people of St. Martin have the right to say how they want to live on their land, and above all, to be heard. We are only asking for an additional period of time, which is also short, so that the process of consulting the Collectivité and the people can lead to our proposal for an adapted PPRN.”

”Several public infrastructure reconstruction projects have been launched since the beginning of the year, including the reconstruction of the Marigot market square, the “Carbets” of ‘Orient Bay, Rue de Hollande, redesigning access to Hameau du Pont and Howell Centre shopping Centre, and burial of electricity and Internet networks.

“Other projects in the pipeline are the future Maison des Associations de Grand-Case, development of Place du Tribunal de Marigot, rehabilitation of water and sanitation networks, renovation of the Sandy Ground bridge, repairs at Marina Port la Royale, and rehabilitation of public lighting and video surveillance equipment,” he added.

“The construction of the new 900-pupil College is scheduled to start in 2020, and I have just signed the financing agreement for that.”

“The Collectivité has strengthened its strategic Service; urban planning, human resources, public procurement, and controls; in particular on Revenu Solidarité Active (RSA) and its supervisory capacity.

“At the same time, my administration has been reorganized and strengthened, here and in Paris. The process of regularising and legally securing staff management is a long-term process, which began in 2017, and takes into account the “post-IRMA” dimension, which has had a substantial impact on Collectivité staff, who have shown courage and endurance worthy of praise and respect.”

“SEMSAMAR has also been reformed, as I had promised since my 2017 election campaign. The Collectivité had to give up receiving dividends for 3 years: 2017, 2018 and 2019, and is still awaiting the release by the State of 6 million euros in funding earmarked for the rehabilitation of social housing. An additional effort by the State, in terms of renovation of housing in Quartier d’Orléans and Sandy Ground, will be necessary, however, in the next two years.”

A savings plan to optimize operating expenses was presented on October 10, 2018. Potential savings, mentioned in the report of the Territorial Court of Auditors on the 2007-2016 management, are targeted: purchase procedures, studies, fees, renegotiation of old loan rates, subsidies to associations, etcetera.

“For example, I have just moved the location of Maison de Saint-Martin in Paris for a reduction in rent, as I promised in our programme. This common-sense effort continues, while ensuring it does not have a negative impact on economic growth and purchasing power.

“The Collectivité also plans to draw up a Multi-Year Energy Programme (EPP), co-developed with the State, following the signature of a State/COM/EFD agreement currently under arbitration; it will ensure that the necessary electricity tariff equalisation, which has been in place since 1975, is legally secure.

“In concrete terms, I do not want St. Martiners to pay more for their electricity. This agreement is also intended to provide for application of common law provisions, energy saving certificates, and other assistance.”

“It is essential to make a success of our catch-up in terms of structuring investments… and thus consolidate favourable conditions for private investors. We must make optimal use of public funds to make up for decades of under-investment (I am thinking, for example, of the road network, designed when the Territory was six times less populated than now.

“It must be said that regulation and its punitive interpretation is discouraging. We cannot deprive ourselves of public investment in the name of budgetary and accounting considerations, and drive away private investors.

“The challenges of our territory, today more than ever, remain multiple and pressing. Social and economic catch-up must continue in St. Martin where GDP per capita is barely 50.5 per cent of the French average. St. Martin is still the third poorest Collectivité in France, after Mayotte and Wallis and Futuna.

“With regard to the examination of EU solidarity fund files, which is now the priority of my teams, France has obtained 46M euros from the EU, available only since August 2018. To date, we have forwarded 33.2 million euros in invoices and received only 11.9 million euros in reimbursements from the State.

“Our effort is hampered by administrative difficulties that I recognize we may have underestimated. Our effort is also compromised by different interpretations, rigid texts and demanding procedures, which we were promised would be simplified. Remember the statements made by the President of the Republic on September 12, 2017: I quote: “We must accelerate the procedures and I undertake to ensure that St. Martin is reborn.

“On the amendment to the Protocol of November 6, 2017, which should be finalised at a future Inter-ministerial committee meeting. To date, we are missing 50 million euros in relation to the commitments signed here. The relaunch of a loyal and balanced partnership with the Ministry of Overseas is for me, a priority for the coming months. What we want today, looking at our future in the medium and long term, is to move from reconstruction to development.”

“To benefit from the support of the Caisse des Dépôts et Consignation (CDC) and its “Cœur de Ville” programme, the aim here is to provide the means to renovate the centre of Marigot, including the marinas.

“The Director General of the CDC will soon be visiting St. Martin and I will present our investment projects directly to him. A Medical and Social Centre, Water Authority and part of the port and airport works will be financed by the 60-million-euro “Grand Loan” announced by the Inter-ministerial Committee on March 12, 2018, as well as the demonetizing of the RSA from January 2020, prior to its take-over by the State, following the example of French Guiana, Mayotte and now Reunion Island. Our Collectivité has shown the way by introducing the Cohesia Card.”

For full autonomy, Gibbs said a fully functioning Préfet is required, as well as a branch of the Rectorat in St. Martin. In addition, a branch of INSEE for statistics. Improving the statistical system is essential to access the status of managing authority for European funds in the next programming period 2021-2027.  A strengthening of the services and establishments of a decentralized State is also required. A prison facility for short sentences is needed and a complete Meteo France service.

In conclusion, he said his wish for September 6, 2020, was to discuss plans for a modern, prosperous and welcoming tourist destination, far away from Irma.

“We must therefore continue, despite the headwinds, to adopt the responsible attitude that has always been ours. To be constructive, without giving up, without ever forgetting the need to preserve our unity, our St. Martin identity and our social cohesion.”