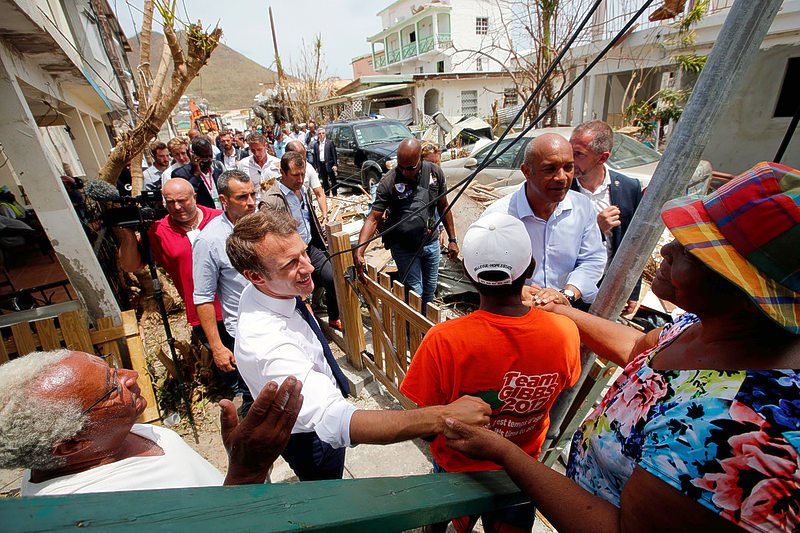 MARIGOT–Aside from negotiating with the French State to secure necessary funding to rebuild St. Martin, President Daniel Gibbs admits he is very preoccupied by the prospect of unemployment skyrocketing now the majority of French-side businesses have been destroyed, looted, or both, after the hurricanes.

Armed with a 300-page dossier of damage assessments and evaluations from the aftermath of Hurricanes Irma and Maria, Gibbs departed for Paris via Guadeloupe on Tuesday for another round of negotiations with President of the French Republic Emmanuel Macron. He was interviewed by Radio St. Martin before boarding his flight.
He stated that the reconstruction estimate is now 2.5 billion euros. “The estimates have been completed, taking into account also what was done between Hurricane Luis 22 years ago and now, but this time we are not mixing the new with the old,” he insisted. “I want new buildings such as schools and public establishments, built to withstand the types of hurricanes we have just experienced.
“What we have done is estimate the cost of reconstruction. We cannot continue with inadequate building codes, inadequate infrastructure for the schools, for example. We have to start back from scratch. And we need to do it correctly. After Luis the rebuilding was done more out of urgency rather than with long-term solutions in mind.
“Secondly, most businesses are not going to make it in the first year, which brings into question what to do with the unemployed. We have discussed this already with the President and he has to come back to us with a proposition. I have also met with the business professionals and we have validated a solution on our end which we will present to him [Macron – Ed.].
“We need to know how quickly we can get an answer, because the end of the month is already here. Unemployment is what we will face first and it concerns families. It’s a priority for me. If we are not careful massive unemployment could be very problematic for St. Martin. It‘s about finding the easiest and quickest solution to either ease unemployment, deal with reimbursement or find a way for companies to keep their employees. This doesn’t include those who were unemployed before Irma. They are already taken care of.
“With regard to the looting, the insurance doesn’t cover this completely for reimbursement so we are hoping to be compensated in part by the State and in part by the insurers. All these steps are important for restarting the economy.”
Asked whether any special measures will be offered, or requested, to help businesses recover, Gibbs replied:
“I certainly do not see myself asking for taxes, direct taxes, to be paid now, but that is a matter for the State. What we have asked for is a total exoneration of social charges for the next four years to help reboot the economy.
It’s vital that businesses can re-employ and that requires flexibility. That flexibility is part of waiving social charges and part of tax relief on the part of the Collectivité. Fiscal reform was something we were working on before”, Irma but now because of the circumstances that process has been accelerated.”
Gibbs said that despite the critics he is staying positive and looking forward.
“Thanks to the solidarity of St. Martiners, things are moving quickly. The positive things need to be mentioned, such as the people who volunteered to help without asking for anything in return. This is what energises me to fight for my country. I’m focused on what I can get for St. Martin and St. Martiners.”
Gibbs will be meeting with President Macron, Prime Minister Édouard Charles Philippe and Overseas Minister Annick Girardin, among other Ministry officials. He is due to return to St. Martin on Monday, October 2.