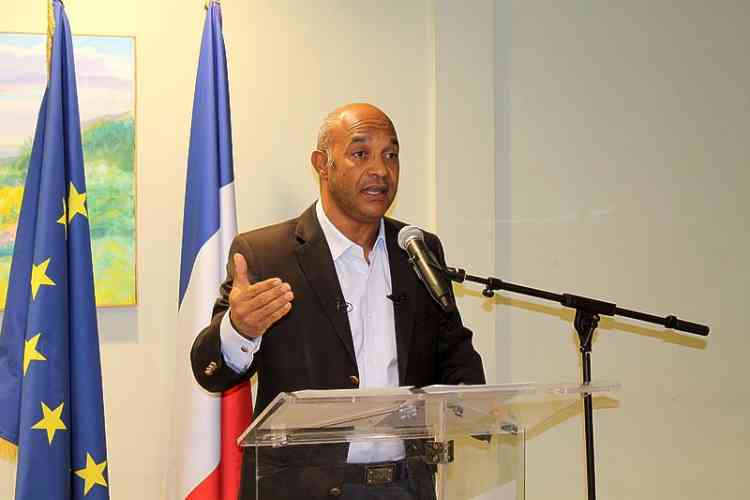 MARIGOT–President of the Collectivité Daniel Gibbs convened a press conference Thursday to go over the news-making events of recent days and weeks and to state the Collectivité’s position on the issues.

“I have heard the legitimate concerns and grievances of our fellow citizens about reconstruction, I have also taken into account constructive criticism, but dismiss those who attack me for purely political purposes,” he began. “I can understand the frustration, I can hear the anger, but what is intolerable is the lack of respect for my position and that of my elected officials. But I am doing everything possible with my elected representatives to ensure the successful reconstruction and to explain our action.”

“As you know, to ensure the successful development of St. Martin, action must be taken at several levels: For those who say that we are not doing anything for the training of young people, I answer that with this; a Territorial Training Plan has just been launched by the Collectivité which makes 30 training courses available to the public in fields of activity chosen according to the needs of local companies.

“Tourism is the lifeblood of our development that will bring employment to younger generations. This is why we are working with the port authorities and tourism office on promotion of the territory. Yes, it requires regular travel to promote St. Martin abroad to sustain and build our network of influence on travel operators.

“And on the question of tax, a tax reform will make it possible to introduce a tax system that is both more balanced for our fellow citizens and more attractive to investors. Territorial Councillor Marie-Dominique Ramphort is in charge of this task and she will have the opportunity to communicate when the time comes on the progress of this reform.

“With regard to functioning of the territorial administration, the reform is under way. We must remove administrative dysfunction, poor management habits and inappropriate behaviour. We launched an important work to redo a new organizational chart. It will be presented to the technical committee next May. This new organization takes into account training needs for our employees and the need for executives to move this Collectivité forward.”

Visit of the French Overseas Minister:

“We had a long discussion on the reconstruction of schools and the financing of this work through the European Union Solidarity Fund (EUSF). The minister announced that she was in favour of letting St. Martin have the exclusive “drawing right” on the 46 million euros until August 31, 2019. This two-month delay will allow the Collectivité to finalize investments in school reconstruction during July and August.

“Contrary to what I have heard, the refurbishment of sports infrastructure is well on track. 3 million euros of work has been undertaken and we are making concrete progress on these priority projects. The minister indicated that we can sign an amendment to the November 2017 protocol to help us accelerate reconstruction and be compensated for the 25-million-euro loss over 2018.

“This is also a significant decision for the financial balance of the Collectivité. A concerted effort will be undertaken with Préfète Sylvie Feucher and her teams to jointly implement this financial review of our budget.

In anticipation, the Collectivité’s Financial Affairs Department has already worked on concrete solutions that will be proposed to the Préfète. In summary, the Minister reiterated the State’s willingness to support our investment projects, some of which are under way now.

“The Minister confirmed that we have “lost” 25-million euros over the 2018 financial year but the good news is that for 2019 – and also 2020 and 2021 – the envelopes will be available to help us and support our investment projects. It is up to us to set up a strong administration to manage the operational aspects. Tax revenues are encouraging but the financial health of the Collectivité is still fragile. We still have a gap of more than 30M euros compared to the revenues before Irma.”

“We discussed the operational programme for cross-border cooperation and the joint sanitation project. The common desire is to implement a rigorous agenda to avoid losing funds from the respective funding agencies EDF and ERDF.

“Bilateral agreements between the State and St. Maarten will soon be signed on maritime traffic with Anguilla / crisis management / and fire-fighting. This is an important step forward, because the pooling of resources in these areas is essential. Authorities have also stepped up police and customs cooperation to combat criminal networks and drug trafficking.”

“We have exhausted the discussions, negotiations and mediations on the issue of the 16 workers that the UGTG union wants to integrate into the territorial civil service. The situation is blocked at this level and it is not for lack of seeking solutions or lack of being willing to talk and negotiate.

“We clearly explained to the union at the meeting in the Prefecture the proposal for the training of these 16 people. I don’t know if these people realise what they are losing by rejecting the offer. The proposal of Pôle Emploi to set up qualifying training courses paid at the same salary as they received at CTOS is very reasonable.

“I invite the 16 again to think about the proposal made to them because it would not only allow them to have an immediate salary but also to find a job at the end of their training.

“I would like to mention that we have signed a memorandum of understanding (MOU) with the UGTG union which is a considerable step forward for territorial employees. We are the first local government to have accepted the review of employee careers and implementation of the compensation scheme. It is a right for the employees, it was deserved and we did it despite the financial difficulties.

“This agreement concerns all territorial employees and represents a considerable sum to be charged to the functioning of the Collectivité, actually several million euros over the next three years. I do not want this agreement to be ignored under the pretext that the union only focuses on hiring 16 people.

Despite this advance, we can only regret the blockades at the Collectivité’s services. By trying to prevent it from working, the strikers are slowing down the files and therefore the agreements that have just been signed in their favour.”

“The situation of our elders and Bethany Home has also been mentioned in the striker’s list of demands. This is a real concern. I met with Bethany Home employees to reassure them. We had a long discussion and they told me about their concerns. I understand their fears because with the creation of the medico-social centre they are wondering about their future.

“I want to reassure them the medico-social centre is a major project for the territory in which they will have their rightful place. We badly need this structure. That is why the Collectivité is working with the Regional Health Agency ARS to get it off the ground in 2021.

“This centre will include a 60-bed residence for the elderly, a disability treatment centre with several care facilities. In the meantime, Bethany Home has been under construction since October. I agree this project has taken too long but it will be delivered in September.”

“First of all, there is no fast track treatment for one part of the population. The rules apply to everyone. As early as January 2018 we announced new urban planning rules. The aim was to simplify procedures and allow a quick start to the reconstruction. We created the Irma Preliminary Declaration in force until March 31, 2019. This authorisation is valid for two years and renewable for one year. Owners therefore still have time to start their work. Since April 1, 2019, we have fallen back into the common law urban planning rules: i. e. the Preliminary Declaration for Repair Work – the Building Permit for Reconstruction Work or New Construction – the Work Authorization for Establishments receiving the public.

We have set up Town Planning Offices in each district to listen and inform the population about the procedures. Since Irma, we are in a permanent dialogue with the inhabitants on urban planning issues.

“We are currently in a position as observers regarding this plan. Like all of you, we will listen carefully to what the State tells us since it is responsible for the environment. This is the beginning of public meetings. We all have to attend. It will, of course. be necessary to be vigilant when the time comes over what will be recommended for the future of St. Martin.”