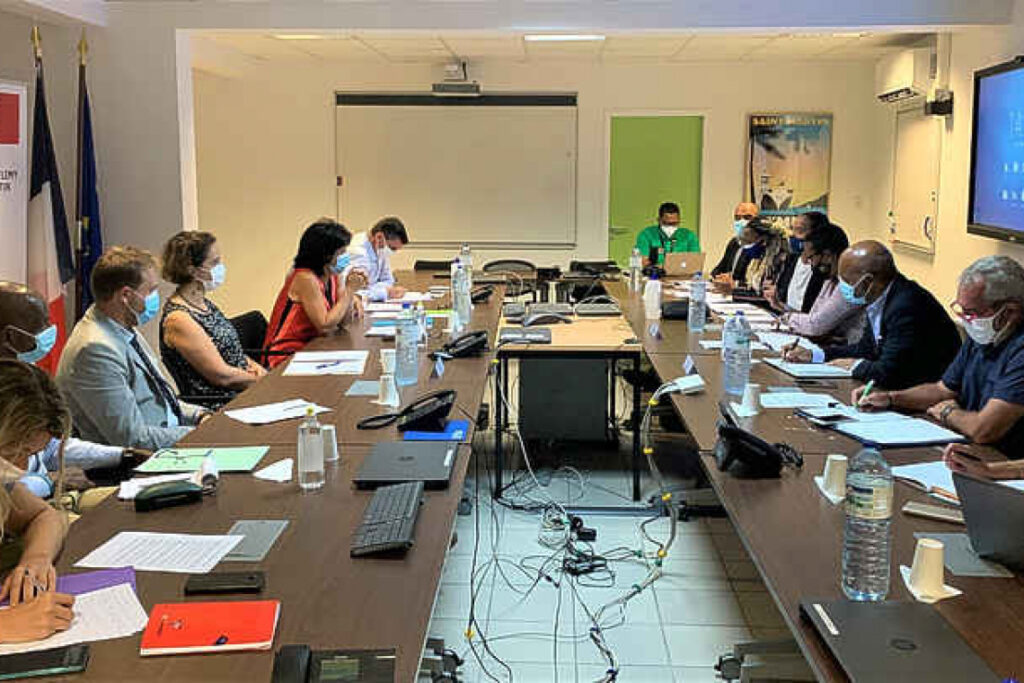 Joint cooperation meeting in progress in the Préfecture.

The respective health authorities of the State and St. Maarten discussed implementation of joint health protocols for both sides of the island as part of the fight against the spread of COVID-19. The creation of a joint screening centre and application of similar sanitary rules were part of the discussions.

Gibbs, who has been calling for this cross-border cooperation for several months, urged the health authorities to act quickly by implementing a health cooperation protocol as soon as possible. Denux said she would make a concrete proposal to the Prime Minister by the end of next week.

French Minister of Solidarity and Health Olivier Véran placed Guadeloupe in a maximum alert zone and closed bars and restaurants temporarily on the island from Monday, September 28.

While positive cases have dropped significantly on both sides of St. Maarten/St. Martin and restaurants are open, protocols are already strict for establishments on both sides. Gibbs said it would be inappropriate to apply such a restriction but preferable to harmonise prevention protocols.

Gibbs also insisted on the need to reinforce prevention actions and health protocols on the territory to contain the spread of the virus, to confirm the falling statistics recorded in recent days, and to allow socio-professionals to remain in business to save their companies.

“While we have been calling for this cooperation since March, it is now urgent to enter fully into a phase of concrete health cooperation with St. Maarten,” he said.

He expressly requested harmonisation of forms and screening protocols, notably on the mandatory testing time for entry into the territory (72 hours for European countries, 120 hours for St. Maarten).

Health authorities should meet as soon as possible to determine technical arrangements for implementing the joint measures (operating mode, location of the screening centre, financing of operations, introduction of a rapid test at Princess Juliana International Airport and Grand Case L’Espérance Airport.

Both Gibbs and Jacobs reiterated their joint priorities: protect the population, revive the economy without relaunching the epidemic. On the latter point, everything depends on the behaviour of citizens.

“If we want to prevent new restrictions on bars and restaurants from being extended to St. Martin, we will have to act responsibly, be even more respectful of barrier measures in public spaces and within families, to prevent the epidemic from spreading,” concluded Gibbs.

A release from her office quoted Jacobs as being “very satisfied” with the outcome of the meeting, as much agreement and willingness for collaboration were expressed by both parties.

Jacobs looks forward to the technical outcome of the follow-up meetings which could lead to the establishment of a framework that can improve synchronisation of measures and ensure free movement around the island.

“As commonly agreed during the meeting, despite our two parts, we are one island. Thus, the need for coordination of our approach to combatting COVID-19 is paramount,” Jacobs said. “Throughout the varying measures taken by both our sides, our health agencies have continued to work together diligently based on the parameters of our memorandum of understanding (MOU).

“As we move into this new phase, we both mutually agreed that finding common reference points and indicators to addressing the pandemic is best for the long-term health and socio-economic relationship between our two sides.”

St. Maarten’s active cases decreased tremendously over the past several weeks due to raising awareness in the community and to the commercial business closures that lasted one month.

“Though testing capacity remains more of a financial and human resource challenge, St. Maarten Medical Center’s COVID-19-related admissions have been consistently low over the past seven weeks. As such, it is now known that to overcome the fight against COVID-19, it is not about not moving, but more about moving smart,” Jacobs concluded.