Home Headlines & Top Stories Gibbs: ‘We cannot talk of reconstruction without knowing how to manage risks’ 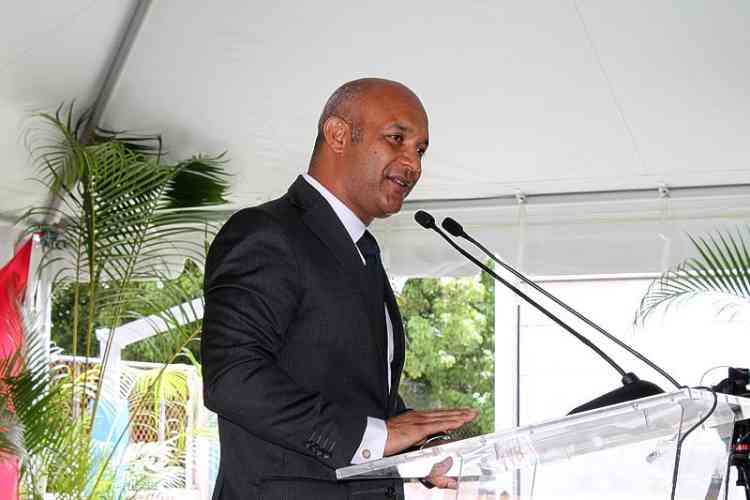 MARIGOT–President of the Collectivité Daniel Gibbs covered a lot of ground in his hour-long New Year’s speech at Hotel de la Collectivité on Monday, talking at length on the five phases of the Phoenix Plan, the short- and long-term plans for recovery of the territory, preliminary actions for the Grand Marigot revitalisation project, management of the districts, tourism strategy, plans for diversifying the economy, and security.

With Dutch St. Maarten Governor Eugene Holiday, President of Parliament Sarah Wescot-Williams and new Prime Minister Leona Marlin-Romeo present, it was an opportunity for Gibbs to express his sincere wish that the Dutch side “returns to stability” after the February election so that he can work with the new government on the French and Dutch United Congress for cooperation.

He talked of a multi-annual investment and catch-up plan for development projects and remedial work on the shortcomings observed in the transfer of charges since 2008. There will be a rehabilitation of the urban planning rules and simplification of procedures to facilitate reconstruction, and this week there will be a presentation of the Carte des Aleas (new map of risk zones) drawn up by the State, with Gibbs presenting the Collectivité’s new urban planning rules in relation to the map.

“Our objective is to simplify procedures, to permit each inhabitant to live in security even in zones most exposed to hurricane risk,” he said. “The objective is to authorise reconstruction, but with calculation of risk in mind. Agreed, reconstruction of homes demolished along the coastline is a complex subject. The current planning rules sadly do not reflect the reality of the territory: that we are in a zone of potentially intense hurricane activity, so procedures have to change.”

The Phoenix Plan has five elements: reconstruction, economy relaunch, security, success and accompaniment of the population.

He said an investment amount of 200 million euros is in the 2018 provisional budget. From this, 30 million euros will be spent on reconstruction of schools, 2.5 million on renovation to stadiums or sports grounds, 20 million on public lighting and water and drainage networks, 6 million on the road network and 8 million on urban improvements.

A major beach-cleaning campaign will be undertaken over the whole territory with beautification and planting of greenery on the main arteries of the French side.

As far as the Grand Marigot project is concerned, a first phase is to reorganise parking between Oiseau Rare up to the Methodist Church and re-organising the waterfront. There will be development in Grand Case and on its waterfront to enhance its tourism and heritage assets. Work will also start on lengthening the runway at Grand Case Airport.

A Territorial Housing Plan will constitute a foundation of the planning policy for the next 15 years with development of villages and economic attractiveness for a quality and safe environment for St. Martiners in terms of facilities:

In the coming weeks, the Collectivité will open bidding for long term development of Sandy Ground and French Quarter. That will also extend to Cul-de-Sac, Baie Nettle, Orient Bay and Oyster Pond. In this context the Collectivité will be accompanied by specialists in urban and social issues.

Gibbs mentioned the creation of a public transportation network to complement the private network, recruiting of a “City Manager” to liaise with merchants and activities to organise entertainment and animations, and developing fishing, agriculture and livestock breeding.

He said Territorial Police stations will be constructed in Sandy Ground and French Quarter and schemes such as “Neighbourhood Watch” and “Vigi Commerce” will be implemented for additional security of citizens and businesses. A new police station will be installed in the future socio-cultural and administrative centre.

On tourism, he said a five star 200-room hotel for La Belle Creole and a prestigious international brand hotel for Happy Bay are still in the cards, as well as development of upscale cruise tourism and intensive marketing to invite tourists to rediscover St. Martin.