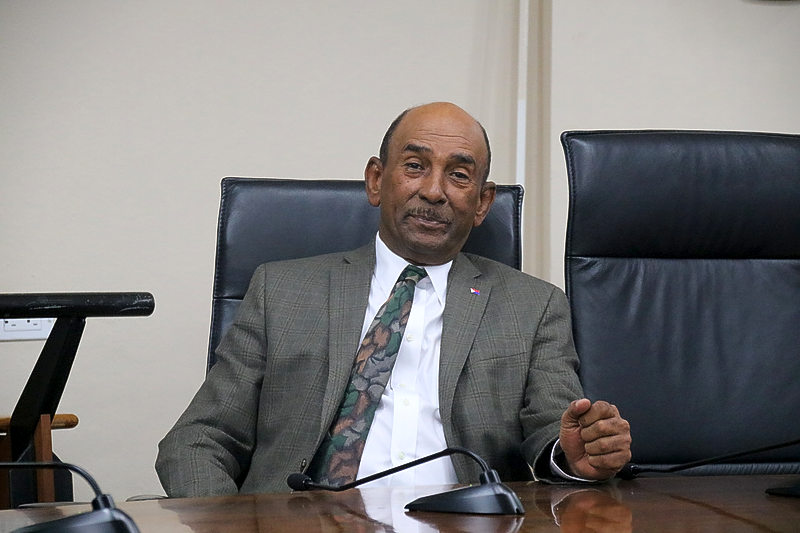 PHILIPSBURG–Finance Minister Richard Gibson has set his aim on making the country completely free of its past debt by 2018. He told Parliament on Monday afternoon after he tabled the 2017 draft budget for approval that on the current trajectory the pending NAf. 191 million in backlog debt could be paid off by 2018.

The draft budget, totalling NAf. 478 million, has a total of NAf. 20 million “in reserve” to service past debts. That reserve puts the operational budget at NAf. 458 million, the exact amount of projected Government expenditure. The draft budget has some NAf. 430 million in regular income and NAf. 48 million in “non-reoccurring” income.

Some NAf. 24 million is projected to be put in reserve in the 2018 budget according to the multi-annual budget.

Revenues in the multi-annual budget are projected to be NAf. 485 million per year. A number of structural revenues are budgeted for 2018. This involved additional tax revenues as results of the planned investment in the tax administration, dividends payments from Government-owned companies and additional revenues from new sources, said Gibson.

Government, he added, plans to introduce a departure tax in 2018.

Government suffered a deficit of NAf. 18.4 million which has to be compensated for in 2019. This compensation will impact the 2019 budget.

To create more space in future budgets, Government has to invest in its tax administration, reform the tax system, make the social fund sustainable, adopt policies to control the expenses of Government-owned companies and increase the retirement age to 65. Together with moving the retirement age, Gibson said a move needs to be made from “end salary to average salary.” He intends to submit legislation on this approach in the coming year.

If the 2017 budget is approved it will be the second consecutive year the country has “balanced its budget,” said Gibson. “The 2017 budget is balanced and substantially meets all the requirements and demands contained in the instruction from The Hague for St. Maarten to get its financial house in order.”

All ministers spoke about the challenges of working under the strict budgetary conditions, but still making significant progress in various areas.

Tourism and Economic Affairs Minister Ingrid Arrindell told MPs that the country has seen stayover visitors of more than 500,000 so far for the year. This presents an increase of some six per cent since 2014.

Although, cruise tourism numbers are contracting, it is still significant compared to other islands, she said, calling for Government to consider giving incentives to cruise ships to ensure they keep calling here and to be mindful about the opening up of Cuba and what it can to do to the local sector.

MPs Tamara Leonard, Franklin Meyers and Claret Connor, all of the United People’s (UP) party posed questions to the Council of Ministers before the day’s session was closed off by Chairwoman of Parliament Sarah Wescot-Williams.